Yeah, that place out 'there'. Anything not really Cambodia related should go here.
Post Reply Previous topicNext topic
2976 posts

The World Health Organization on Monday admitted an error in its assessment of the global risk of a deadly virus in China, saying it was "high" and not "moderate".

The Geneva-based UN health agency said in a situation report published late Sunday that the risk was "very high in China, high at the regional level and high at the global level."

50 million in lockdown and the army deployed.

Increasingly drastic anti-disease efforts began with the January 22 suspension of plane, train and bus links to Wuhan, a city of 11 million people in central China where the virus was first detected last month.

Makes the flight from Wuhan to Sihanoukville on the 24th, 2 days after the lockdown started, an interesting case....
Top

Mishmash wrote: ↑Tue Jan 28, 2020 12:10 am They are not gonna lock down more than the population of the UK unless for a damn good reason.

Indeed, to try to contain the spreading of the virus.
And, so far, they've been pretty successful.
Have you noticed that there is NO human-human contamination, outside of China (or even outside the province of origin, but I'm not a 100% sure of that)?
ALL confirmed cases outside of China (and most outside Hubei province I think) can be traced back to having been in/around Wuhan recently.

There is absolutely no reason to panic, and keeping your family inside in Cambodia is way over the top.

Interesting observation, but not really valid until at least 14 days after the first case outside of China was detected. Maybe human-human contamination did happen outside of China but we don't know yet.
Top

Doesnt give any detail of medical research source so please take at face value.!!!


I know this is a type of flu virus. Outbreaks of flu are usually seasonal in the colder months.
Top

paparazzi wrote: ↑Tue Jan 28, 2020 8:01 am The virus weakens at temperatures above 20 degrees Celsius, especially when it gets above 25 degrees Celsius with high humidity.

Doesnt give any detail of medical research source so please take at face value.!!!


I know this is a type of flu virus. Outbreaks of flu are usually seasonal in the colder months.

Winter colds are triggered usually by common viral infections in humans, germs called rhinoviruses. Rhinoviruses seem to survive best in colder weather. Higher surges of the rhinoviruses peak from September and then typically dwindle down in May. Summer months cause a shift in the viral landscape.

The World Health Organization hasn’t declared the virus spreading from Wuhan in China an international emergency, but the effort to contain it spans the globe. The Chinese government has implemented the most ambitious quarantine in modern times, as health care workers knock on doors in search of infected people and travelers are scanned for signs of fever. The effort is complicated by a stealthy incubation period of up to two weeks -- during which time the infected person may have no symptoms but still be contagious -- as well as the challenge of identifying those with such mild cases they don’t realize they are ill. Here’s a breakdown of the work to rein in what’s been dubbed 2019-nCoV, for 2019 novel coronavirus:

Within China: Officials said they will track down people who left Wuhan, a city of 11 million, ahead of the Lunar New Year holiday, especially the many migrant workers who headed back to the countryside to celebrate with their families. They will be registered, visited frequently by medical personnel and taken for treatment if symptoms develop. Xinhua reported that health officials in Beijing asked those returning to Wuhan from anywhere to stay at home for two weeks, record their temperature and seek treatment if they develop a cough or fever.


Airports globally and border crossings with China have implemented monitoring systems including thermal scanners and questionnaires in an effort to catch cases early. In the U.S., arriving passengers from Wuhan were funneled to airports in California, New York, Atlanta and Chicago, where they were checked for signs of a fever. The drawback to this approach, however, is that it does not catch people who have been infected but are still in the incubation stage, and it may miss those whose primary symptom is a cough, not a fever. The passengers are given cards with details about what to watch for. Social media and traditional news outlets have also spread the word. The first two patients identified in the U.S. sought medical attention on their own accord because they were concerned that they might be infected, showing that awareness levels are high.

When a new case is identified, the patient is put in isolation, often in a hospital, to prevent him or her from spreading the germs. A medical worker takes a thorough history, trying to identify every person who has been within 6 feet (2 meters) of the patient since symptoms emerged. According to the WHO, Chinese authorities place close contacts (family members and others living in the patient’s home, co-workers, possible care-givers and others) under medical observation, which may include isolation at home with regular temperature checks. If there are no symptoms after 14 days, the contacts are released, the WHO said. Other potential contacts could be neighbors, fellow passengers on public transportation, people who attended the same social events, shopped or visited doctors at the same time. Breaking the chain of transmission is what officials believe will ultimately curtail the outbreak and prevent a pandemic, which is an epidemic of global proportions.
AD

Isolation is a tricky issue because it’s unclear how well it works or if it’s been put in place quickly enough. The most critical time for isolation is when an infected person sheds the virus, essentially putting it out into the world. Scientists are still trying to determine how this virus sheds. Often it’s when the infected patient is experiencing symptoms, with the virus being spread via the droplets spewed from a cough or sneeze. But Ma Xiaowei, the director of China’s National Health Commission, said on Jan. 26 that, “from our observations, the virus can be contagious during the incubation period,” which he said was “very different” from SARS, or Severe Acute Respiratory Syndrome. He didn’t elaborate on the observations or mode of transmission. The prospect is a frightening one, since asymptomatic carriers could be widely and unknowingly dispersing the pathogen.

Some of the most vulnerable people are the health care workers caring for seriously ill patients; 15 cases occurred among workers at a single hospital in Wuhan. In the U.S., people who are flagged for possible concern, including the close contacts of known patients and feverish airline passengers, aren’t being kept in formal isolation, though they are asked to limit their exposure to others.
Full article here: https://www.washingtonpost.com/business ... story.html
Top

Wuhan on lockdown my ass,

The cases are still rising exponentially

You are more likely to die than recover apparently 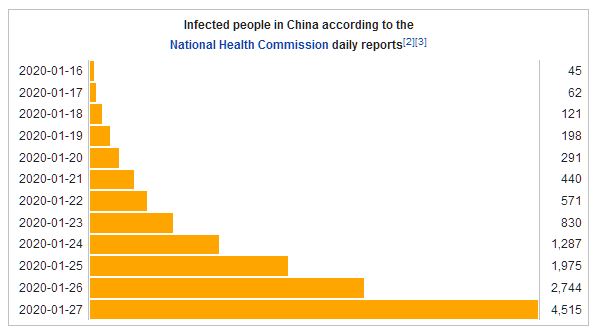 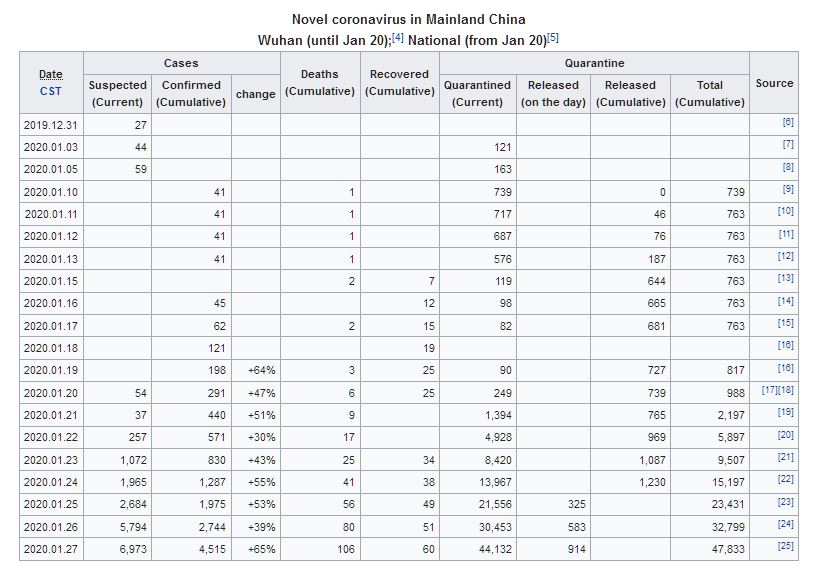 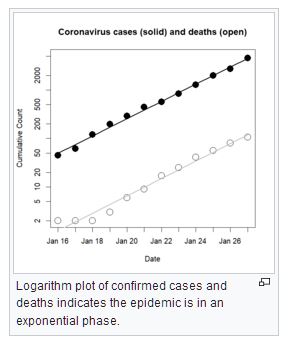 Yeah Dave - Totally weird and contradictory to the 'official' narrative.

Users browsing this forum: No registered users and 388 guests