"This is a crisis situation in health services. The number of medical personnel who have died continues to grow and is increasingly worrying," said Ari Kusuma, deputy chairman of the association's mitigation team.

The majority of doctors who died came from East Java (32 doctors), followed by North Sumatra (23), Jakarta (19), and West Java (12).
Xinhua/Fresh News
Cambodia Expats Online: Bringing you breaking news from Cambodia before you read it anywhere else!

World sees record 400,000 new cases in a single day
17 October 2020 (Guardian)
Global coronavirus cases rose by more than 400,000 for the first time late on Friday, a record one-day increase as much of Europe enacts new restrictions to curb the outbreak.

Europe, which successfully damped down the first surge of infections, has emerged as the new coronavirus epicentre in recent weeks and is reporting on average 140,000 cases a day over the past week.

As a region, Europe is reporting more daily cases than India, Brazil and the US combined.

Of every 100 infections reported around the world, 34 were from European countries, according to a Reuters analysis.

The region is currently reporting a million new infections about every nine days and has reported more than 6.3 million cases since the pandemic began.

Major European countries - the UK, France, Russia, the Netherlands and Spain - accounted for about half of Europe’s new cases in the week to 18 October.

France is reporting the highest seven-day average of new cases in Europe with 19,425 infections per day followed by the United Kingdom, Russia, Spain and the Netherlands in the list of worst affected European countries.
https://www.theguardian.com/world/live/ ... e-recorded
Cambodia Expats Online: Bringing you breaking news from Cambodia before you read it anywhere else!

Let’s put all the affected people on steroids and watch them feel better.

Not checked in on this thread for a while so forgive me if my post has been covered already.

Ok here is a time line of my thoughts and actions on reading the news story as posted above. 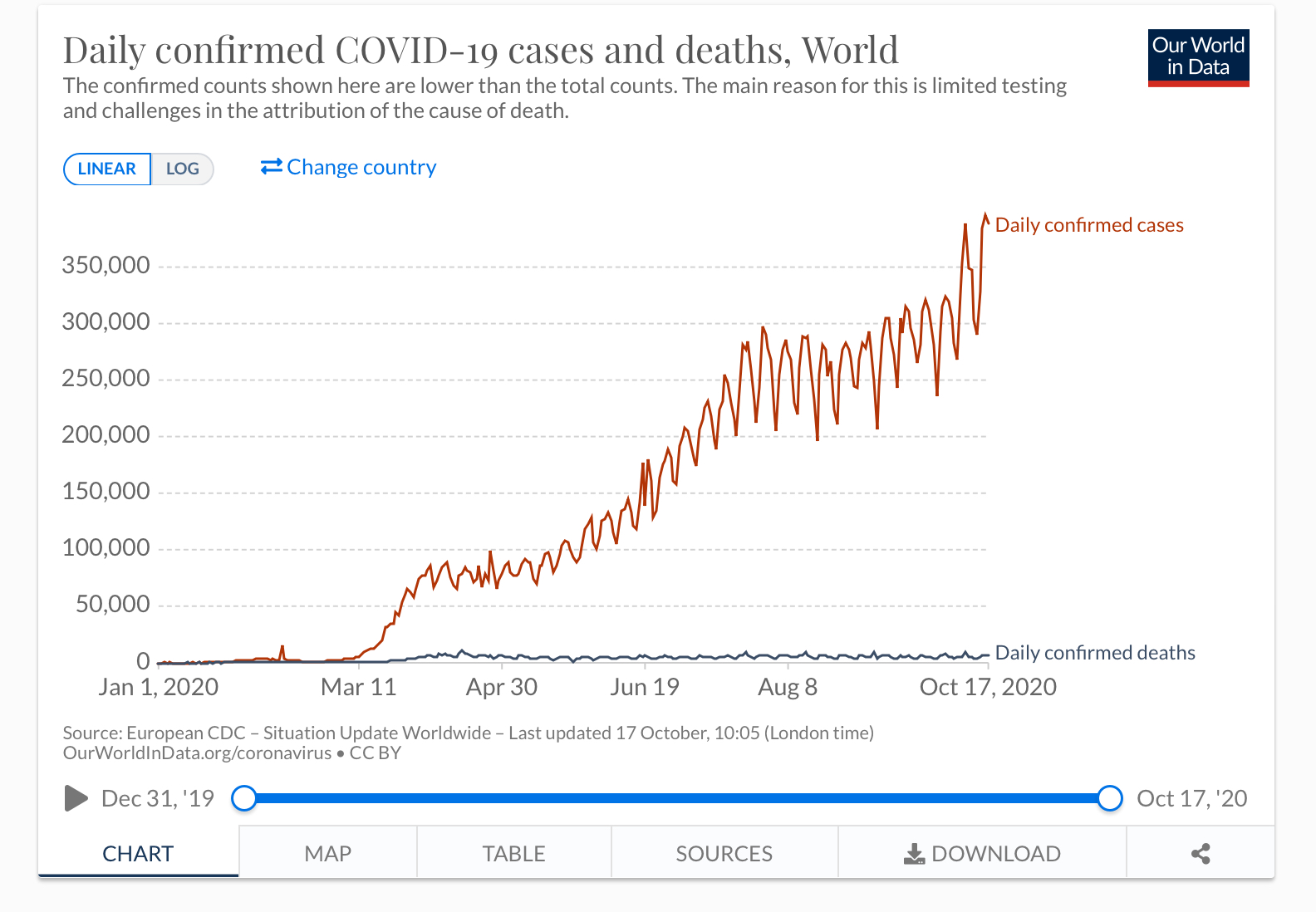 - put my glasses on to double check the little black line staying stable at the bottom of the graph is really daily deaths
-once more I think hmmmmmm
- draw a quick conclusion that while deaths have remained stable the new cases could be more testing is happening and it was never that deadly in the first place.
- wonder why this part of the story, re: cases Vs deaths, was not covered in the article.
- continue my life whilst not living in fear thus denying the media control over said life.
- post to CEO because I am still recovering from last nights dinner at Brooklyn Pizza & Bistro and their amazing cheesecake that could possibly prove to be the death of me in the near future as we are seriously considering making it our lunchtime coffee and(now) cheesecake option!

PS if anyone from Brooklyn Pizza and Bistro is reading you will see I am still getting over that incredible meal!
Top 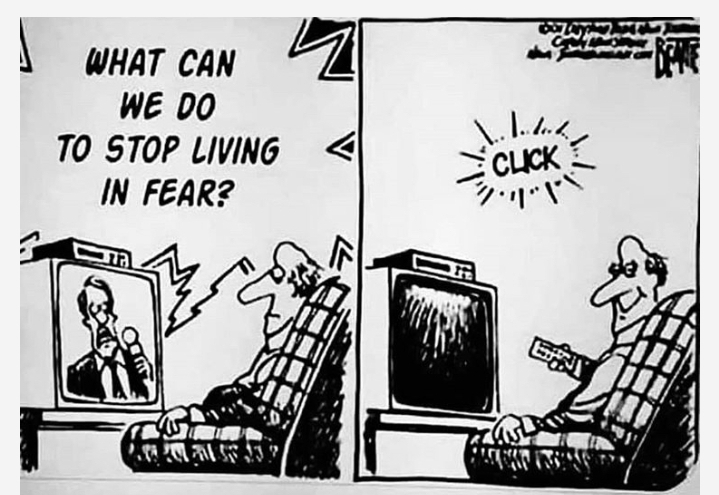 I'm standing up, so I must be straight.
Black night is falling, oh I hate to be alone.
What's a poor man do when the blues keep following him around.(Smoking Dynamite)
Top

One more vote for Sweden. 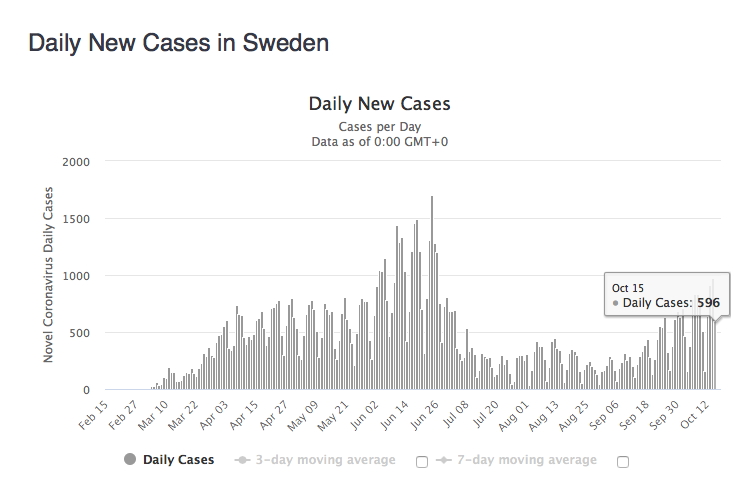 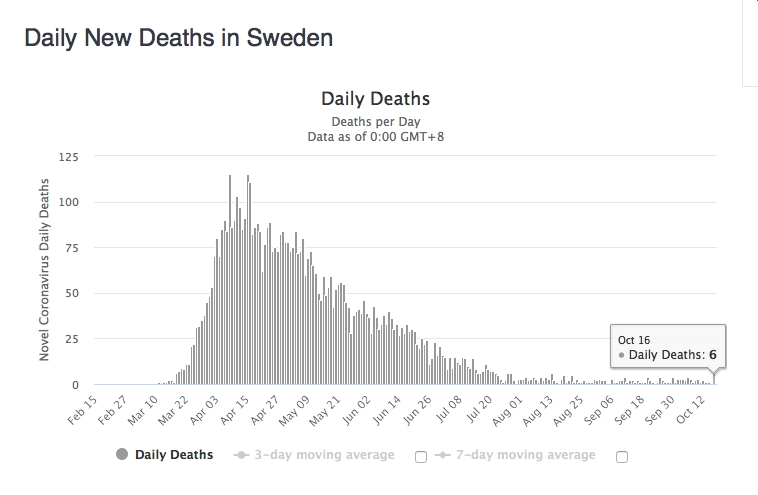 What is it about some members of CEO obsessing on the death rate?

This isn’t Ebola. One doesn’t get the virus and then die a few days later. They get very sick for a long time, and then slowly recover, many with lasting symptoms afterwards. That is what makes it so disastrous. It ties up the medical system, consuming all resources for a long time.

In first world countries, where all human life is considered valuable, it’s a big double whammy.

All resources are used up by the virus. Hospitals get clogged with virus patients. Others with acute and chronic medical conditions are unable to get care, get even more sick, so when they can be squeezed in, now require high levels of care as well.

PRC China didn’t really share everything it knew and still doesn’t. But the collective world now knows more about the virus, and how to manage it.

Personal protective gear now matches levels of need and consumption, so much so, that there is a now a concern over ‘medical waste’. Used masks thrown everywhere polluting the environment.

Blood, nasopharyngeal and now saliva tests are available, with rapid tests on the horizon.

The world is holding it’s collective breath for the vaccines. Meanwhile, it’s lockdown and massive unemployment for the world.

But things are getting better. The G20 just met and members have agreed to suspend loan repayments by debtor nations for the next 6 months. All except PRC China, who argues that their loans are made by ‘private’ banks and therefore not subject to ‘government’ agreements. (I think it’s all a part of the Socialist People’s program to own those countries infrastructures outright.). ‘Save the Children’ commercials have resumed on TV. But with so many Texans out of work and needing salvation themselves, it’s doubtful that there is extra to save. Texas just reopened requirements that in order to collect unemployment, recipients must prove they have applied for at least 3 jobs a week. Amazon, Wal-Mart, Dollar General, are all hiring.

Sorry for the long rant.

I’m putting my tin foil hat back on, now.
Top

US nears daily Covid cases record amid warning of 500,000 deaths by February
A study says coronavirus is on course to claim 511,000 by 28 February as cases surge in many states, particularly upper midwest
Sat 24 Oct 2020 00.54 BST
The United States on Friday was approaching a record for the number of new daily coronavirus cases, as a new study warned that the pandemic is set to cause half a million American deaths by February.

Covid-19 is on course to ravage states across the nation throughout the coming winter and more than 511,000 lives could be lost by 28 February next year, modeling led by scientists from the University of Washington found.

This means that with cases surging in many states, particularly the upper midwest, what appears to be a third major peak of coronavirus infections in the US could lead to nearly 300,000 people dying in just the next four months.

In the latest ominous sign about the disease’s grip, the US recorded 71,671 new cases of coronavirus on Thursday, the Associated Press reported, while the seven-day rolling average for cases surpassed 61,140, compared with 44,647 two weeks ago.

The record was reached on 22 July when the rolling average was 67,293 in the midst of a summer outbreak driven largely by surges of the virus in Florida, Texas, Arizona and California, the agency reported.

Meanwhile, the Washington Post reported that according to its own data tracker, the US hit an all-time daily high for new cases on Friday, with a total of more than 81,000.

Several states are setting records across the midwest and west for infections and hospitalizations, amid the autumn surge.
https://www.theguardian.com/world/2020/ ... -forecasts
Cambodia Expats Online: Bringing you breaking news from Cambodia before you read it anywhere else!

The US has set a world record for coronavirus cases in 24 hours, according to one count, with just over 100,000 new infections recorded.

The news comes three days before the presidential election, and as Donald Trump continues to stage large-scale events at which Covid mitigation measures such as mask-wearing and social distancing are not enforced. The president himself, the first lady, senior aides and Republican leaders contracted the virus after attending such events.

Trump, who spent time in hospital, has insisted the US is “rounding the corner” in the fight to contain the pandemic. This week his oldest son, Donald Trump Jr, a key campaign surrogate, said deaths from Covid-19 were “almost nothing”.

According to Johns Hopkins University – which counted nearly 99,000 US cases on Friday – nearly 230,000 of more than 9m US cases of Covid-19 have resulted in death.
https://www.theguardian.com/world/2020/ ... s-24-hours
Cambodia Expats Online: Bringing you breaking news from Cambodia before you read it anywhere else!