Yeah, that place out 'there'. Anything not really Cambodia related should go here.
Post Reply Previous topicNext topic
2788 posts

Fears of second wave in Germany as ‘R’ number jumps to 2.88 in two days

This looks bad. Time to leave Europe while you can...

Germany’s reproduction rate of Covid-19 has spiked from 1.06 to 2.88 in the span of two days following a string of localised outbreaks, prompting concerns over a second wave of the virus.

The Robert Koch Institute (RKI) said on Saturday the R number jumped to 1.79 on Saturday and 2.88 on Sunday, far higher than what is needed to contain the outbreak over a longer period of time.

An R number of 2.88 means that every 100 people who contract the virus would infect, on average, 288 more people. To contain the virus, a number lower than 1 is needed

As Germany tries to deal with it's exploding R rate, people are not too keen to go into another lockdown again. Is this the shape of things to come? Will people accept anymore lockdowns?

Police reinforcements have been sent to maintain a coronavirus quarantine on a tower block in the German city of Göttingen after violence on Saturday.

Seven-hundred people were placed in quarantine, but about 200 who attempted to get out clashed with police.
Residents attacked police with fireworks, bottles and metal bars, officials said.

The quarantine was introduced on Thursday after two residents tested positive. By Friday, 120 people were found to be infected. Most residents have been complying with the quarantine.

Eight police officers were injured in Saturday's violence and a suspect was detained, but released after questioning.

26th March (When the whole world had started lockdown) 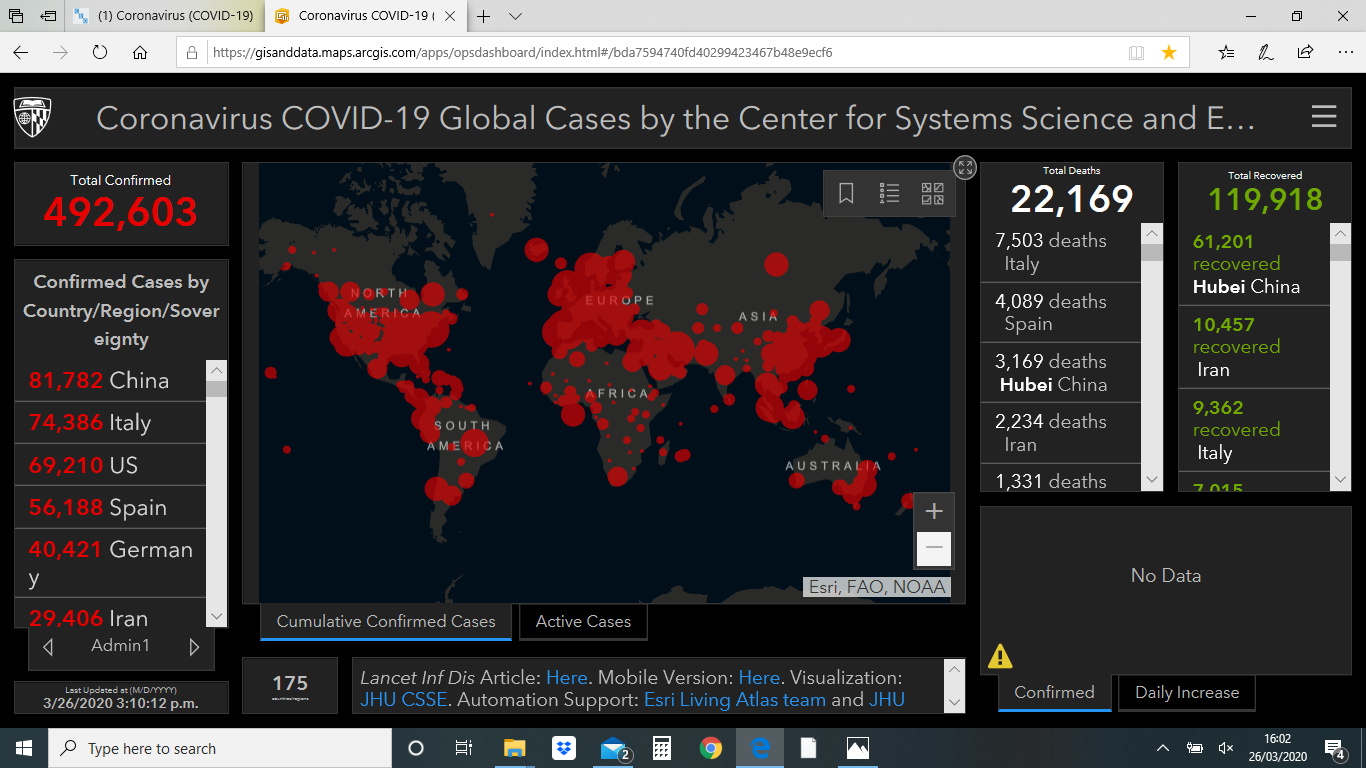 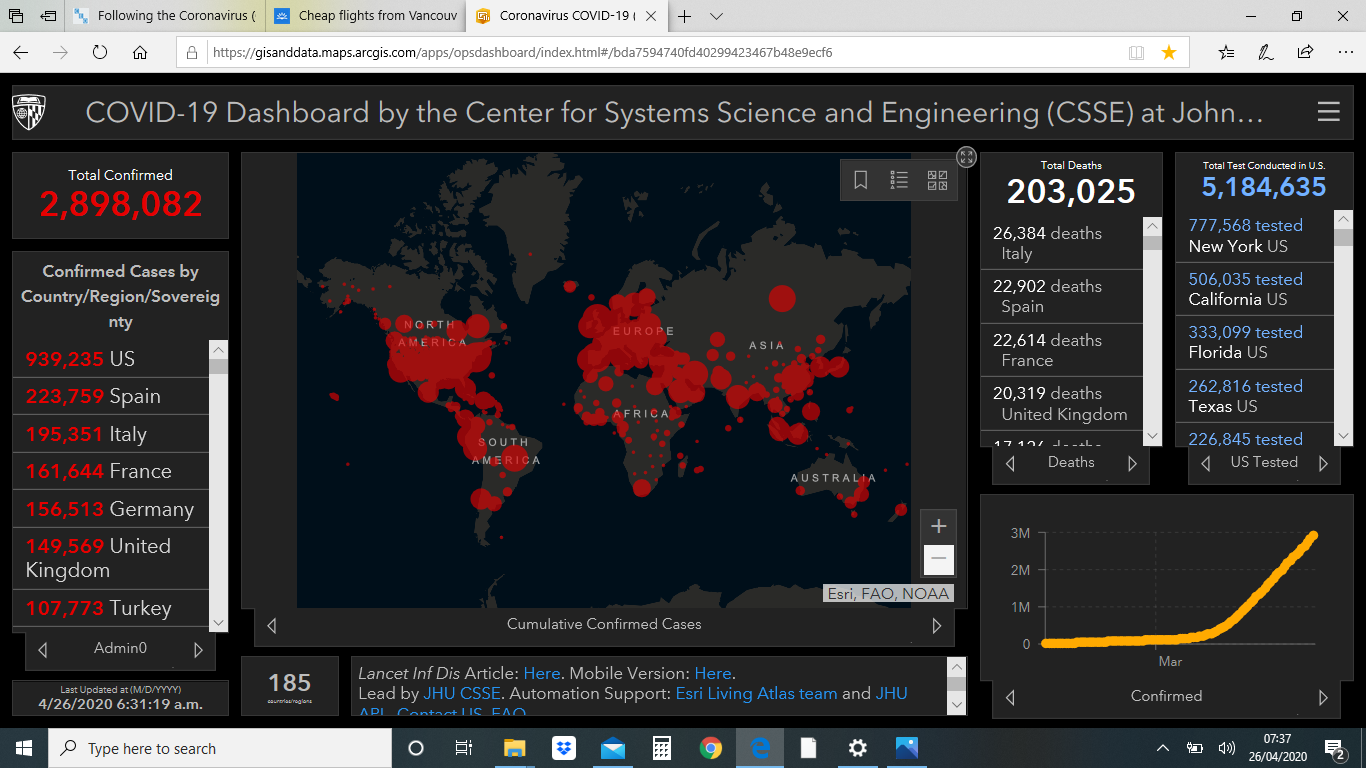 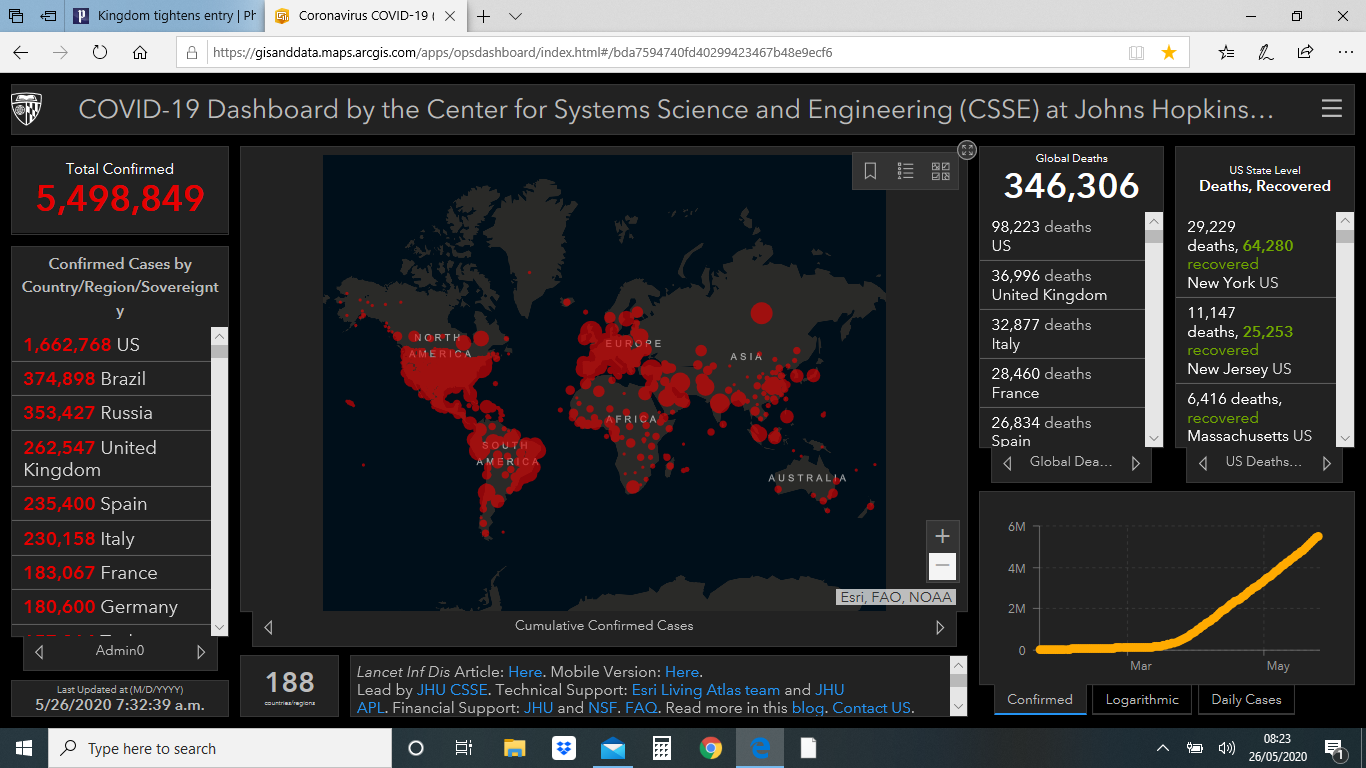 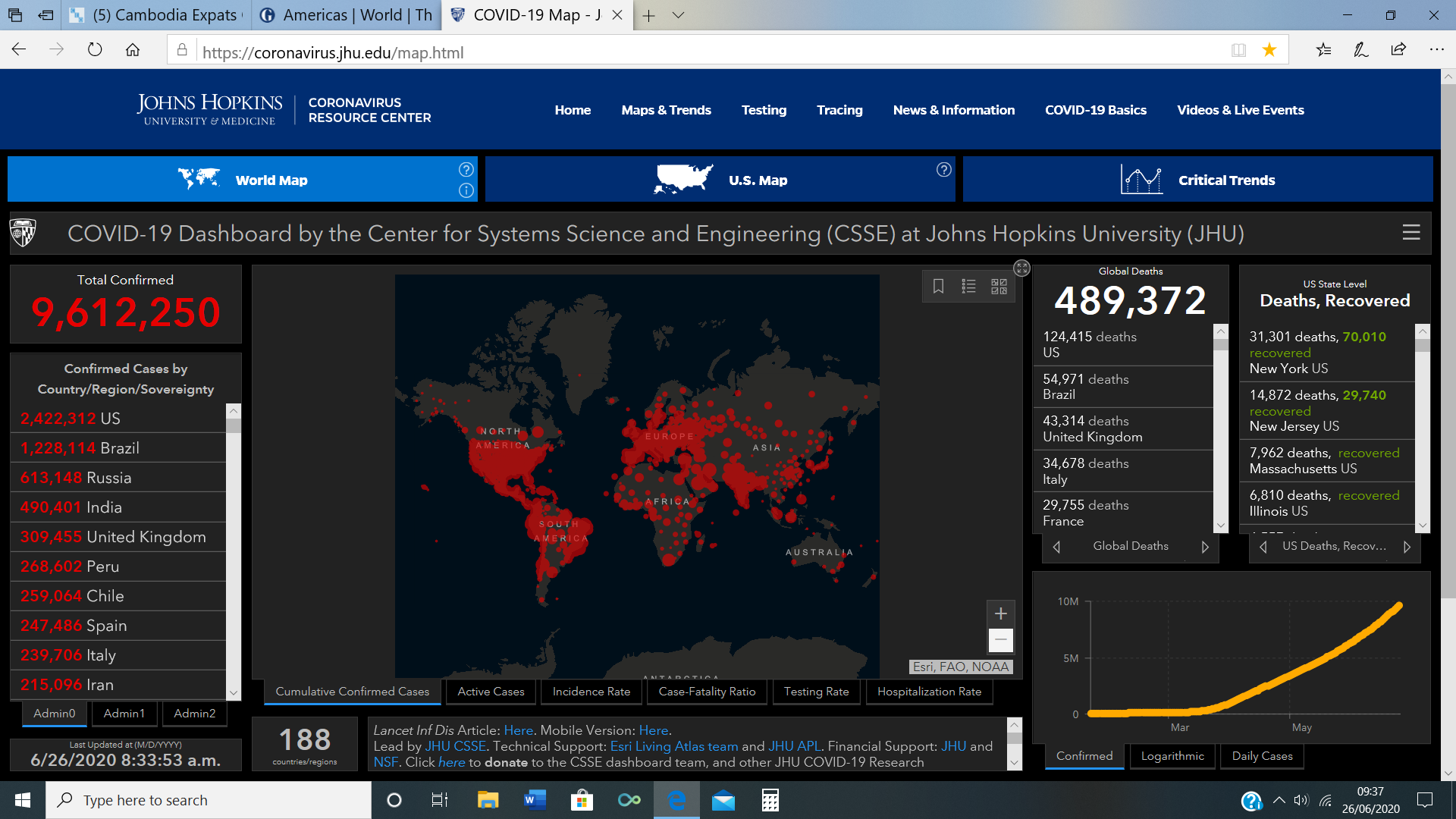 As from today Australia will start using a newly developed a saliva test for the virus in cases where children and elderly feel the swab test is too invasive for them. This is less risky for the medical staff as they don't need to wear protective gear, as samples for this test are done by the person placing saliva in a container , then placing it in sealed bag.
Cambodia,,,, Don't fall in love with her.
Like the spoilt child she is, she will not be happy till she destroys herself from within and breaks your heart.
Top

Duncan wrote: ↑Sun Jun 28, 2020 9:15 am As from today Australia will start using a newly developed a saliva test for the virus in cases where children and elderly feel the swab test is too invasive for them. This is less risky for the medical staff as they don't need to wear protective gear, as samples for this test are done by the person placing saliva in a container , then placing it in sealed bag.

Global report: deaths from coronavirus pass half a million
Ten million test positive in the space of six months; Melbourne records highest daily jump in locally acquired cases; some US states reimpose restrictions
Helen Sullivan and agencies
Mon 29 Jun 2020 07.18 BST
The coronavirus pandemic has killed half a million people in just over six months, with the toll passing the sombre milestone of 500,000 known deaths on Sunday night.

The World Health Organization (WHO) was first alerted by authorities in China about a string of pneumonia-like cases in Wuhan, a city of 11 million people, on 31 December 2019. Since then, 10 million people have tested positive for the virus, according to researchers at Johns Hopkins University, in at least 188 countries and territories worldwide, according to analysis by al-Jazeera.

The true death toll and number of cases is believed to be higher, due to differing testing rates and cause of death definitions, delays in reporting and suspected underreporting. But cases are rising by about a million a week, the WHO warned last week, with the rate of contagion doubling since 21 May, according to analysis by AFP.

The United States has by far the highest number of confirmed cases globally, with more than 2.5 million, and 125,803 deaths. Brazil, with the next highest confirmed cases and deaths has 1.3 million known infections and 57,622 deaths recorded.

The pandemic has caused mass unemployment in many countries, as lockdowns kept people in their homes and froze economic activity. Now, as many countries ease restrictions in the hope of restarting their economies, new outbreaks are emerging.

The hardest-hit parts of the US are in the south and west, where many state leaders had pushed for early economic reopenings.
https://www.theguardian.com/world/2020/ ... ass-500000
Cambodia Expats Online: Bringing you breaking news from Cambodia before you read it anywhere else!

At Least 107 Cases of Coronavirus Are Linked to One Bar in Michigan
As America attempts to reopen amid frightening infection numbers, bars like Harper's are showing why that might not be a good idea.
by Jelisa Castrodale
June 30, 2020, 6:00pm

Earlier this month, Michigan Governor Gretchen Whitmer issued an executive order, giving bars and restaurants the OK to reopen for limited dine-in service for the first time since March 16. Any restaurant that decided to resume service on June 8 faced a now-familiar list of restrictions, including pushing all of the tables at least six feet away from each other, and ensuring that they never exceeded 50 percent of their total capacity.

When the (Lansing) City Pulse checked out what was happening in the city on that first evening, it noted that some restaurants were mostly quiet, with a handful of occupied indoor tables. "Then there was neighboring Harper's," it wrote. "By 8:30, a long line had formed on the sidewalk. The patios were jammed. If tables were six feet apart outside, customers certainly were not."

In an accompanying photo, one can see black and yellow "Please Stay Six Feet Apart" stickers on the concrete steps into the restaurant, but other than one woman in platform espadrilles, no one else seems to care. Clusters of men in untucked polos and flip-flops and women in shorts and tank tops are clumped together at the back of the line. No one is wearing a mask.

"People are told if you’re not from the same household, you have to stay six feet apart," Ingham County Health Officer Linda Vail said at the time. "We have to have people basically respect that. If they don’t, there's not a lot we can do about that."

And then in the least-surprising plot twist ever, last Tuesday, Ingham County officials announced that at least 18 people who had visited Harper's between June 12 and June 20 had tested positive for coronavirus. All of those individuals were between the ages of 19 and 23, and "about half" of them reportedly had a connection to Michigan State University.

In less than one day, the number of positive cases connected to Harper's increased to 43. By Thursday night, it was 51. Then it was 63. And over the weekend, that number jumped to 85 positive cases that were linked to the bar, including 80 patrons and five "secondary infections" among others who had close contact with them. The Ingham County Health Department has since asked anyone who was at Harper's between June 12-20 to self-quarantine for 14 days.

And it gets worse: according to the Detroit Free-Press, "multiple families" in swanky Grosse Pointe Park—almost 100 miles from Lansing—are now in quarantine because at least one Harper's attendee went to a "huge house party" in the neighborhood, exposing dozens of other teens and twentysomethings to the virus. Still others were exposed at a large bonfire that some of the same crowd attended that same weekend.
https://www.vice.com/en_us/article/k7q7 ... n-michigan
Cambodia Expats Online: Bringing you breaking news from Cambodia before you read it anywhere else!

1) the long termimact on spending and manufacturing which wiltake nother 6 months to arrive
2) covid 2 which will undoubtedly turn up this winter, same as flu mutates every year. The second wave will come!

Not really looking to argue PC

a/ It is simply not true that we had a different strain.

Yes, on 1/ - however we also put in excellent economic support measures which will ameliorate the worst effects.
- combined with the short lockdown that we could afford because the anti-virus measures were so successful.

2/ Yes we will have local outbreaks, for sure.
but consensus says because we have bought valuable time, because we are coming off such a low base, because our tracking and testing protocols are so good - we can afford to swing back to nearly normal now, and be able to jump on those inevitable outbreaks quick smart.
That's the theory. But i fully acknowledge that only time will tell.

Not wishing to argue but - google it https://www.news.com.au/world/coronavir ... aa1df80517.
Not wihing to argue but we have now reached a higher level than any european country. Admittedly only 150 or so are dying a day in the UK now. Lecester is shut down,about 5 other towns likely to be and pubs open this weekend. Im short the bumbling clown and his brainless cabinet have messed up. No tracing cos they cannot find them, our world beating app abandoned, his dad jetting off to greece to fix up his villa fro renting and admitting he will not follow covid rules, Dominic Cummings facing private prosecution for failing to follow covid rules, 500,000 idiots spreading covid on south coats beaches, a few hundrred welsh teenagers gathering for a punch up on a welsh beach and thousand of Liverpool fans partying along with half a dzen illegal raves in London. The british are so world class at fucking up
Top

Ok, ^^^ new/first evidence of identified variations.
But as far as i can see there is no evidence, or claims even, that Australia is experiencing a less virilent strain.
Never heard that anywhere, but please tell me if i am wrong.

Not saying that this may not be discovered as the virus is further understood - but i have not heard one peep from a medical person that Australia is experience lower death rates amongst those who are infected.
???
Top
Post Reply Previous topicNext topic
2788 posts