Yeah, that place out 'there'. Anything not really Cambodia related should go here.
Post Reply Previous topicNext topic
2733 posts

Hi, I have been living in Beijing for the past three years and last night arrived with my pregnant wife and our two kids.

I feel like I have pretty good insight into what is actually happening in China, having seen the insane escalation in not only the numbers but the massive change in public attitude.

There is so much to say about it, I am not really sure where to start but I can list a few observations and if anyone has any questions feel free and I'll respond as best I can. I have also been talking to my Chinese colleagues and people from Hubei province.

1. EVERY SINGLE person in Beijing is wearing a mask no matter where they go.
2. There was the least amount of traffic I've ever seen on the way to the airport (greatly different from previous (CNY) and they have cancelled all the freeway tolls.
3. Whether you believe Beijing actually has the reported "70 cases" or the much more realistic 700 cases, you need to remember at least half of Beijing's 24 million population is travelling due to the holiday, so whichever number you accept, understand that it is only representing half of the Beijing's real population.
4. Medical workers are being infected on a large scale, from the nurses to the head of major departments at top hospitals. (One of the top doctors in Beijing contracted the disease early on when he travelled to Wuhan to observe a patient and did not wear medical goggles...) However, they are not able to voice their concerns being that it is China and they all work for the government, which not only strictly monitors what they are saying on social media but forces them to say certain things.
5. There are several temperature checks/quarantine areas inside the Beijing airport. We saw several people getting turned away, or in some cases hauled away. They are asking people to sign documents related to their previous travel history and checking that against the records on your passport/ID.
6. There were NONE, ZERO temperature checks arriving at PNH. Nothing related to health. My wife who is a medical worker from Cambodia even asked the immigration guy if there were any infrared cameras or anything and his response was "of course there are, you just cannot see them". There are none in PP, however, they do seem to be in SHV and SR.


From the day we heard about the spreading we were extremely cautious, we holed up in our apartment and had virtually no contact outside of receiving grocery deliveries. We decided to come to Cambodia once we realized the government is not going to prevent people from coming back to Beijing, we knew we had to get out. We do understand the potential risk of us travelling to Cambodia but at this point, we do not even know when we will go back to China and we have decided to stay in a hotel instead of family's home and are constantly monitoring our temperatures and our symptoms and rarely going out, we will be doing so for the next ten days, at least.

Sorry if this sounds like insane rambling but it has been a crazy fucking week. There is so much more information I can share but as i said, it is hard to know where to start.

We have never been so happy as when exited immigration at the airport early this morning.
Top 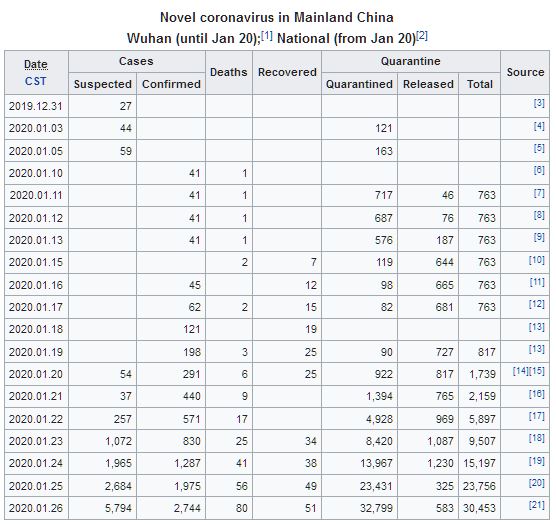 
No, that's not true. look yourself.

Compare the figures with the Chinese official screenshot and it tallies.

This IS the source.

The table collates the reports daily.

The table headings in English are translations of the Chinese descriptors.

Here is a translation to make it easier (I think) 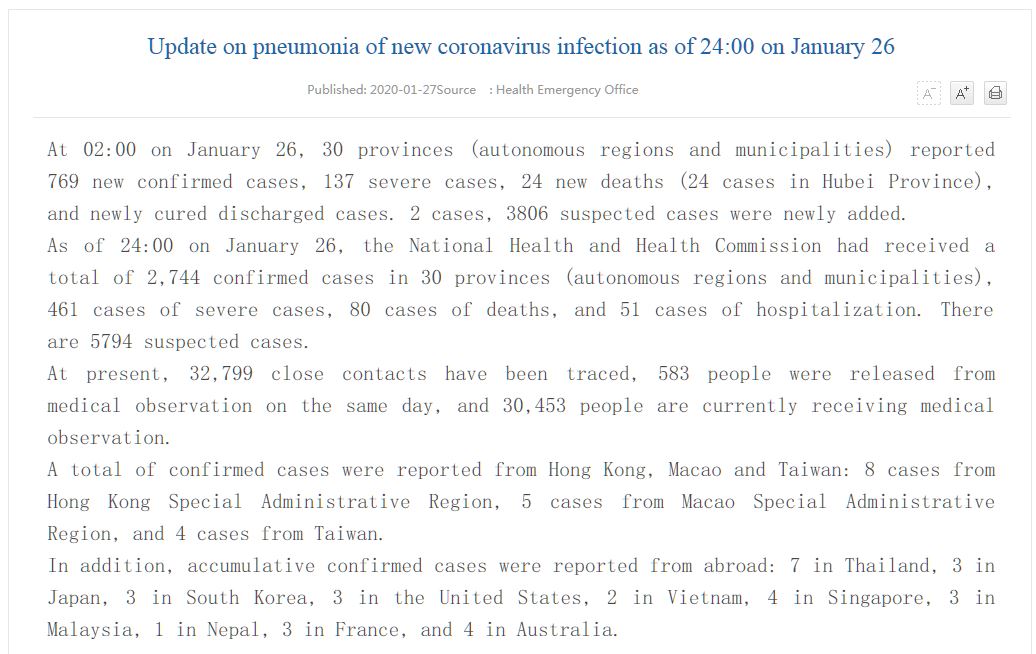 A graphical Illustration is useful to show the exponential increase in cases. 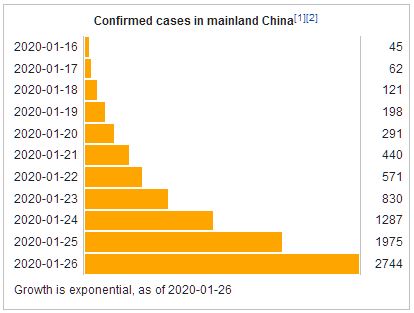 I have a group of 4 flying, a couple of us have been sick and one had a fever. We will go PP to Japan and onward to USA.

Considering we avoid China I suppose there is little concern of disruption for us, but I wonder if they will make us go through a bunch of scrutiny on health screenings.
Top

Considering we avoid China I suppose there is little concern of disruption for us, but I wonder if they will make us go through a bunch of scrutiny on health screenings.

I hope you and your family get well soon and have a safe journey.


No, that's not true. look yourself.

Compare the figures with the Chinese official screenshot and it tallies.

This IS the source.

The table collates the reports daily.


No, the table doesn't collate daily reports. Look at the column 'quarantine'.

The table is a mess without a reading instruction.

And even with an instruction it contains (calculation?) errors.
Top

What a great time to come in to Cambodia for the first time. Do you guys have any tips concerning this case, I already packed some facemasks with me. Just got to hope for the best.
Top

The earliest case became ill on 1 December and had no reported link to the seafood market, the authors report. “No epidemiological link was found between the first patient and later cases,” they state. Their data also show that in total, 13 of the 41 cases had no link to the marketplace either. “That’s a big number, 13, with no link,” says Daniel Lucey, an infectious disease specialist at the University of Georgetown

The Lancet paper’s data also raises questions about the accuracy of the initial information China provided, says Lucey. At the beginning of the outbreak, the main official source of public information was notices from the Wuhan Municipal Health Commission. Its notices on 11 January started to refer to the 41 patients as the only confirmed cases and the count remained the same until 18 January. The notices did not state that the seafood market was the source, but repeatedly noted that there was no evidence of human-to-human transmission and that most cases linked to the market. Because the Wuhan Municipal Health Commission noted that diagnostic tests had confirmed these 41 cases by January 10 and officials presumably knew the case histories of each patient, “China must have realized the epidemic did not originate in that Wuhan Huanan seafood market,” Lucey tells ScienceInsider.

fullhttps://www.sciencemag.org/news/2020/01/wuhan-s ... g-globally
The idea that seeing the world is going from place to place to look at obvious things is an illusion natural to dull minds.
Top

edusseus wrote: ↑Mon Jan 27, 2020 12:10 pm What a great time to come in to Cambodia for the first time. Do you guys have any tips concerning this case, I already packed some facemasks with me. Just got to hope for the best.

PS...Only joking...You probably have more chance of being killed by a run away truck with no brakes, all good here at the moment

SA KAEO: All Chinese nationals entering Thailand from Cambodia via the immigration checkpoint at Ban Khlong Luek in Aranyaprathet district are being given thermal health scans for signs of coronavirus infection.

A screening point has been set up at the arrivals room of the immigration building. The process is supervised by Pol Col Arthit Yakaew, the Sa Kaew immigration police chief, and Thanakrit Saisin, chief of the international disease control unit at the Aranyaprather border checkpoint.

At the screening point, all Chinese nationals entering from Cambodia's Poi Pet were being checked with a thermoscanner. Anyone found with a body temperature above 38°C would be singled out for examination, Mr Thanakrit said.

If suspected of being infected by the new coronavirus, they would be sent to Aranyaprathet Hospital and quarantined for observation.

About 500 Chinese tourists in tour groups passed the Aranyaprathet border checkpoint on Monday morning. They were all screened and none were found to have a fever. All were allowed to enter Thailand.
https://www.bangkokpost.com/thailand/ge ... s#cxrecs_s


The Chinese government warned today (Jan. 26) the new coronavirus spreading through the country appears to be contagious as much as two weeks before symptoms appear. In a press briefing, the head of China’s National Health Commission, Ma Xiaowei, said scientists’ understanding of the virus was still “limited” and the outbreak was likely to continue for “some time,” according to the South China Morning Post.

Most of the patients originally diagnosed with the virus were exposed at the Huanan seafood market in Wuhan, which also trades in wild animals believed to be the source of the infection. Genetic analysis suggests the new coronavirus originated in fruit bats, according to China’s Centre for Disease Control and Prevention. That gives it a common ancestor with the SARS (severe acute respiratory syndrome) virus. The SARS outbreak in 2002-03 infected thousands and killed more than 740 people around the world. While people infected with SARs generally developed symptoms within a week of infection, Ma warned that people with the new coronavirus could be contagious for as many as 14 days before showing signs of infection.
https://qz.com/1791405/china-says-wuhan ... ncubation/

If it is contagious for 14 days before symptoms appear, thermal monitoring isn't going to tell you who is contagious, just who is already sick.
Top

edusseus wrote: ↑Mon Jan 27, 2020 12:10 pm What a great time to come in to Cambodia for the first time. Do you guys have any tips concerning this case, I already packed some facemasks with me. Just got to hope for the best.

PS...Only joking...You probably have more chance of being killed by a run away truck with no brakes, all good here at the moment

Lol, let's hope that that won't happen either

I'll arrive tomorrow and will be there for like a month. There's plenty of time for thing to escalate, if the growing of cases is like the charts. In reality, I can't imagine that China is telling the truth about the case.
Top
Post Reply Previous topicNext topic
2733 posts