Yeah, that place out 'there'. Anything not really Cambodia related should go here.
Post Reply Previous topicNext topic
3316 posts

Friday morning marked 29 days straight that Vietnam has gone without any cases caused by community transmission.

Russia is the third worst infected country, after the U.S. and Spain, with more than 252,000 Covid-19 cases and 2,305 deaths. But Vietnam health authorities have confirmed there is no likelihood of community transmission from the latest patients.

The 24, one woman and 23 men, aged between 24 and 47, had returned to Vietnam on Vietnam Airlines flight VN0062 from Russia to the northern province of Quang Ninh on Wednesday under a government program to repatriate Vietnamese residents living and working abroad.

They had been quarantined on arrival at centralized facilities in the provinces of Quang Ninh, Thai Binh and Hai Duong. Twenty-three of the latest patients are now treated at the Thai Binh General Hospital and the other at Hospital No.2 in Quang Ninh Province.

The latest update has brought the number of active patients in Vietnam to 52, while 260 other patients have recovered, including eight confirmed Thursday.

Vietnam now has more than 12,000 people placed in quarantine, 353 at hospitals, more than 8,000 in centralized facilities and the rest at home. These are people coming from abroad or those who’ve had close contact with Covid-19 patients.
https://e.vnexpress.net/news/news/24-re ... 99558.html

Latest:
Four new cases confirmed, bringing country’s total to 324
Update: May, 18/2020 - 18:54
HÀ NỘI — Two cabin crew from Vietnam Airlines are among the latest patients to test positive for COVID-19, according to the Ministry of Health (MoH).

The pair were working onboard flight VN0062 from Moscow in Russia, bringing home Vietnamese citizens on May 13.

The two other new cases were passengers on flight VN001 from Washington DC in the US to Việt Nam on May 16.

All four new cases were quarantined right after entering the country.
Cambodia Expats Online: Bringing you breaking news from Cambodia before you read it anywhere else!

What did eight weeks and $3 trillion buy the U.S. in the fight against coronavirus?

WASHINGTON (Reuters) - Unemployment checks are flowing, $490 billion has been shipped to small businesses, and the U.S. Federal Reserve has put about $2.5 trillion and counting behind domestic and global markets.

Fears of overwhelmed hospitals and millions of U.S. deaths from the new coronavirus have diminished, if not disappeared.

Yet two months into the United States’ fight against the most severe pandemic to arise in the age of globalization, neither the health nor the economic war has been won. Many analysts fear the country has at best fought back worst-case outcomes.

For every community where case loads are declining, other hotspots arise and fester; for states like Wisconsin where bars are open and crowded, there are others such as Maryland that remain under strict limits.

There is no universal, uniform testing plan to reveal what is happening to public health in any of those communities.

It's funny that Reuters choses to talk about Sweden when they have a sliver of bad news in the form of a narrow window of data. At least they did mention that Sweden's open approach has beaten most of Europe's outcomes, hands down. The last line of the article could not of been brushed over more if they tried.

Sweden's economy will be far less damaged and a return to normal life will be far easier because their didn't have a lockdown. Their Nordic neighbours have still to coax their people out and get them back to work in any meaningful way, a problem shared with the rest of Europe.

They talk about a second wave of the virus, but there is going to be a second wave of economic damage with populations so successfully terrified into a lockdown, many are a very reluctant to emerge. With governments still picking up the bills, many will stay put until economic reality forces them outside. It might be too late by then with not only their job gone, but their employer too.

STOCKHOLM (Reuters) - Sweden, which has opted for a more open strategy in combating the virus than other European countries, has the highest number of deaths in Europe per capita from the COVID-19 disease over the last seven days, data showed.

Sweden has kept most schools, restaurant and businesses open during the pandemic. While deaths are on the decline Sweden had 6.25 deaths per million inhabitants per day in a rolling seven day average between May 12 and May 19, according to Ourworldinsata.org. That was the highest in Europe and just above the United Kingdom, which had 5.75 deaths per million.

Over the course of the pandemic Sweden still has fewer deaths per capita than the United Kingdom, Spain, Italy, Belgium and France, which have all opted for lockdowns, but much higher than Nordic neighbours Denmark, Norway and Finland.

Sweden’s open strategy seems to have softened the blow on the economy, with growth shrinking much less than in Denmark and Norway in the first quarter.

Great chart here to click on, country by country, to see the current state of lockdown as restrictions begin to ease.

National and local authorities around the world are beginning to wind down restrictions imposed to slow the spread of the new coronavirus, gradually lifting the lockdowns that have stunted economies, decimated jobs and thrown millions into poverty.

The following chart shows the status of social distancing measures in five important areas: schools, shops, bars and restaurants, public transport and international travel. Exceptions to the general rule are noted where significant.

The chart focuses on the countries and U.S. states with the highest number of infections, as well other territories whose economies are regionally important.

The chart will be updated as more governments announce measures to reopen their economies, or if they go too far and have to pull back. 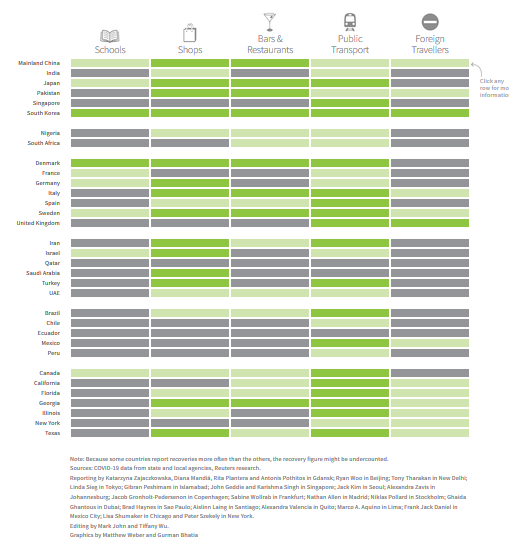 https://graphics.reuters.com/HEALTH-COR ... index.html
Cambodia Expats Online: Bringing you breaking news from Cambodia before you read it anywhere else!


William Haseltine, a groundbreaking researcher of cancer, HIV/AIDS and human genome projects, said the better approach now is to manage the disease through careful tracing of infections and strict isolation measures whenever it starts spreading.

While a COVID-19 vaccine could be developed, he said, “I wouldn’t count on it.”

For treatment, patients have been getting antibody-rich plasma donated by people who recovered from COVID-19, and drugmakers are at work producing refined and concentrated versions of that serum.

Known as hyperimmune globulin, those products are “where the first real treatments are going to be,” he said, predicting success also with research into monoclonal antibodies that home in on and neutralize the ability of the virus to enter human cells.

Doc67 wrote: ↑Wed May 20, 2020 4:44 pm Sweden tops Europe COVID-19 deaths per capita over last seven days
STOCKHOLM (Reuters) - Sweden, which has opted for a more open strategy in combating the virus than other European countries, has the highest number of deaths in Europe per capita from the COVID-19 disease over the last seven days, data showed.

Over the course of the pandemic Sweden still has fewer deaths per capita than the United Kingdom, Spain, Italy, Belgium and France, which have all opted for lockdowns, but much higher than Nordic neighbours Denmark, Norway and Finland.

CEOCambodiaNews wrote: ↑Wed May 20, 2020 8:03 pm Great chart here to click on, country by country, to see the current state of lockdown as restrictions begin to ease.

Huge variation in percentage of deaths from known cases. Noticeably "better results" in Asia compared to the west. I didn't even see this evidence until I ranked the numbers from highest to lowest. Doubt you can draw any conclusions from this because there are so many variables in each country.

Note ^^^ that Sweden's death rate is not that much behind Europe's worst, but their current rate (previous 7 days) is the highest.
So, a good chance Sweden's approach will put them at the very top of the death rate table.
Top

not sure about others but for me;
I would not feel safer with the staff dressed like this
yet i have no idea where the passengers have been recently or who they had been in close contact with 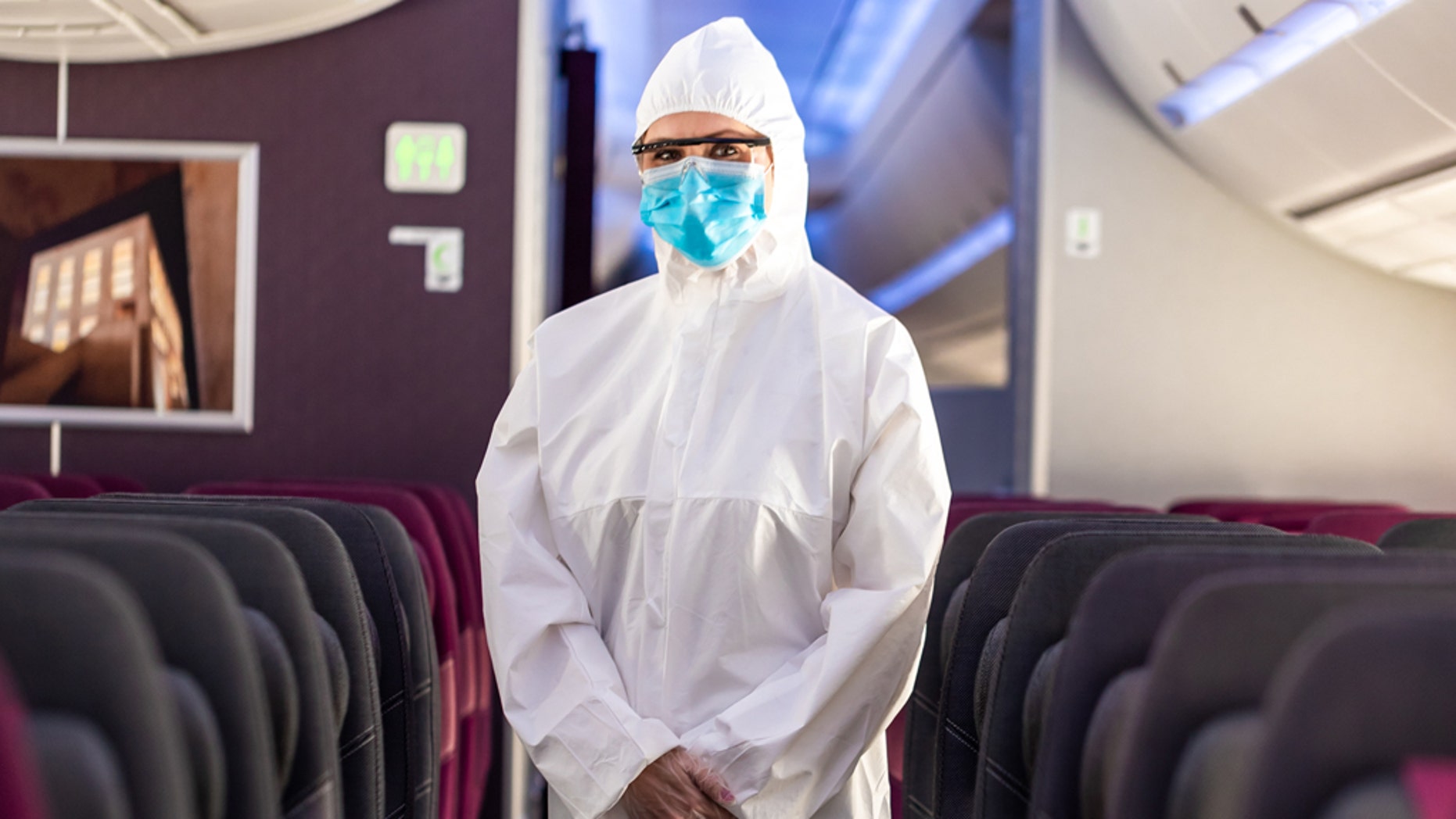 So got to wear a mask for 12+ hours, no food or drinks?
what about if i need use the toilet? will it be sanitized after every use>

Nope,
I'm not flying anywhere soon.
In a nation run by swine, all pigs are upward-mobile and the rest of us are fucked until we can put our acts together: not necessarily to win, but mainly to keep from losing completely. HST
Top