Oh good. I had no idea how you felt about it. I wish you would share this opinion more often, and in more threads...

The simple Fact is that covid is much more contagious than the common flu and is killing more people, With extreme measures in place to prevent it's spread. If we took these measures away, the death toll would be much higher. If we took these measures with the flu, the death toll would probably barely register on the charts. The numbers are there. There's no denying them.
Do you think the parents of baby boomers whined so much when the boomers started changing society? And yet the whiney ones like to call young people "snowflakes." Hmm...
Top

Electric Earth wrote: ↑Mon May 11, 2020 12:38 pm The simple Fact is that covid is much more contagious than the common flu

Lol, another logic challenged genius. I thought this point had been covered many times but obviously someone missed the class.

Pray, tell me why only 4 million infections of coronavirus after many months globally when common flu usually registers hundreds of millions of infections over the same period. If much more contagious.
After you have solved this riddle we can move on to the next puzzle.
Top

Germany has a hope.

What?
Germany will have a hope if it stops doing what worked?
Top

Nothing. Please don’t get distracted from drinking your Kool-Aid.
Top

'Now it starts again': new coronavirus outbreaks spark unease in China
Cases rise in Shulan, near the Russian border, and in Wuhan, where stringent lockdown measures had been eased in recent weeks
Published on Mon 11 May 2020 04.44 BST
An untraced coronavirus outbreak in a Chinese city near the Russian border and a spate of new cases in Wuhan has prompted fears of a fresh wave of infections in China.

On Sunday, Chinese authorities reclassified Shulan, a city near the Russian and North Korean borders, as high risk, after a cluster of cases connected to a woman with no known history of travel or exposure to the virus.

It came just a week after China designated all regions in the country as low or medium risk. On Sunday the country’s national health commission reported 17 new cases, its second day of a double-digit rise and its highest number in nearly two weeks.

Five locally transmitted cases were in three provinces which border Russia or North Korea – three in Jilin, and one each in Heilongjiang and Liaoning.

All of Jilin’s new cases were in Shulan city, including a 28-year-old woman, a 45-year-old man and a 56-year-old man, bringing the city’s total to 12.

Chinese state media, CGTN, said authorities have ordered the temporary closure of all public places in Shulan, including sports facilities, cinemas and libraries, and for all residents to stay home except under “unusual circumstances”. Students in their final year of middle or senior high school will return to online learning, it said. No taxis can leave the city, and all public transport has been suspended.

Local media said the source of Shulan’s chain of infection remained a mystery. Jilin provincial health commission said it originated with a 45-year-old woman who has no residential or travel history outside the province, and no known contact history with people returning from overseas or key provinces.

In recent weeks China has enacted border closures and social restrictions on areas bordering Russia, including Suifenhe, in the east of Heilongjiang province, after some people returning to China via land borders were diagnosed with Covid-19.
Full article: https://www.theguardian.com/world/2020/ ... e-in-china
Cambodia Expats Online: Bringing you breaking news from Cambodia before you read it anywhere else!

Nothing. Please don’t get distracted from drinking your Kool-Aid.

Apart from that - any answer to the question, H-8?
Top 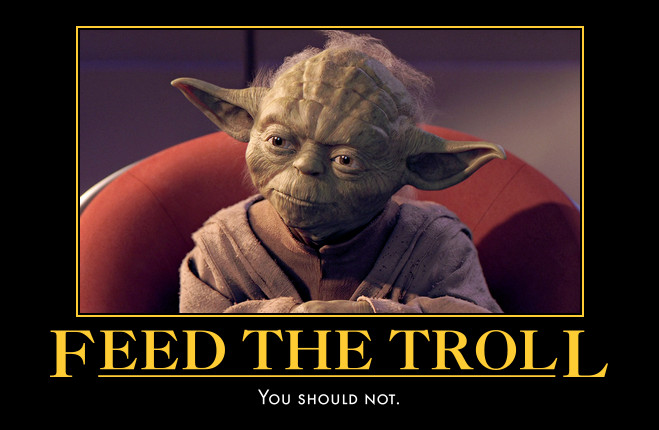 Nothing. Please don’t get distracted from drinking your Kool-Aid.

Apart from that - any answer to the question, H-8?

interesting as ONLY 7 cases reported
A 76 ear old american that had traveled thru India was the 1st on march 6th and his partner tested positive a few days later. Both recovered.
the remaining 5 were all Bhutanese that had been overseas;
no cases since April 22nd

So concerned was the goverment that as of May 7th

Bhutan is currently closed to tourism
In a nation run by swine, all pigs are upward-mobile and the rest of us are fucked until we can put our acts together: not necessarily to win, but mainly to keep from losing completely. HST
Top

Coronavirus pandemic: Tracking the global outbreak
BBC News
10 May 2020
Coronavirus is continuing its spread across the world, with more than four million confirmed cases in 187 countries. More than 279,000 people have lost their lives. 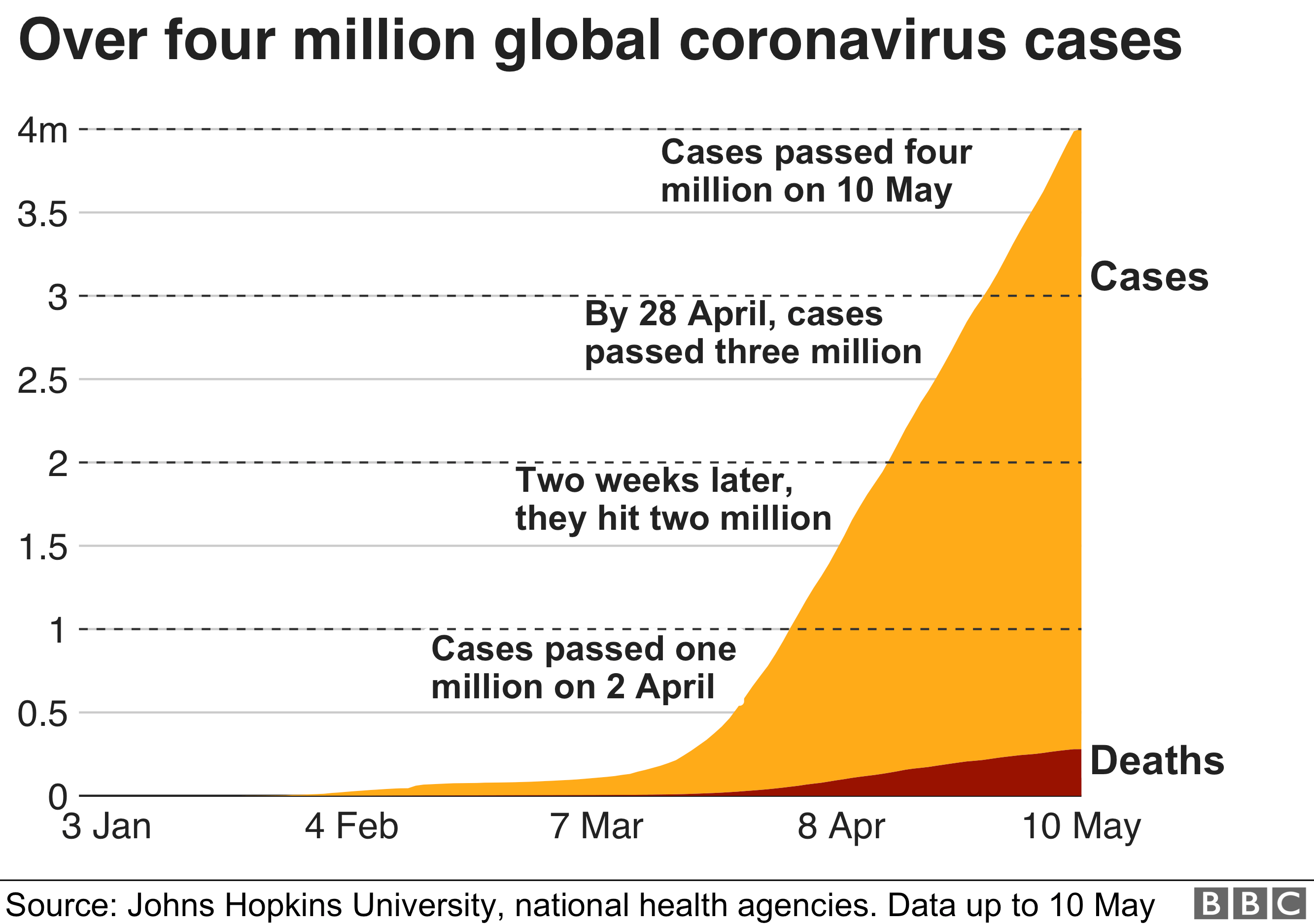 The United States alone has more than 1.3 million confirmed cases - almost six times as many as any other country.
The US has by far the largest number of cases, according to figures collated by Johns Hopkins University. With more than 78,000 fatalities, it also has the world's highest death toll.

France, Italy, Spain and the UK - the worst-hit European countries - have all recorded more than 25,000 deaths.

In China, the official death toll is some 4,600 from about 84,000 confirmed cases, although critics have questioned whether the country's official numbers can be trusted.
Since then it has been spreading rapidly in many countries and the number of deaths continues to climb. 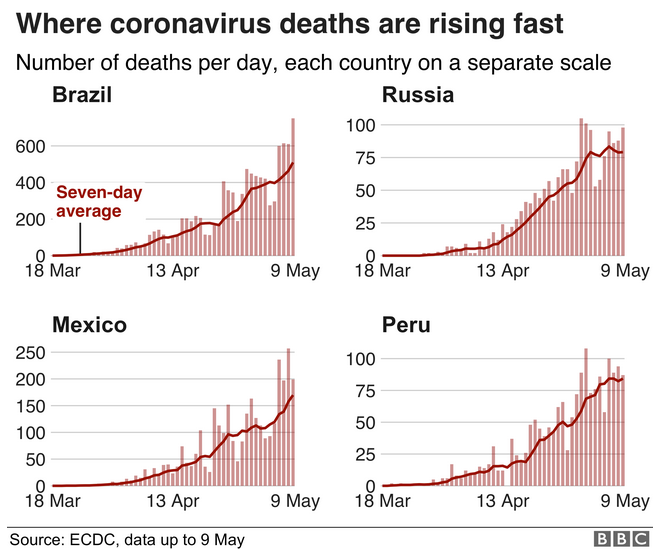 https://www.bbc.com/news/world-51235105 ... ting-story
Cambodia Expats Online: Bringing you breaking news from Cambodia before you read it anywhere else!

MOSCOW (Reuters) - A new surge in coronavirus cases took Russia’s tally past those in Italy and Britain on Monday, making it the third highest in the world just hours before President Vladimir Putin was due to issue an update on the situation.
FILE PHOTO: A man visits a makeshift memorial for medics, who reportedly died in Saint Petersburg and Leningrad Region in the times of the coronavirus disease (COVID-19) outbreak, in central Saint Petersburg, Russia May 9, 2020. REUTERS/Anton Vaganov

The number of new cases of the novel coronavirus rose by a record daily amount to 11,656 in the previous 24 hours, making the official tally 221,344. Only Spain and the United States have recorded more cases than the world’s biggest country.

More than half of all cases and deaths are in Moscow, the epicentre of Russia’s outbreak. The Russian capital on Monday reported an overnight increase of 6,169 new cases, bringing its official total to 115,909.

Official data published on Sunday showed Moscow reported 18% more deaths in April this year than the same month in 2019, raising the possibility that the official death toll from COVID-19, the respiratory disease caused by the virus, seriously understates the spread of the virus.
https://www.reuters.com/article/us-heal ... SKBN22N13B
Cambodia Expats Online: Bringing you breaking news from Cambodia before you read it anywhere else!