Yeah, that place out 'there'. Anything not really Cambodia related should go here.
Post Reply Previous topicNext topic
2980 posts

SternAAlbifrons wrote: ↑Sun Mar 08, 2020 8:23 pm Conspiracy theories can dangerously misleading in times like this.
But admittedly, i am a "gimmie the evidence" wannabe scientist kinda guy about everything.

And often, conspiracy theories are re-stated and re-circulated as facts and news, intentionally or unintentionally, and that can latch on to some unsuspecting audiences as real. A few of such instances in this thread.
Top

AmericanSteve wrote:So CEO administration is allowing open attacks on China, even to the point of comparing them to Nazis, which always indicates a lack of intelligence, but any defense of China is tamped down.

Comparing the side that liberals disagree with ‘To Nazis’ is a common socialist tactic. Boris Johnson and the whole UK government is compared to Nazis, Donald Trump and the entire US government is compared to Nazis. Yet, the NASD members (the national socialists, aka, the real NAZI party) must be laughing in hell, especially Himmler. Historically NAZIs hated Communists and fought them on the streets of Germany.

Rational defense of the People’s Republic of China is absolutely encouraged on CEO. However state media style, that there is one truth, the Official State truth, and the great firewall will protect all it’s citizens from being brainwashed from the outside world, should be discouraged.

Can you pro and anti China posters start a new thread somewhere please. Everyone has a right to express their opinions (within reason), but not all over the forum . Thanks.
Cambodia Expats Online: Bringing you breaking news from Cambodia before you read it anywhere else!

The reported militarization of Wuhan's P4 Lab has raised new questions about the origin of the Covid-19 virus and the apparent cover-up that has occurred since it was first made public.

Following the removal of the most senior health officials in Wuhan yesterday, Chinese State Media has just reported that Chen Wei, China's chief biochemical weapon defense expert, is now to be stationed in Wuhan to lead the efforts to overcome the deadly, pneumonia-like pathogen.

According to the PLA Daily report, Chen Wei holds the rank of major general, and along with reports that Chinese troops have started to "assist", it strongly suggests that the PLA has taken control of the situation.

BREAKING NEWS
Everyone at John Lennon airport has been quarantined.

If it was an imaginary airport, it would be funny.

For those people flying into, out of, or currently waiting for a transfer flight at that international airport in Liverpool, that would be super scary!

Anchor Moy wrote: ↑Sun Mar 08, 2020 12:30 pm LOL. No lockdown in France where the coronavirus is turning everyone blue. Actually, they are staging the world's biggest assembly of Schtroumpfs in an attempt to beat the Germans for the Guiness Book of Records. You couldn't make this up. 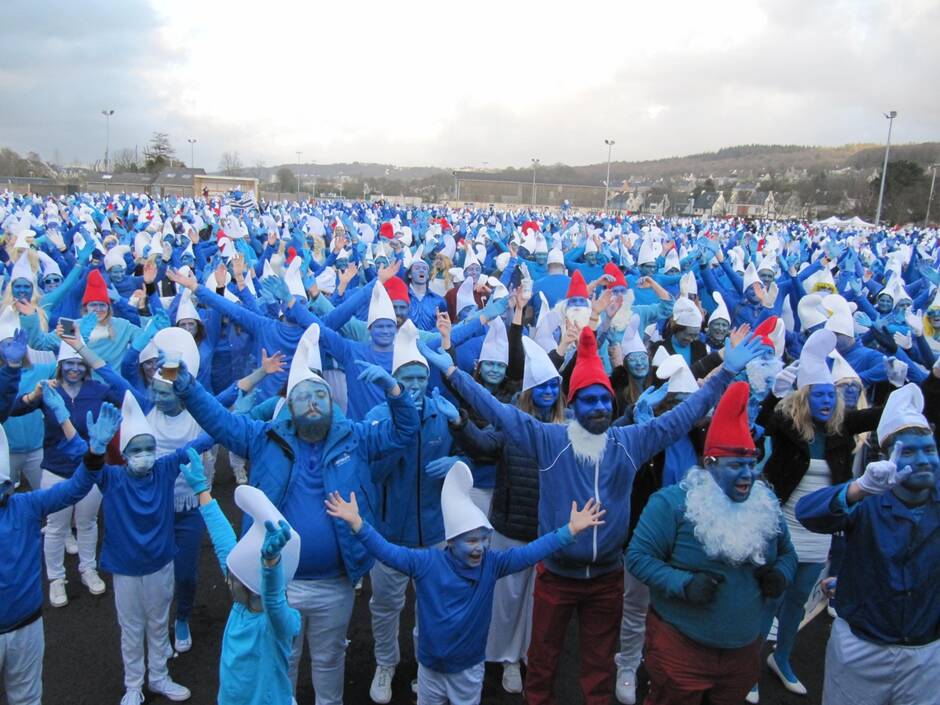 Still trying to beat the Germans at something...
Top

Italy is in big trouble and I think it might be cultural. I have a theory as to why it has exploded there.

February 25 was shrove Tuesday, also known as Mardi Gras or Fat Tuesday. In the preceding week the Italians celebrate with Carnevale - meaning goodbye to meat - it's the penance for Lent. All over Italy families gather - large families - all kissing three times on the cheek and whole villages get in on the act, followed up with lots of church activity including holy communion with the whole congregation all drinking wine from the same cup.

Italy's first case was at the end of January. Carnevale starts a few weeks later and, hey presto, it went from a few dozen 2 weeks ago to over 4000 today and that is just the start of it. I do not know if any of these festivals and gatherings were cancelled or scaled down but judging by the explosive rate of infections there it looks like they were not.

Add in the parlous state of Italian banks and the economy as a whole and it is not too hard to see Italy in a terrible state by mid summer.

Khmer New Year is on 13th of April and could be the catalyst for an amplification of infection.
Top

Interesting theory. However, I think the traditions you describe are valid for all Catholics, certainly the southern European (and South American) variations. And, IF it were for the Italian variation only, why mainly in northern Italy, why mainly in one region (Lombardy)?

I've been puzzled: why is Corona Virus so prevalent in that specific Italian region (and in Iran, btw). But I really don't have an answer.

As for Khmer New Year: Cambodians don't tend to kiss three times on the cheek nor do they drink wine from the same cup.
Top

Interesting theory. However, I think the traditions you describe are valid for all Catholics, certainly the southern European (and South American) variations. And, IF it were for the Italian variation only, why mainly in northern Italy, why mainly in one region (Lombardy)?

I've been puzzled: why is Corona Virus so prevalent in that specific Italian region (and in Iran, btw). But I really don't have an answer.

As for Khmer New Year: Cambodians don't tend to kiss three times on the cheek or drink wine from the same cup.

Yep, it's just a theory and yes, Catholics globally all have that in common, but the latin American countries are in summer time so not good flu virus time, and the area in question is northern Italy and so quite cold this time of year. I think this area had a cluster from somewhere and the gatherings did the rest. Spain should of got the same though, although it is much warmer than northern Italy.

Iran is a mystery being quite isolated in terms of trade and tourism. But gatherings in mosques every Friday, or every day for some people, could be a reason. The South Korean outbreak was from a Christian group, so it seems that these big gatherings turbo charges this thing.

I have not been a doomsayer or dismissive about this thing - a healthy concern but nothing more. But I have to say that every day it just seems to be getting worse and there is no end in sight. This panic buying is the most worrying thing at the moment and has the potential to be dangerously disruptive in short order.
Top

I think, just my theory, that once the virus "gets out" anywhere it spreads really quickly.
And that that will happen everywhere very soon.
Italy, Iran etc are just the start of virus going "pandemic" - ie freely spreading everywhere.
Some simple reason allowed that to happen in those countries- an early undiagnosed case or two - and then it was off and running.

The quarantines/travel bans etc are only going to slow the virus but are unsustainable and also full of holes.
There is no stopping this thing, just slowing it down.
But that is very useful in itself - allowing those countries with strict isolation regimes a few extra months to prepare.

Personally i reckon it will kill many more people than the common flu -
but nowhere near as many as the Spanish flu. Our ability to respond is a hell of alot better today than in 1918.

The disruption to the functioning of the economy, and society generally, may even diminish when it goes "fully pandemic"
because the travel bans, etc will no longer have any purpose and will be dropped.
The panic responses are also likely to diminish too, once the world sees the actual reality - bad as that may be, it will not have a disastrous effect on most peoples health.

But nobody really knows.
One thing for certain, the next few months are going to be "very interesting" to watch and see how this all pans out.

Just a personal interest for me - whether China overturns a million years of eating up all the world's wild animals and imposes a CCP style repression of the practice.
Thank God Xi Jinping does not read the conspiracy theorists and is likely believe the cold hard reality that this is the practice that is introducing new viruses into the human population really regularly.
Top
Post Reply Previous topicNext topic
2980 posts