China has denied using forced prison labour after reports that a six-year-old girl in England had discovered a cry for help inside a Tesco card allegedly made by inmates.

Qingpu prison in Shanghai has come under scrutiny after a note was found in a Christmas card that read: “We are foreign prisoners in Shanghai Qinqpu prison China. Forced to work against our will. Please help us and notify human rights organisation.”

Geng Shuang, a spokesperson for the foreign ministry, said at a regular press briefing in Beijing: “I can tell you responsibly that after seeking clarification from relevant departments, Shanghai Qingpu prison does not at all have … forced labour by foreign convicts.”

Tesco, which has withdrawn the card from shelves, said the Christmas card in question was made by the Zhejiang Yunguang printing factory, about 60 miles from Qingpu prison. On its website, the factory lists Tesco and Disney as its main clients.

The company told the state-run Global Times that it had “never had any connection with any prison”. Referring to Tesco’s comments, it said: “Why did they include our company’s name? Do they have any evidence that we have been working with any prison?”

Qingpu prison, a concrete and glass compound on 20 sq km of land, held 170 male inmates from 40 different countries as of last year, according to a report by the state-owned broadcaster International Channel Shanghai (ICS). More than half the prisoners were serving sentences of 10 years or more, often for drug-related crimes.

The use of prison labour is common in China, where the practice is legal, to subsidise maintenance costs of facilities and production for Chinese companies. According to Chinese law, “prison enterprises” should not have inmates work more than eight hours a day, five days a week.

But Chinese facilities often abuse the practice, forcing inmates to work in poor conditions for long hours – as long as 10 hours a day for six days a week, according to a labour expert, Li Qiang of China Labor Watch. Foreign prisoners are usually treated a little better.

Qingpu, the only jail to hold foreign male detainees in Shanghai, appears to be a source of pride in the Chinese prisons system. It was established in 1994 with the goal of “uniting punishment and reformation” and “combining education and labor [sic] work … to reform inmates into law abiding citizens,” according to the prison’s website.

It has 51 therapists, a distance learning scheme, an art programme and a library, adds the website, which has an English version. The prison also brings in cultural crafts to “nurture the sentiments” of inmates and “rectify behaviour”.

The report last year from ICS showed inmates taking Chinese lessons, playing basketball and calling family members, in a facility decorated with plants and flowers. One detainee from Ghana, sentenced to 14 years for robbery, said prison guards spoke to them “in a civilised way”.

The facility’s “labour reform” programme includes five days of work, one day of training or learning, and one day of rest, according to Qingpu’s website.

An account from Peter Humphrey, a former journalist and fraud investigator, who was detained at Qingpu for 23 months, contradicts that depiction. Humphrey said he and other foreign inmates were forced to make products for the fashion chains H&M and C&A, among other brands. He told the Guardian he was also denied essential medical treatment.
https://www.theguardian.com/world/2019/ ... stmas-card
Top

I see the Chinese cyber hack squads are quick on this. I was just Googling "Peter Humphrey, a former journalist and fraud investigator" and got this on the top rank results.

I have never seen the yellow waffle symbol before.

Curiosity caused a click and they go to gambling sites or something.

The first page is full of these curious sites BTW... 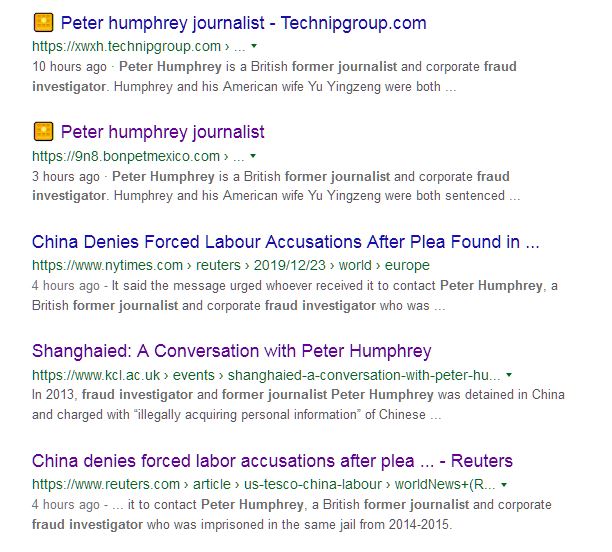 Inside the Chinese jail behind the Christmas card scandal
Former inmates at the prison where a plea was smuggled out in festive cards for Tesco say they faced forced labour and psychological torture
Lily Kuo
Sat 28 Dec 2019 19.00 GMT
Last modified on Sun 29 Dec 2019 07.24 GMT

For over three years, Leo spent his days at the Qingpu prison in Shanghai silently packaging sticky notes, face masks, gift bags and labels while guards kept close watch. If he refused, he would be punished – barred from reducing his prison sentence, making phone calls home, or worse.

This Christmas, a cry for help from Leo and other foreign inmates of Qingpu was smuggled out, hidden in a Tesco greetings card. China has called the card and allegations of forced labour by foreign prisoners a “farce”.

Now the Observer has gathered testimony from six former inmates of Qingpu prison who describe in unprecedented detail the conditions they claim they were forced to endure during their incarceration in China. These include being forced to work for a pittance and in some cases tortured for disobeying prison authorities.

“If you don’t work you would be an enemy. If you don’t work, you would become a target,” said Leo, who says he was one of two inmates who wrote a total of 10 cards calling for attention to the plight of Qingpu’s prisoners. “They will deprive you of so many things,” he said.

Leo, who provided his prison ID, court verdict and notice of his sentence, completed earlier this year, has asked to not reveal his real name for fear of retribution in his home country, where he believes Chinese influence is strong. The name of the other inmate who he refers to, who is still in Qingpu, is being withheld to protect his safety.

China has one of the largest penal labour systems in the world, one that human rights advocates say has flouted international standards against forced labour for decades. Beijing maintains that prison labour, legal in China, is done in accordance with the law. The ministry of foreign affairs did not respond to a request for a comment on this story.

The six former inmates, all released from Qingpu in the last two years, said they witnessed authorities forcing prisoners to work. Four of the six, including Leo, described having to work between five and six hours a day, sometimes seven days a week, for as little as 30 yuan (£3.20) a month.

Two of the group said they refused to work and were punished in a range of ways, including not being allowed to buy clothes, soap, slippers or food to supplement the meagre meals provided, all items that had to be purchased from the prison.

Two inmates, one of whom refused to work, described being tortured through sleep deprivation, being strapped to a wooden plank, and in one case, waterboarding. The prison did not respond to requests for comment.
https://www.theguardian.com/world/2019/ ... al-torture
Cambodia Expats Online: Bringing you breaking news from Cambodia before you read it anywhere else!