A British businessman and his Filipino wife have been rescued from their abductors in the southern Philippines, the country's army has said.

Allan and Wilma Hyrons were taken from a beach resort on Mindanao island by four armed men on 4 October.

Their kidnappers - thought to belong to the IS-loyal militant group Abu Sayaff - fled after a gun battle in the nearby Sulu region on Sunday.

Mr Hyrons, 70, who is a dual national, has lived in Mindanao's Zamboanga del Sur region with his wife since 2013.

On the day they were captured, the couple had reportedly been celebrating Teachers' Day at a nearby college.

Witnesses reported seeing them being taken from a hut and dragged to a motorboat.

They were given medical checks after their ordeal ended with the operation by Philippine forces at approximately 17:00 GMT on Sunday.

BBC News has been told that the UK military was involved in the rescue operation. 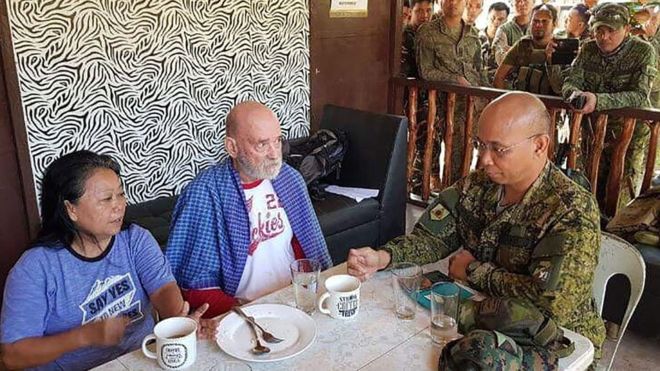