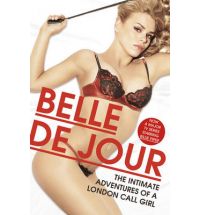 This turned into a TV series: Secret Diary of a Call Girl starring Billie Piper as Belle
(available on Kickass.to for the 4 Seasons it ran)

Brooke Magnanti (born November 1975[1]) is an American born naturalised British[2] research scientist, blogger, and writer, who, until her identity was revealed in November 2009, was known by the pen name Belle de Jour.[3] While completing her doctoral studies, between 2003 and 2004, Magnanti supplemented her income by working as a London call girl known by the working name Taro.[4] Her diary, published as the anonymous blog Belle de Jour: Diary of a London Call Girl, became increasingly popular as speculation surrounded the identity of Belle de Jour. Remaining anonymous, Magnanti went on to have her experiences published as The Intimate Adventures of a London Call Girl in 2005 and The Further Adventures of a London Call Girl in 2006. Her first two books were UK top 10 best-sellers in the nonfiction hardback and nonfiction paperback lists.