On a state visit to Nepal yesterday, Chinese President Xi Jinping...
"Anyone attempting to split China in any part of the country will end in crushed bodies and shattered bones."
Charming man.

At least he wasn't vague about it - like the KR's slightly ambiguous term "smash".
Top

SternAAlbifrons wrote: ↑Mon Oct 14, 2019 8:03 am On a state visit to Nepal yesterday, Chinese President Xi Jinping...
"Anyone attempting to split China in any part of the country will end in crushed bodies and shattered bones."
Charming man.

At least he wasn't vague about it - like the KR's slightly ambiguous term "smash".

Read all about it here...

The latest tactic of the protesters is to appear in small groups, flashmobs all around the city. This is designed to keep the police on the move and give the protesters time to get away and show up somewhere else. They call iy "Blossom Everywhere"

"The fragmented strategy is in part a response to the politicisation of the city’s MTR subway system, which has remained only semi-functioning since 4 October when chief executive Carrie Lam invoked emergency powers to ban masks at demonstrations"

"The subway once played a vital link allowing protesters to quickly avoid police and cross Hong Kong harbour in their protest strategy known as “be water” – a play on a saying by Hong Kong-American actor Bruce Lee on how to evade one’s enemies."

The Protest Movement has an Anthem now....

The Response to the Face Mask ban. This will not end well... 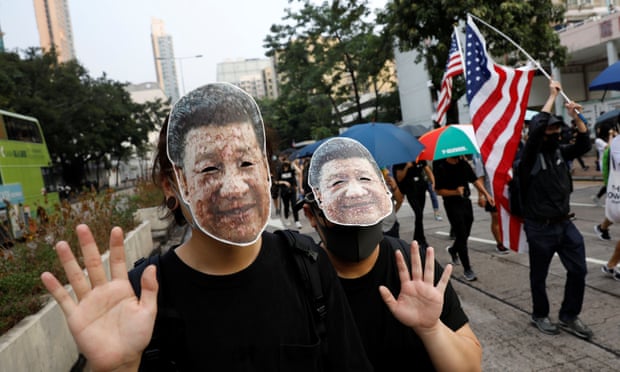 Attacking the Police Station with molotovs

Carrie Lam heckled and kicked out of Legco = Delivers address by Video link.

Winnie the Pooh threatening smashed bones and ground to powder.

If Chinese President Xi Jinping decided to go ahead, Lam's successor would be appointed by March and cover the remainder of her term, which ends in 2022, the newspaper said.

Lam's top successors include former head of the Hong Kong Monetary Authority Norman Chan, and Henry Tang, who has also served as the territory's financial secretary and chief secretary for administration, the report said.

Sources told the FT that officials in China want a stabilised situation before a final decision can be made on leadership changes, as they do not want to be seen to be giving in to violence.
https://www.asiaone.com/china/china-pla ... cial-times
Cambodia Expats Online: Bringing you breaking news from Cambodia before you read it anywhere else!

Well everything looked calm until that cop pulled out his gun and and started a fight with the guy wearing white coat and then he shot a guy who was doing nothing . Easy to see where the blame is here.

Give a man a gun or a penis and he will want to use it.
Cambodia,,,, Don't fall in love with her.
Like the spoilt child she is, she will not be happy till she destroys herself from within and breaks your heart.
Top

Try this one - setting fire to a person