Yeah, that place out 'there'. Anything not really Cambodia related should go here.
Post Reply Previous topicNext topic
69 posts

These Countries Just Restricted Travel From South Korea
By Kyunghee Park
24 February 2020, 10:52 GMT+7
Fourteen countries and a U.S. territory placed tighter entry restrictions on people traveling from South Korea after a sharp jump in coronavirus cases prompted the government in Seoul to raise its infectious-disease alert to the highest level.

Measures include banning entry for people who have been in South Korea in the past 14 days and mandatory health checks, according to the Ministry of Foreign Affairs. The number of infections in South Korea rose to 763 as of 9 a.m. local time, up from 602 Sunday, the most for anywhere outside mainland China. Seven people have died in the country from the virus.
https://www.bloomberg.com/news/articles ... ases-climb
Cambodia Expats Online: Bringing you breaking news from Cambodia before you read it anywhere else!

Shares in Japan fell as much as 4.5% on Tuesday morning as investors worried about the spread of the coronavirus.

But many analysts still expect the spread of the coronavirus to peak in the first quarter with a rebound in the second quarter.

"Those who expect the virus to kick off a global recession might be disappointed, as the impact is likely to be temporary," said Margaret Yang, an analyst with CMC Markets. "Central banks around the globe are ready to inject liquidity and cut down interest rates to cushion the headwind."

She added that the coronavirus is proving to be less deadly than SARS, just more contagious.

In China, the Shanghai Composite index was down nearly 1% amid mixed reports about efforts to contain the virus.
https://www.bbc.com/news/business-51624003
Cambodia Expats Online: Bringing you breaking news from Cambodia before you read it anywhere else!

BANGKOK, 24 February 2020: Final dates for the annual Mekong Tourism Forum are up in the air, and it is now confirmed the forum will not be held during the last week of April as earlier announced by the Mekong Tourism Coordinating Office.

In an email post to Mekong tourism stakeholders, the MTCO executive director Jens Thraenhart said: “We would like to inform you that due to the Coronavirus, we are waiting to hear the final dates of the Mekong Tourism Forum. MTF 2020 will take place in the UNESCO World Heritage town of Bagan in Myanmar, later this year. Stay tuned for upcoming developments.”

While acknowledging MTF 2020 should take place “later this year”, Thraenhart may have firm dates once he meets with Myanmar’s tourism officials at ITB Berlin during the first week of March.

The forum that represents the interests of six Mekong Region nations (Cambodia, China, Laos, Myanmar, Thailand and Vietnam) was scheduled for 28 to 29 April after being moved a week forward from its traditional time slot in May to avoid the onset of the monsoon season.

Now another rescheduling is in the pipeline, and it is now possible the event could be hosted either in September or October.
https://www.ttrweekly.com/site/2020/02/ ... new-dates/
Cambodia Expats Online: Bringing you breaking news from Cambodia before you read it anywhere else!

I wonder how "the government will pay taxes instead of the business owners" as HE says...

The government has decided to exempt all kinds of monthly taxes for hotel owners, and guesthouses in Siem Reap for four months, from February to May 2020, as a counter policy to the tourist slowdown caused by COVID-19 outbreak.

Announcing the measure at a press conference on the morning of 24 February 2020, Prime Minister Samdech HE addressed the issue of COVID-19 affecting tourism businesses in Siem Reap province; with the tax exemption policy providing relief for the tourism business to survive.

“The exemption applies to Siem Reap province only, and the government will pay taxes instead of the business owners,” said Samdech HE.
However, hotel and guesthouse owners still have the right to file their tax reports and use the online system as usual during the exemption period.

During the COVID-19 outbreak in China, the number of foreign tourists in Cambodia dropped by more than 60% while Chinese tourists fell by more than 90% in February 2020.

Capital Economics: ‘A process of de-globalization lies ahead’

The coronavirus joins a spate of other factors driving a decoupling of Western economies from China, Vicky Redwood, senior economic advisor at Capital Economics, said Monday.

Trade tensions between the US and China remain as the nations mull a phase-two trade deal. Differences in the two superpowers’ political systems also threaten to push them apart after years of increased globalization, Redwood wrote.

“Coronavirus on its own won’t suddenly precipitate a big decoupling between China and the West, but the virus adds to a list of other reasons why a process of de-globalisation lies ahead,” she added.

De-globalization may first show up in public companies, according to Capital Economics. The outbreak has already led firms including Apple and Tesla to warn of a hit to production efforts in China. Though the outbreak won’t curb globalization immediately, it highlights “the vulnerability of long and complex global supply chains” and could drive a shift in logistics, Redwood said.

Public health experts on Tuesday began publicly discussing the coronavirus as a disease which is expected to spread across much of the world population, including throughout the United States.

The CDC issued a warning Tuesday that it expects the illness to spread in the U.S. and that Americans should prepare themselves for "significant disruption in their daily lives."

"Ultimately we expect we will see community spread in the United States," Nancy Messonnier, director of the National Center for Immunization and Respiratory Diseases at the CDC told reporters. "It's not a question of if this will happen but when this will happen and how many people in this country will have severe illnesses. We are asking the American public to prepare for the expectation that this might be bad."

The warning came a day after The Atlantic published an article in which one scientist at Harvard University said Monday that containing coronavirus—which is officially known as COVID-19 and has infected more than 80,000 people and killed nearly 3,000 since it originated in Wuhan, China in December—may not be possible.

Although medical teams in China, Iran, Italy, and other countries where the virus has spread have worked for weeks to identify people with the respiratory illness, quarantine them, and stop them from spreading it to family members and friends, the virus could ultimately infect between 40 and 70% of the world population by the end of the year.

"I think the likely outcome is that it will ultimately not be containable," Marc Lipsitch, an epidemiologist, told The Atlantic.

Lipsitch emphasized that the disease is expected to spread in part because mild cases won't prevent people from going about their daily business, making it likely that they'll spread it. As with the current reported cases, many are expected to be asymptomatic.

The infection of up to 70% of humanity would still mean the likely deaths of millions of people, however, as Nils Gilman of the Berggruen Institute, an independent think tank, tweeted.

Thirty five COVID-19 cases have been reported in the U.S. as of Tuesday. Lipsitch estimated to The Atlantic that between 100 and 200 people in the country could actually be infected.

"That's all it would take to seed the disease widely," he told the outlet. "The rate of spread would depend on how contagious the disease is in milder cases."

The CDC plans to begin working with public health laboratories to screen people in Los Angeles, San Francisco, Seattle, Chicago, and New York City, according to The Hill.

Meanwhile, climate campaigners linked the rapid and likely persistent spread of COVID-19 and other infectious diseases to the climate crisis and the heating of the planet.

"A warming climate will exacerbate the emergence of other novel infectious diseases in the future," wrote Wendell Chan, program officer for Friends of the Earth, in the South China Morning Post on Monday. "Rising global temperatures will shorten winter seasons—in 2019, Hong Kong experienced only three days when temperatures dropped to 12 degrees Celsius or below. Certain infectious diseases like dengue and malaria thrive better in warm temperatures."

"So long as people live close together and global travel is easy, disease outbreaks are unavoidable," Chan wrote. "The emergence and re-emergence of infectious disease is, however, just one of the many health risks that climate change will bring about."

Our work is licensed under a Creative Commons Attribution-Share Alike 3.0 License. Feel free to republish and share widely.
https://www.scoop.co.nz/stories/WO2002/ ... ptions.htm
Cambodia Expats Online: Bringing you breaking news from Cambodia before you read it anywhere else! 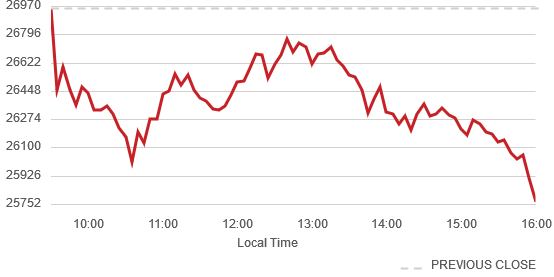 Financial markets suffered a sixth day of losses on Thursday, as traders dumped shares on fears that the spread of coronavirus will hobble the global economy.

In the US, the Dow Jones plunged nearly 1,200 points to lose 4.4%. It was the sharpest points-drop in history.

The string of declines has pushed indexes in Europe and the US down more than 10% from their recent highs - sending them into so-called "correction" territory.

The tumult comes as the coronavirus, which started in China, spreads rapidly around the world, restricting travel, upending global supply chains and prompting shoppers in some countries to stay home.

"Markets move sharply when fear and uncertainty are prevalent, and there is plenty of both right now," said Greg McBride, chief financial analyst for Bankrate.com.

Indexes in the US and London were poised for their the biggest weekly losses since the 2008 financial crisis, as the Dow retreated to levels last seen in August.

Globally, the share price declines of the last six days have wiped out more than $3.6tn (£2.8tn) in value.
https://www.bbc.com/news/business-51664652
Cambodia Expats Online: Bringing you breaking news from Cambodia before you read it anywhere else!

Im in Pattaya now and there is nobody lining up to take a boat trip , only one or two parasailing not hundreds, the locals must be feeling it.
I'm standing up, so I must be straight
What's a poor man do when the blues keep following him around.
Top

as of Monday, Japan is closing all schools for 1 month>
will other countries follow?
US stock market lowest since 2008

Good interview on BBC this morning with a Dr in Wuhan, ( sanctioned by the Chinese goverment) stating deaths are rising and everyone needs be prepared.

Should we be worried?
In a nation run by swine, all pigs are upward-mobile and the rest of us are fucked until we can put our acts together: not necessarily to win, but mainly to keep from losing completely. HST
Top


Maybe you mean largest one-day-drop since 2008?

Dow Jones still double of what it was in 2008. But don't worry, more drops will follow. Don't buy any stocks yet.
Top
Post Reply Previous topicNext topic
69 posts