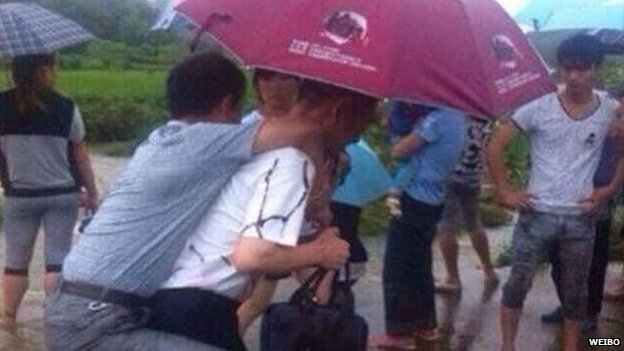 A picture of a city official being carried on the back of a local resident who wades through ankle-deep water in Lantian village in the eastern province of Jiangxi has been widely shared on the internet. The official, named Wang, was apparently searching for village children who had gone missing in a swollen river, state-run China Radio International reports.

A villager named Ding, described as a low-level clerk, offered Wang a personal lift over a flooded path, but Wang's acceptance of the gesture cost him his job. Local authorities thought the "inappropriate act" would have a negative social impact and "tarnish the image of party officials", state news agency Xinhua says. 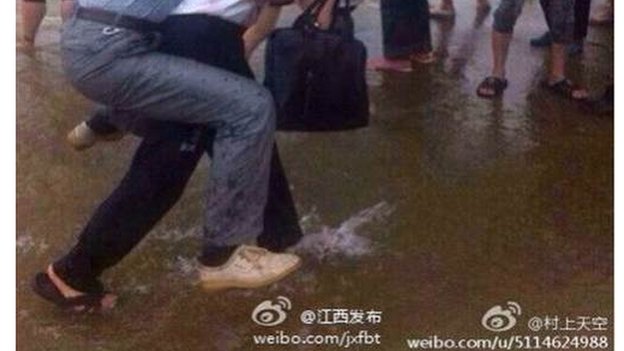 I'm not sure why the BBC chopped this image in two but it is humorous.

Apparently he was following another official's footsteps;

A 60-year-old villager in Zhejiang Province carried a communist official wearing leather shoes to prevent them getting wet, while visiting an area severely affected by flooding after Typhoon Fitow.

A netizen from Yuyao City posted a photo of the incident on Sina Weibo on Oct. 14, triggering outrage among netizens.

Voice of China reported that the water was about 2 inches (5 centimeters) deep. The photo shows an old man in gumboots carrying a younger man in leather shoes. Another man and a woman, both wearing gumboots, are seen following behind.
http://www.theepochtimes.com/n3/319143- ... cken-area/

What was this guy thinking? 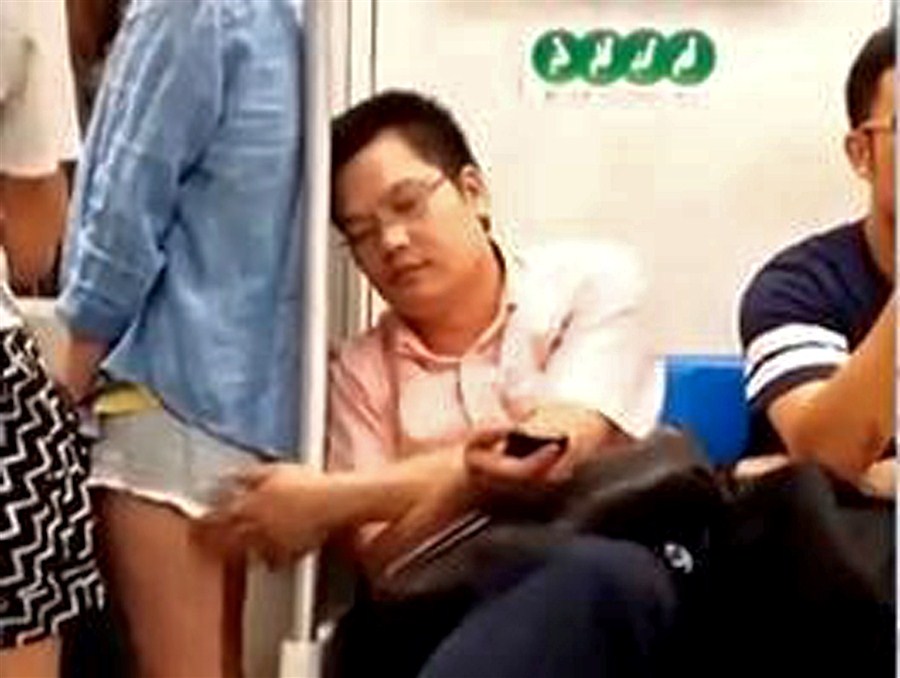 Manâ€™s indecent act costs him his job and Party membership
A MAN who indecently touched a womanâ€™s thigh on a subway train in Shanghai was kicked out of the Party and sacked from his job at a local travel agency yesterday.

The 38-year-old was also put under administrative detention, a punishment for violations not serious enough for criminal charges.

Police said Wang Qikang had been drinking when he twice deliberately touched a womanâ€™s thigh on a Metro Line 9 train on June 29. Police did not say how long he was detained for the indecent assault.

Wang was an executive at the state-owned Jinjiang Shanghai Travel Agency. He has been expelled from the Party and dismissed from his job, parent company Jinjiang International (Group) Co Ltd said.

A video clip of the incident taken by a witness was uploaded on weibo.com and web users tracked down Wang through a coordinated identity search on-line. Wang is said to have gone to the police station with his boss after his identity was exposed. He claimed he touched the woman accidentally while asleep.

The victim went to a police station on Sunday. The 21-year-old Taiwan native said she had felt she was being touched, but was unsure by whom so she did not report the incident at the time.

Web users have uncovered more of Wangâ€™s personal details over the past few days, including his wifeâ€™s company.

Wang said he disconnected his phone at home because of abusive calls. But his wife is still receiving many calls, Wang said. â€œThey should target me, not my wife,â€ he said.

This also backs up my claim about Godwin's law of photography:

As a crowd grows the odds of someone photographing the event approaches 1.
Scarier than malaria.
Top
Post Reply Previous topicNext topic
1 post • Page 1 of 1