Yeah, that place out 'there'. Anything not really Cambodia related should go here.
Post Reply Previous topicNext topic
10 posts • Page 1 of 1

Or what are you reading?

From Publishers Weekly
Historian Maguire (Law and War) and former drug smuggler Ritter delve into the world of the international marijuana trade of the 1960s and 1970s, tracing its quasi-utopian roots to its suppression during the War on Drugs. Utilizing hundreds of interviews, the authors reveal how early entrepreneurs bringing high-quality marijuana into the United States sincerely believed that these drugs could provide epiphanies otherwise inaccessible; making fortunes by supplying illicit drugs was, for them, a case of doing well while doing good. Such sums of money attracted genuine predators, from ruthless drug lords to brutal pirates. In addition, the hapless transcendental entrepreneurs found themselves faced with an American government marching grimly towards an enforced prohibition on all illegal drugs, hard and soft. The authors are sympathetic to the loftier goals of the soft drug pioneers while acknowledging the realities of uninhibited capitalism; grand ambitions often led to a dank prison cell or an unmarked grave.

Very interesting if you're into history. I really like it so far. (I'm halfway into it).

This book should be right up your alley phuketrichard!
Alcohol is necessary so that a man can have a good opinion of himself, undisturbed by the facts
Top

read it awhile ago an knew/know some of the players

The stories I could tell about Thailand, Cambodia , Mexico, USA and Europe in the 70-80's
In a nation run by swine, all pigs are upward-mobile and the rest of us are fucked until we can put our acts together: not necessarily to win, but mainly to keep from losing completely. HST
Top

Richard write a book. That history is valuable. That's how I worked my way through Uni.
Or a least audio it.
Top

Currently reading the complete works of H.P. Lovecraft in chronological order. About 2/3 of the way through.
Top

OrangeDragon wrote:Currently reading the complete works of H.P. Lovecraft in chronological order. About 2/3 of the way through.

Did you grow up with the "Alone in the dark" PC games?
Top

Twilight of Abundance, by David Archibald, more rubbish from those conspiracy-theorist, tree-hugging commies that think the environment matters!

The hardest thing to sell people on is the obvious. That is because the self-evident is so familiar that many instinctively have contempt for it. Like a prophet in his own country, the obvious is often too mundane to overawe.
David Archibaldâ€™s book, Twilight of Abundance, is a collection of ideas that it seems we might have thought up ourselves. Archibald points out that we have been living in an unprecedented time of food and energy abundance in a period of peace unprecedented since the fall of the Roman Empire. And he supplies the evidence to back his point up. Then he argues that our civilization canâ€™t count on winning the lottery every week.
And yet that is what we have effectively done and intend to continue to do, in thrall to agendas that command our full attention, though we have forgotten what they are supposed to achieve. Issues such as â€œglobal warmingâ€ or â€œgay marriageâ€â€”which may have some worth in themselvesâ€”are treated as existential problems, even as far more pressing issues are shunted to the side.
Archibaldâ€™s major contribution is to put the obvious front and center again. Once having awakened our interest in the undeniably real existential threats, he argues that policymakers ought to take prudent steps to transition into new technologies and arrangements necessary to ensure global security and sufficient food and energy for the worldâ€™s populationâ€”instead of living in the dream that these goods are givens, or falling into an ideological obsession with returning to some sylvan eco-paradise that never existed.
For his troubles David Archibald will probably be dismissed as an extremistâ€”a â€œclimate change denierâ€ or some suchâ€”although it is hard to see what he is extreme about. Perhaps the strangeness is really just his departure from the talking points that are endlessly prescribed by the media, a kind of disorienting looping around to the place where we began.
That is precisely the value of his book. And while you may not subscribe to his arguments in their entirety, there is no doubt that David Archibald is asking the right questions. What will we use for energy in fifteen yearsâ€™ time? What will the world eat, given its burgeoning population? Can we really count on the Pax Americana continuing indefinitely into the future? Important questions all.
And if the answer to any of these is â€œI donâ€™t knowâ€ or â€œNobody on TV is talking about this,â€ then perhaps politicians should begin to focus on them. Better at least than continuing with their current obsession with trivial but politically correct pursuits.
The one obvious defect in Archibaldâ€™s book is the title: Twilight of Abundance. This book is not about unavoidable impending tragedy. Archibald argues that we are not doomed to a new dark age. On the contrary, an even more prosperous and fulfilling future awaits us, but only if we keep our eyes open and use our common sense.
Jesus loves you...Mexico is great, right?

Fabric of the Cosmos: Space, Time and the Texture of Reality by Brian Greene.

Looking forward to reading Lawrence Kraus and his new book Something From Nothing.
The idea that seeing the world is going from place to place to look at obvious things is an illusion natural to dull minds.
Top

I still need to finish reading A Brief History of Time.

It's taking me longer to read it than it took to write it.
"Life is too important to take seriously."

"A prayer for Owen Meany"
In a nation run by swine, all pigs are upward-mobile and the rest of us are fucked until we can put our acts together: not necessarily to win, but mainly to keep from losing completely. HST
Top 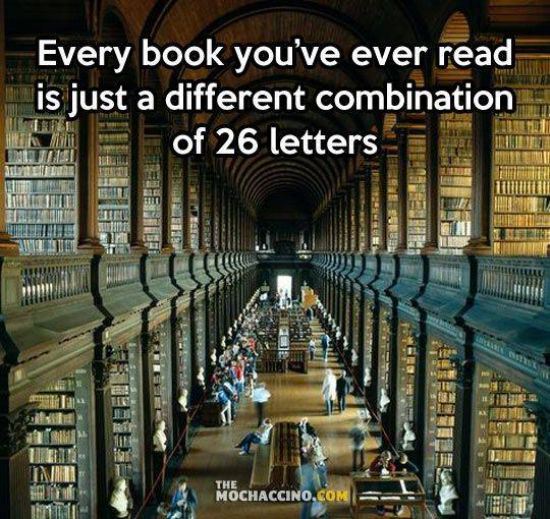 The world's largest library is the British Library with 170 million items and 1.75 million visitors a year.

You're welcome.
The idea that seeing the world is going from place to place to look at obvious things is an illusion natural to dull minds.
Top
Post Reply Previous topicNext topic
10 posts • Page 1 of 1