Thailand: Land of a Thousand Generals

Thailand: Land of a Thousand Generals 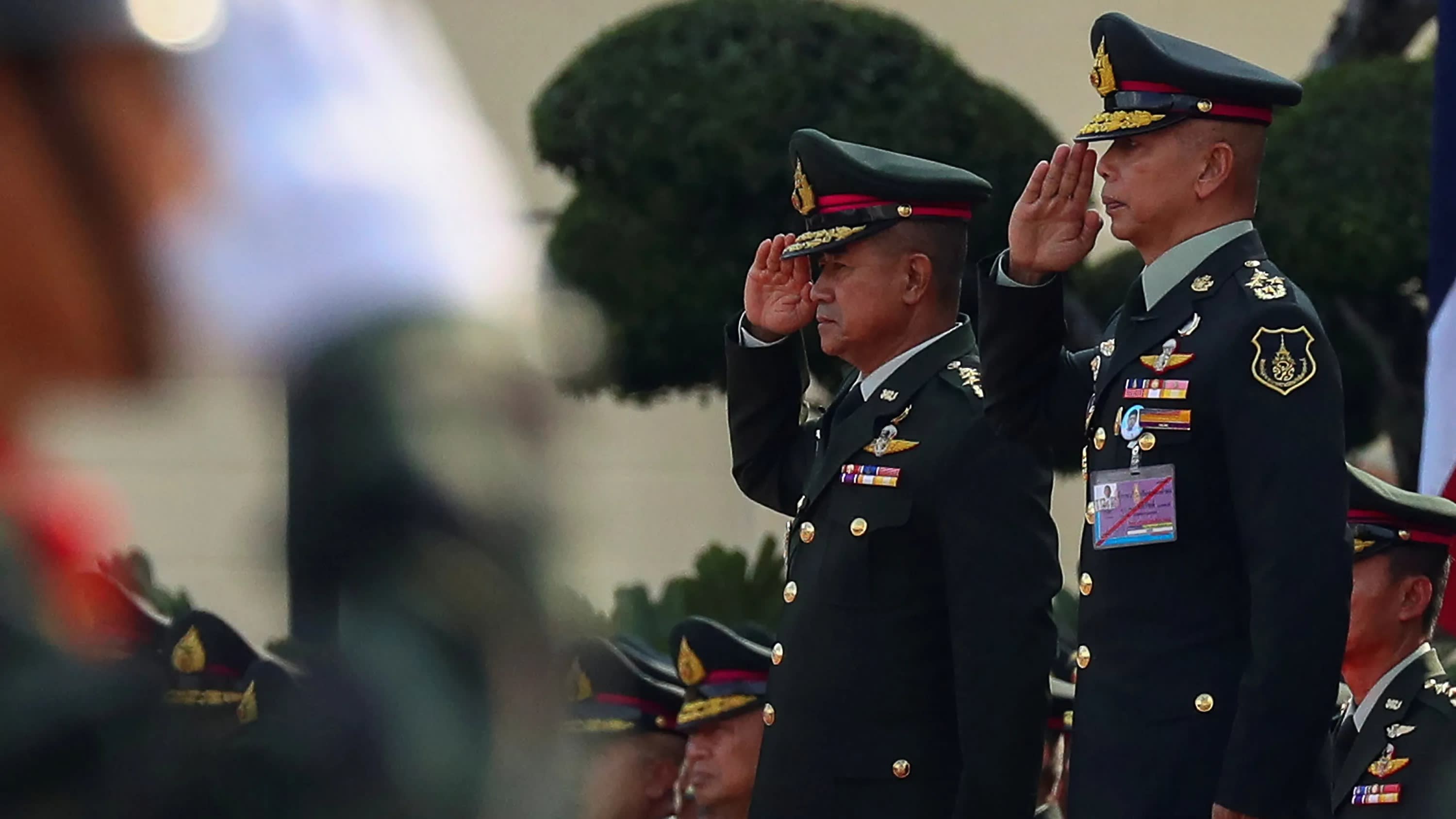 Many Thai generals busy themselves with tasks that are often performed by those of lower ranks in other military forces. © Reuters

BANGKOK -- By September each year, virtually all Thailand's newly promoted generals, air marshals and admirals have been confirmed in their new positions.

2019 was fairly quiet with just 789 appointments, well below the 980 seen in 2014 and 944 in 2017, according to the Royal Gazette, the official organ in which new laws are promulgated and public sector appointments announced.

Thailand's epic number of flag officer promotions amounts to more than double the 400 or so managers Tesco employs for stores larger than 1,000 sq. meters.

In a 2015 paper for the Peace Research Institute of Frankfurt, U.S. academic Paul Chambers, a leading authority on Thailand's military, reported 306,000 active duty military personnel and 245,000 reserves for a total of 551,000 -- about 0.8% of the population. It also reported that there is one general for every 660 lower-ranking members.

In comparison, the troop-based ratio for the U.S. Army, where the number of generals is capped by Congress, is about one general to every 1,600 enlisted personnel. There are only a half dozen four-star generals left in the British army, which has been severely depleted by budget cuts. Equivalencies are inexact, however; Thai officers, for example, rarely retire early.

One foreign observer estimates that Thailand has between 150 and 200 four-star generals in actual command positions. "A lot of what four stars do here would be done by a colonel or lower elsewhere," he told the Nikkei Asian Review. The number of generals in Thailand ceased to be based on troop numbers in the latter part of the 1980s. (Photo by Manit Sriwanichpoom)

Mismatched duties led to protocol problems in the late 1980s and '90s, when there was increased contact between the Burmese and Thai militaries, particularly along the border. The Burmese 'tatmadaw' followed a British model from colonial times that made them more parsimonious with promotions; counterparts sent to meetings with Thai generals were sometimes majors or colonels.

Official salaries based on rank are not high -- around 60,000 baht ($2,000) a month for a two-star general. Senior officers in command positions do better, however, because they receive additional payment for the position -- an arrangement that means a promotion in rank, but to a less active or noncommand position can result in a loss of income. Underemployed senior officers often become "experts" or "advisers."

Senior officers without exception retire at 60, like all Thai public servants. They have both time and reason to seek second jobs while serving. Some of the most lucrative sinecures are in over 50 state enterprises, including national flag-carrier Thai Airways International. The military controls more land than any other entity in the country, and owns many businesses outright, notably television and radio stations, ostensibly for national security reasons.

Under the constitution, the armed forces exist to protect the monarchy, national integrity and sovereignty, just as they do in many other countries. However, the military has traditionally been assigned an additional role that is almost buried at the end of Section 52 of the constitution: "Armed forces shall also be deployed for the purpose of developing the country."

Military development divisions continue to fill roles that elsewhere would be assigned to local civil authorities: agriculture, forestry, constructing public buildings and remote infrastructure, even schools. "Thais have soldiers who spend some of their time farming," a military observer told Nikkei. "That gives them a footprint all around the country." The question of whether the military is fit for its main purpose -- national defense -- is moot in the absence of any credible external threats. Thailand's main security issue is three restive, Muslim-dominated provinces in the far south where tensions flared up again in 2001. The unrest has since claimed more than 7,000 lives but has been contained and had a negligible impact on other parts of the country.

Thailand's oldest general, Saiyud Kerdphol, will be 98 in March. He saw service in World War II and Korea and retired in 1983 as supreme commander. On his watch, top brass numbers were still based largely on the number of troops under their command.

"They are my sons, but I am not happy," Saiyud told Nikkei. "If we can take the military as an institution away from politics, that would be a first step. Everybody being a general is unbelievable. Full generals don't have a seat to sit in or a job to do."
Top
Post Reply Previous topicNext topic
1 post • Page 1 of 1