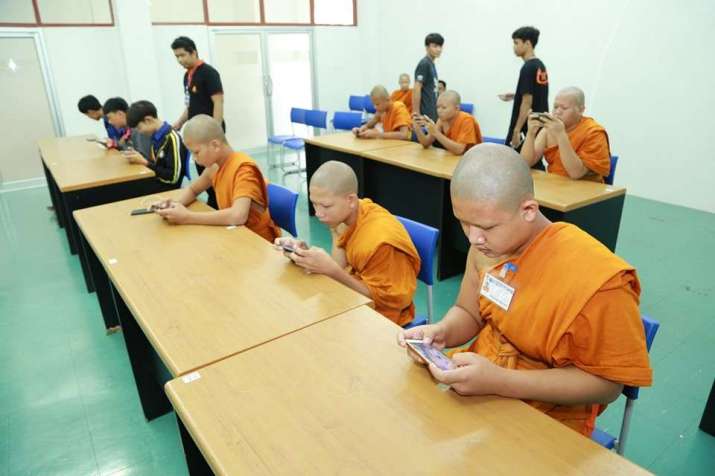 A team of novice Buddhist monks emerged victorious at a video gaming competition at the 2019 Khon Kaen University Nong Khai Fair. The fair is an annual competition, held this year from 15–18 August, in northeastern Thailand, and features academic and gaming, or e-sports competitions. The team of novice monks are high school seniors from Balee Sathit Suksa, a high school for monastics in Nong Khai Province.

“The novices wanted to try entering the competition, so we gave them that opportunity. However, we didn’t expect them to actually win,” chuckled Kokkiad Chaisamchareonlap, a monk and academic coordinator at the school. (Coconuts Bangkok)

According to Chaisamchareonlap, while the school is dedicated to novice monk students, they only study religion for 20 hours each week. The rest of their school time is spent on courses from a traditional academic curriculum. The students were introduced to the video game Speed Drifter through a computer class and desired to test their skills in the competition.

However, their victory did not come without controversy. As the Coconuts Bangkok news website reported, Twitter user @ParnkungTH wrote after the competition: “Usually I don’t make a big deal out of religious things, but I think this is inappropriate. It’s not illegal nor is it extreme, but I just feel like the monks should not have worn the robes to compete in the tournament.”
https://www.buddhistdoor.net/news/novic ... n-thailand
Cambodia Expats Online: Bringing you breaking news from Cambodia before you read it anywhere else!

Users browsing this forum: No registered users and 170 guests