Side Line girls and agents in Chiang Mai

Side Line girls and agents in Chiang Mai 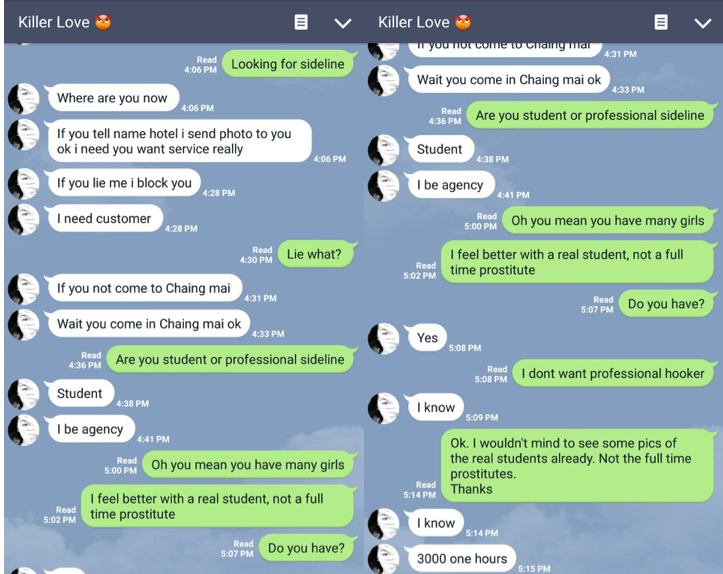 ..no stingy guys, so in order to see the pictures she charges THB 500 upfront but she guarantees that she will keep providing new girls if you're not satisfied.

The perfect Thai sideline girl is a (shy) student girl who wants to finish her study and doesn't 'lower' herself to work in a bar or brothel, while she doesn't have the time or interest to work in a massage shop. It could also be a more spoiled university girl who doesn't want to loose face working in the sex or massage industry, but craves the latest iPhone.

Most sideline girls don't focus on foreigners at all, in fact they might have never been with a foreigner before, this is mainly a Thai world with Thai sponsors that completely goes past most foreigners' perception and experience of Thailand. Reasons why these Thai girls mainly have Thai customers is because they are too shy, because they feel more familiar with Thai sugardaddies or because they don't speak much English.

A few years ago, Chiang Mai's Sideline Industry was florishing. Models would fly over from Bangkok and do a whole series of guys, booked in advance by an agent. The market was too competitive in Bangkok so Chiang Mai was a weekend out for them.Back then, the prices weren't that high, a thousand or a thousand five hundred could land you with a superhot girl.Times have changed and some of the sideline industry has moved to the erotic spa businesses: for a lot of girls, it's easier money, just wait for the customer to show up, offer more services and perhaps make your own deal with a customer they like outside of office hours.

This sideline agent intermediates between sugar daddies and sideline girls for short-term services at THB 3,000 per time as well as a long-term sugar daddy relationship at THB 10,000 - THB 70,000+ per month. Most of these girls are real students, pretty and they want someone to look after them. It's not cheap, but you get what you pay and if you want a really pretty sideline girl these are the real market prices now.

full. https://www.chiangmailocator.com/wiki-s ... ng-mai-p38
The idea that seeing the world is going from place to place to look at obvious things is an illusion natural to dull minds.
Top
Post Reply Previous topicNext topic
1 post • Page 1 of 1