Thailand is Cambodia's neighbor to the West, and this forum is dedicated to Thai news, stories, reviews, blogs, videos, Thai people and anything else related to the country. A lot of expats have both lived and worked in Cambodia and Thailand, and this area is a place to discuss all aspects of life in Thailand and what's going on there. Most topics are about Bangkok and Pattaya because of their larger populations of expatriates and tourists in those cities, but this is for all things Thai.
Post Reply Previous topicNext topic
117 posts 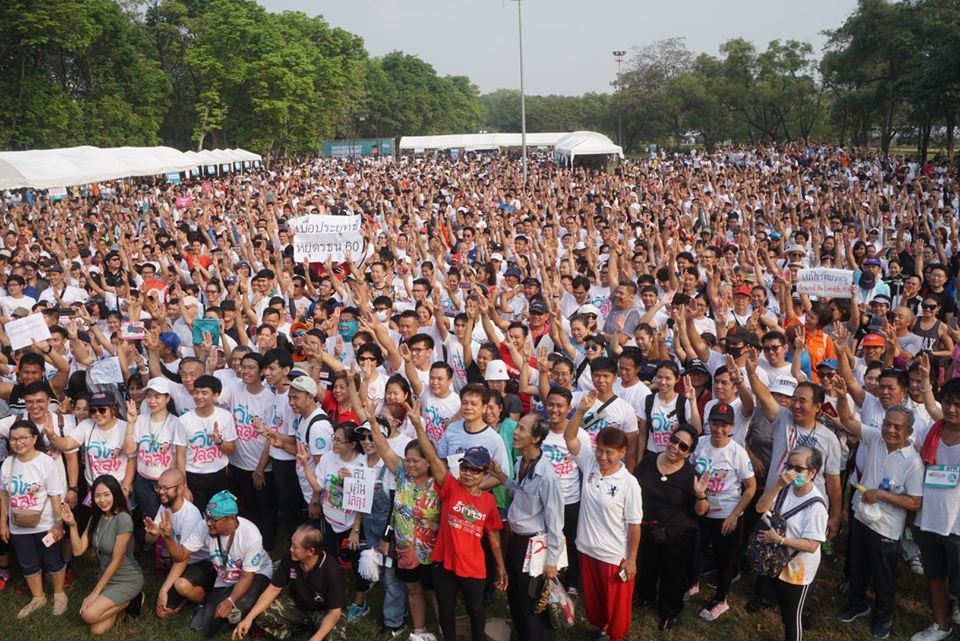 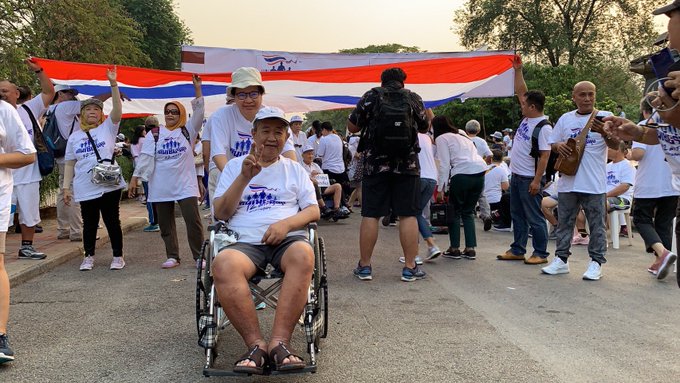 this photo speaks volumes for people that understand it ,
its about the 1976 uni massacre ordered by the old king rama 9
things are going to change! 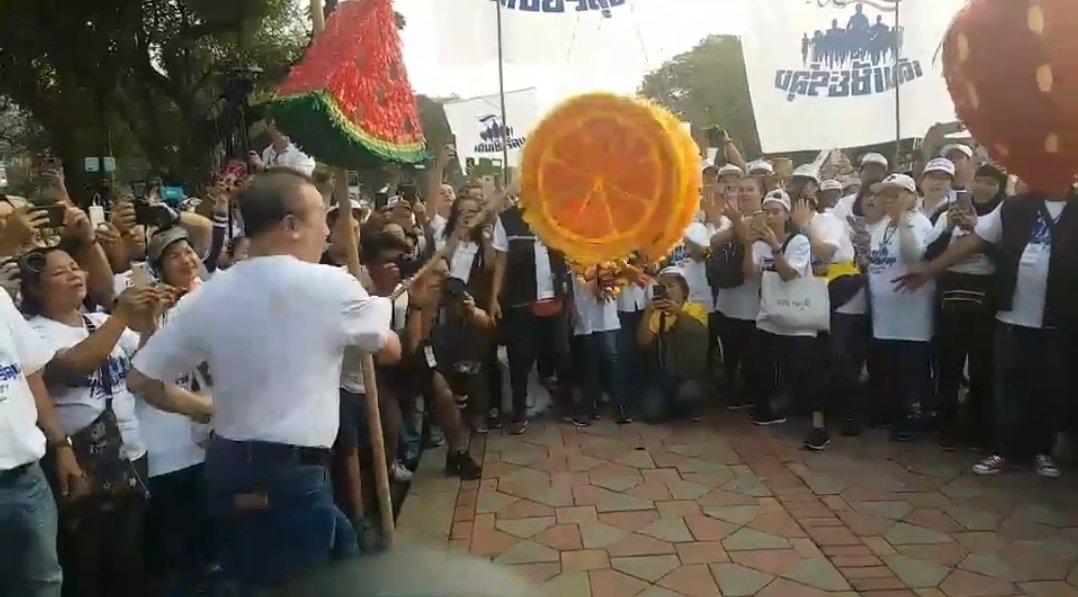 photo from protests today in BKK, these people paid to run/walk 600baht ,,they WERE not paid to do it
biggest protest since red shirt massacre the old king ordered..... 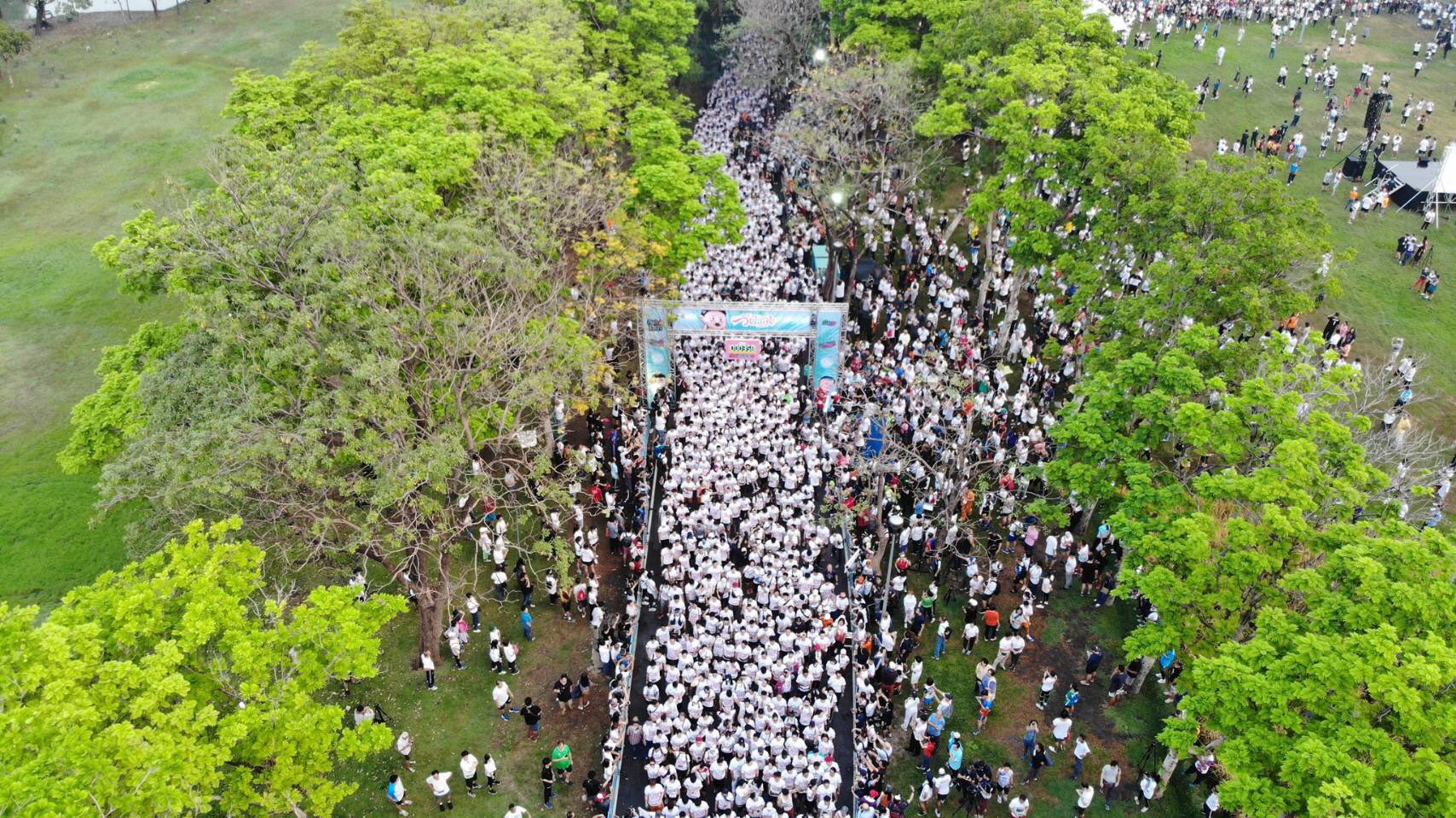 adders28 wrote: ↑Sun Jan 12, 2020 5:34 pm photo from protests today in BKK, these people paid to run/walk 600baht ,,they WERE not paid to do it
biggest protest since red shirt massacre the old king ordered.....

There's no way to verify of course, but it seems more likely that the army made the decision on their own following the assassination of Col. Romklao Thuwatham by a grenade attack. By attacking the army, the red shirts chose their own fate.
Top

adders28 wrote: ↑Sun Jan 12, 2020 5:34 pm photo from protests today in BKK, these people paid to run/walk 600baht ,,they WERE not paid to do it
biggest protest since red shirt massacre the old king ordered.....

There's no way to verify of course, but it seems more likely that the army made the decision on their own following the assassination of Col. Romklao Thuwatham by a grenade attack. By attacking the army, the red shirts chose their own fate.

Its not about red and yellow shirts anymore! long past that, different factions of army have problems, kings and queens guards against each other
totally different now.
absolute monarchy
glad they were peaceful yesterday, still have many protesting today
the king has just ordered police to stop stopping the traffic for royals as its upsetting thais, i think he very worried chaos is coming
his army regiment got burnt down, i have posted photos etc as media in thailand was silenced...
i predict a riot coming just dont know when...
when the red shirts starting burning bkk do you know why? they were chanting murdering bastard, thai media quickly blocked much as they were talking about the old king not the army or abhisit as thai media lied, they found out been lied to all their lives.....
now many speaking out about new king , too late to brainwash them, all this info is available in diplomatic cables released under cia freedom of info act
Top

adders28 wrote: ↑Mon Jan 13, 2020 1:05 pm the king has just ordered police to stop stopping the traffic for royals as its upsetting thais, i think he very worried chaos is coming

Just a few days ago twitter hashtag #ขบวนเสด็ (procession) went ballistic following that was the order you mentioned.
Top 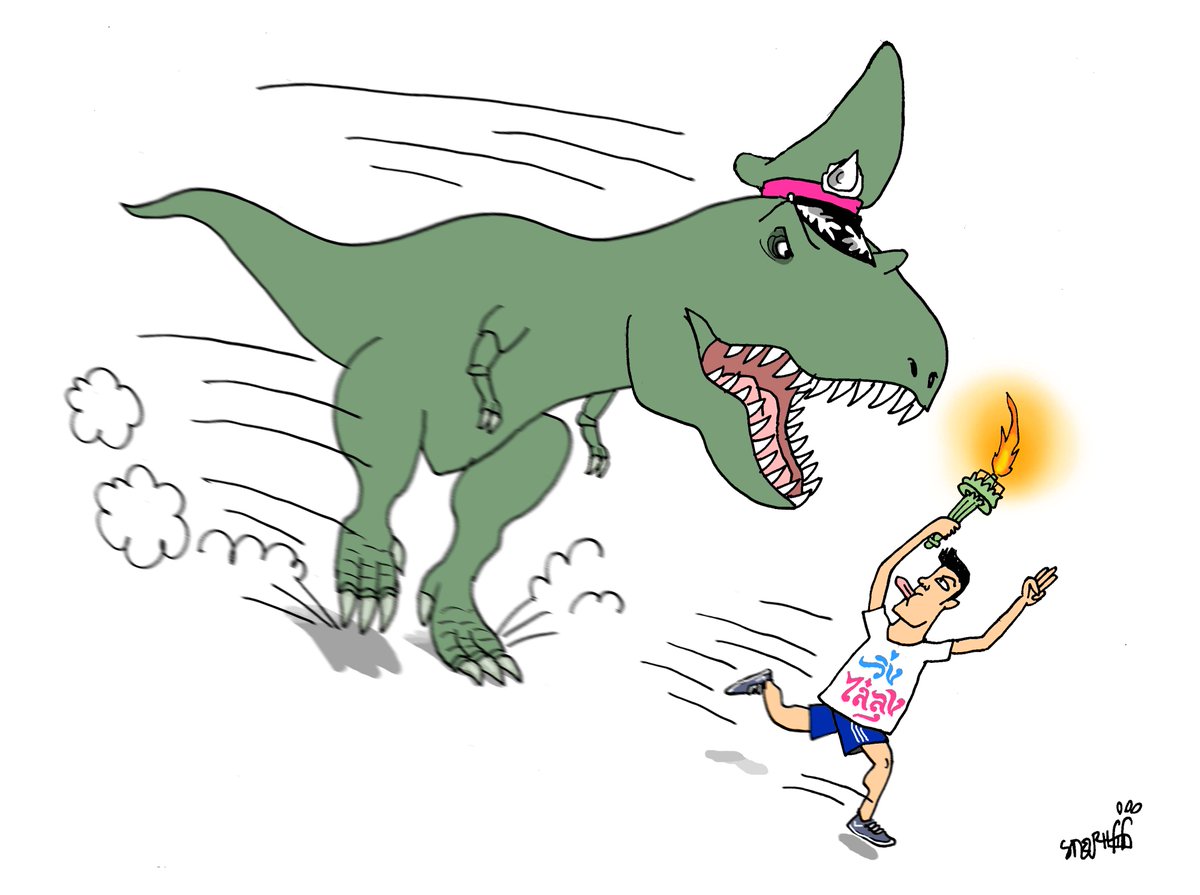 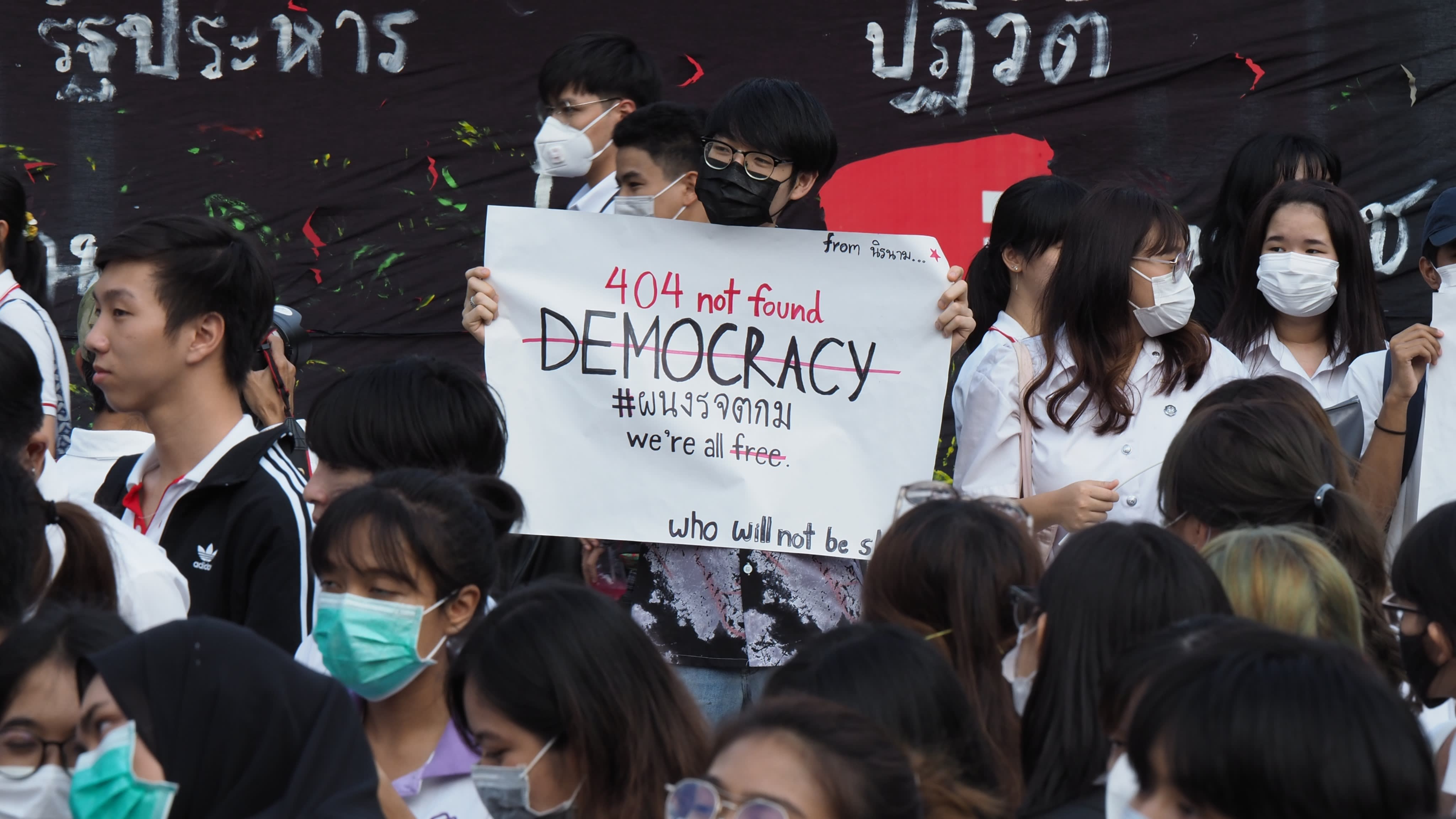 Protesters rally against the government at Srinakharinwirot University on Wednesday. Many students believe their demands for more democracy will fall on deaf ears. (Photo by Masayuki Yuda)

BANGKOK -- The dissolution of Thailand's second-largest opposition party has ignited unrest at universities as students organize demonstrations to demand more democracy, despite being warned by the government to stand down.

"We want our future back," Chonticha Jangrew shouted to a crowd of students at an anti-government protest at Srinakharinwirot University in Bangkok. "I am confident our new generation will not put up with being dictated to anymore," she said.

An alumnus of the university, Chonticha was one of a handful of student activists rallying against the junta in 2015, on the anniversary of the 2014 coup orchestrated by current Prime Minister Prayuth Chan-ocha. She ended up being arrested and spent 12 days in jail.

This time, hundreds of students gathered near the university's main playing field to hear her and several other speakers rail against the government. Some in the crowd held signs expressing opposition to the government's heavy-handed policies.

"The government curbed our rights in the name of national security," said a student at the event. "Imagine our future if this situation continues. It's time to fight," she said.

Similar protests were held at other campuses throughout the week. On Monday, hundreds of students at prestigious Chulalongkorn University assembled to make their voices heard -- a rare occurrence as students there are not known for their activism. The demonstrations were joined by a group at Triumudomsuksa School, the first high school to take part in pro-democracy rallies.

The government had advised schools to discourage large gatherings due to the new coronavirus outbreak. Students ignored the advisory, with many donning masks to guard their health as well as identities.

There is growing unease among students that the government is ignoring calls for more democracy. On Feb. 21, Thailand's Constitutional Court ordered the disbandment of Future Forward, the country's second-largest opposition party. Led by the charismatic young millionaire Thanathorn Jungroongruangkit, the party had pledged to reduce the military budget, extend civilian control of the government, and review the role of the monarchy in politics -- all positions that are strongly supported by the nation's youth.

The court ruled that the 41-year-old leader had funded the party illegally by providing a loan at an extremely low interest rate. The judgment came under fire from 36 law professors at Thammasat University. 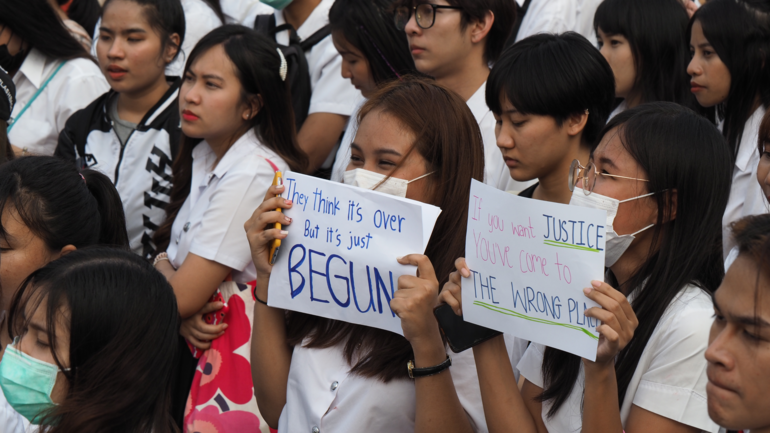 Students ignored government advisories not to congregate, ostensibly issued over fears of the new coronavirus. (Photo by Masayuki Yuda)

Thai laws prohibit political parties from receiving more than 10 million baht ($320,000) in cash donations, properties, or any other benefits. The court said the low-interest loan was a form of benefit. Thammasat professors, disagreed, claiming the court was overinterpreting the law.

Before the ruling, the party held 76 of the 500 seats in the lower house of parliament. Upon dissolution, 11 executive members of Future Forward were banned from running for office or being involved in a new party for 10 years. The remaining 65 were given 60 days to join other parties.

Although party supporters expected the 65 to stick with the opposition, in less than a week nine had defected to Bhumjaithai Party, a member of the ruling coalition. The move left Future Forward's 6.2 million voters in the March 2019 elections anxious that their views would not be represented.

"Students are awakened. The dynamic of change has started," Thanathorn said.

The prime minister seemed sympathetic, at least to a certain degree. "I am concerned about the gatherings. I understand their demand, but they should listen to many sources of information so that they have a better understanding of how the nation should progress," he said on Thursday.

Prayuth's ruling coalition vowed to help reconcile differences in the country, among them the generational divide between an entrenched ruling class and the country's increasingly dissatisfied youth.

The government, however, may be clueless. On Feb 14, Thailand's Culture Ministry revealed that Prayuth has ordered the production of at least one war film a year to boost patriotism and awareness of key institutions, such as religion and the monarchy.

The younger generation likely views these and other efforts as ways to force obedience rather than foster harmony. "The generations will never reconcile as long as Prayuth is the leader," a 19-year-old Srinakharinwirot student said.

So far, the gatherings have been peaceful and confined to campuses. However, Chonticha sees the movement gaining strength. "I believe university students will soon march to Government House or even Prayuth's residence," she said.

If the protests escalate, the country could see students manning roadblocks, a potentially dangerous development that in the past has led to police clashes and bloodshed.
Top

As I have mentioned for a number of years, everyone should leave Thailand while they still can. This looks like it's going to be the Big One. It may be difficult to depart after the collapse of society there.
Top

was in thailand when redshirts were going a bit buffalo don't remember any farang being targeted.leave? why?
Top
Post Reply Previous topicNext topic
117 posts