Not the kind of Thailand "fishbowl" experience men expect

Not the kind of Thailand "fishbowl" experience men expect 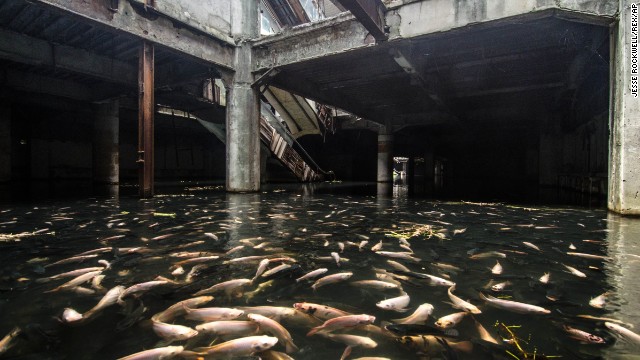 (CNN) -- Neglected by humans for almost two decades, New World Mall in Bangkok has attracted a slightly different clientele. Happily swimming among dilapidated storefronts and waterlogged escalators, koi and tilapia feast on fish food sold by enterprising locals and thrown by tourists who continue to descend on the surreal scene.
Built in 1982, the New World shopping mall survived only 15 years before trouble came calling, according to the Bangkok Post. In 1997, the Bangkok Metropolitan Administration demolished seven of the mall's 11 floors after it was found that the owner obtained permission for only four. The demolition, and a fire in 1999, left the mall roofless.
Open to the elements, the mall's ground floor became a pond filled with years of accumulated rainwater -- and clouds of mosquitoes. To remedy this obnoxious and potentially hazardous problem, people in the area decided to introduce fish species known to prey on flies. And just like that, a miniature ecosystem was born in the abandoned mall.
At first, there were only 10 to 20 regular visitors to the pond, local noodle vendor Jae Toom told the Bangkok Post. Toom said that most of these people were there only to feed the fish.
"But since photos of the pond were shared on Facebook last week, many more outsiders have come to visit," said Toom. "And that was when the BMA began to have problems with the fish pond."
On Monday, a Bangkok Metropolitan Administration official declared the building condemned and ordered barricades erected to keep the public out, the Bangkok Post reported. City officials cited health risks and structural instability as possible risks to visitors.
The administration hopes to determine whether New World is safe for public use by the end of July. If the structure is deemed unsafe, the plan is to raze it and relocate its aquatic residents to a far less interesting home.

Re: Not the kind of Thailand "fishbowl" experience men expec