Thailand is Cambodia's neighbor to the West, and this forum is dedicated to Thai news, stories, reviews, blogs, videos, Thai people and anything else related to the country. A lot of expats have both lived and worked in Cambodia and Thailand, and this area is a place to discuss all aspects of life in Thailand and what's going on there. Most topics are about Bangkok and Pattaya because of their larger populations of expatriates and tourists in those cities, but this is for all things Thai.
Post Reply Previous topicNext topic
18 posts

With all the media attention that was concentrated on the "Koh Tao murders" of David Miller and Hannah Witherdige, the deaths of other foreigners on the island tend to be forgotten. However, many of them died under strange circumstances...

The death of Luke Miller Koh Tao – one year on

One year ago the body of British holiday maker Luke Miller was found in the swimming pool of the Sunset Bar in Koh Tao. According to both the police and the owners of the Sunset Bar his death was caused by misadventure when a Luke Miller funeraldrunk or possibly drugged Luke climbed on top of a DJ stand and dived into the pool.
However, Luke’s travel companions did not swallow this story and neither did anybody else who could not understand why a party goer would make such a jump when it was obvious nobody was watching. The body of Luke Miller was not discovered until the following day. Also cause for concern where the injuries to Luke’s face the police suggested were caused by the barbed wire Luke would have had to climb over to make his jump, yet this seems to the rational mind to be simply another reason why the ‘jump’ story makes no sense what so ever.

A Thai post-mortem on Luke, 26 and from the Isle of Wight say he drowned but made no mention of bruises that resembled hand prints found on the upper part of this body.

There has been much speculation about what happened on that fateful night. We do know that CCTV footage places Luke at the Sunset Bar until the early hours of the morning, however security guards did not find him in the pool when they made their rounds at 5.30am the following morning, in fact his body was not discovered until around 7.20am.
The Samui Times was also told just after his death that Luke was not a swimmer and would never have got into the water alone. He also had an altercation over a lost motorbike key from the moped he was renting only hours before his death...
Full article: http://www.samuitimes.com/the-death-of- ... e-year-on/
Cambodia Expats Online: Bringing you breaking news from Cambodia before you read it anywhere else!

Forgotten here too! What happened re the German guy found cut up on the beach in SHV, and then we heard a rumor there was 2 deaths?? And people found before this, some floating in the sea with bruises. Never heard anything more which kind of worrying . I've been coming here 9 years but there's something in the air lately that doesn't feel right for me!
Top

Luke Miller – 1/4/89 – 08/01/16
Luke Miller, a bricklayer, was found dead at the bottom of a swimming pool on Sairee Beach, he had spent the previous evening with friends.
The post mortem in Thailand revealed that he had suffered head injuries and drowned, however the UK Home Office examination described the cause of death as unascertained.

Nicola and James Gissing, who were holidaying with Luke when he died made exhaustive efforts to get information from the Thai police. Mr Gissing and other friends of Mr Miller are convinced he was murdered. Luke’s family have been supported by the Island-based Lucie Blackman Trust in their quest for information. Matt Searle, the chief executive of the trust which supports families of those missing or who have died abroad, was at the inquest with the family including Luke’s mum, Sara, and his stepfather Mike Cotton.
http://www.samuitimes.com/luke-millers- ... d-koh-tao/


Luke Miller Thai pool death: 'No evidence' of murder
A post-mortem examination in Thailand showed Mr Miller had a number of small bruises on his face and legs and concluded he died as a result of head injuries and drowning, the inquest was told.

Toxicology tests showed he was one-and-three-quarters above the UK alcohol drink-drive level and also had traces of the drug Ritalin in his system.

Ms Sumeray said: "I can only record a conclusion based on the evidence before me, I cannot speculate about what may have happened."
http://www.bbc.co.uk/news/uk-england-hampshire-40281095
Cambodia Expats Online: Bringing you breaking news from Cambodia before you read it anywhere else!

“Koh Tao, where we bring people together, like rapists and their victims.” 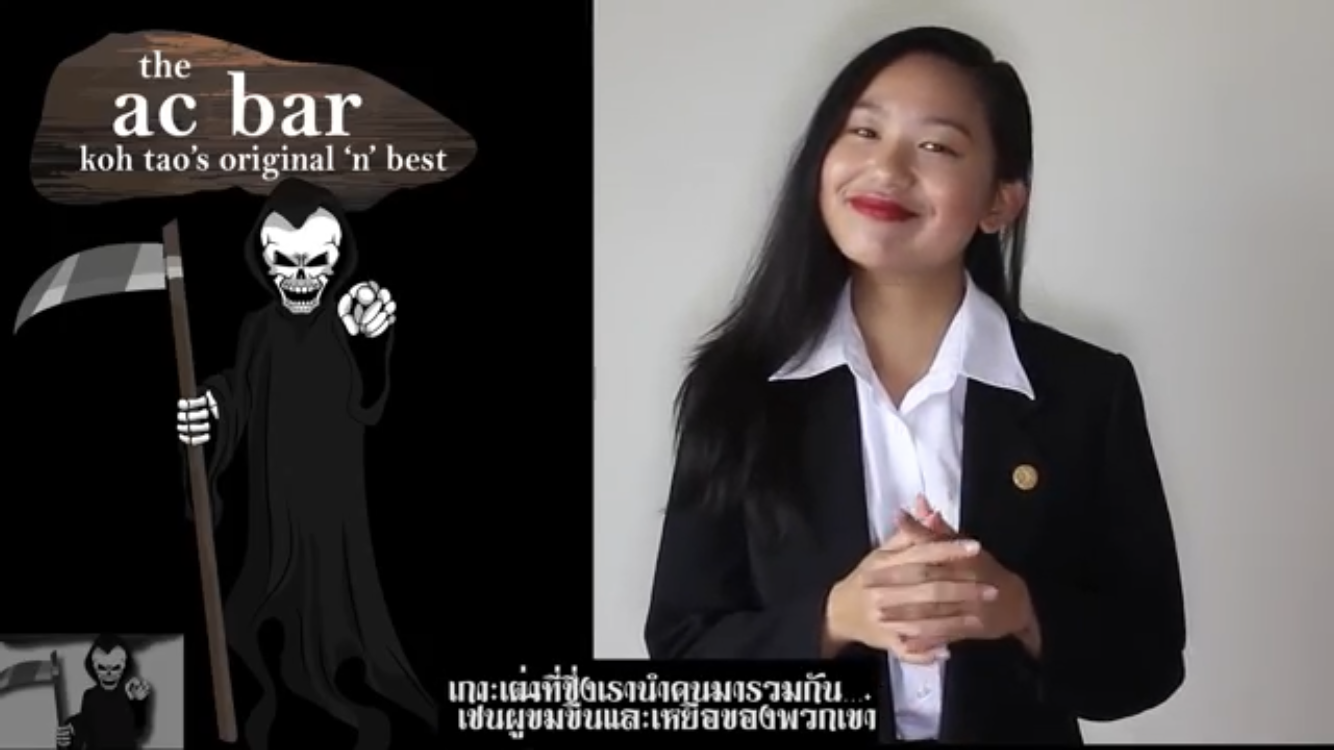 I thought we already had a thread on this.
Never trust a man who when left alone with a tea cosey, doesn't try it on.
Top

Koh Tao, Thailand - "Death Island of the Setting Sun" music video from Colombes Ran to the music of "House of the Rising Sun."

There is a long list of tourist deaths since August 2012 within the description under the video.

Here is my latest video about foreigners dying on Koh Tao. I have listed 17 including some that very few people have even heard about. 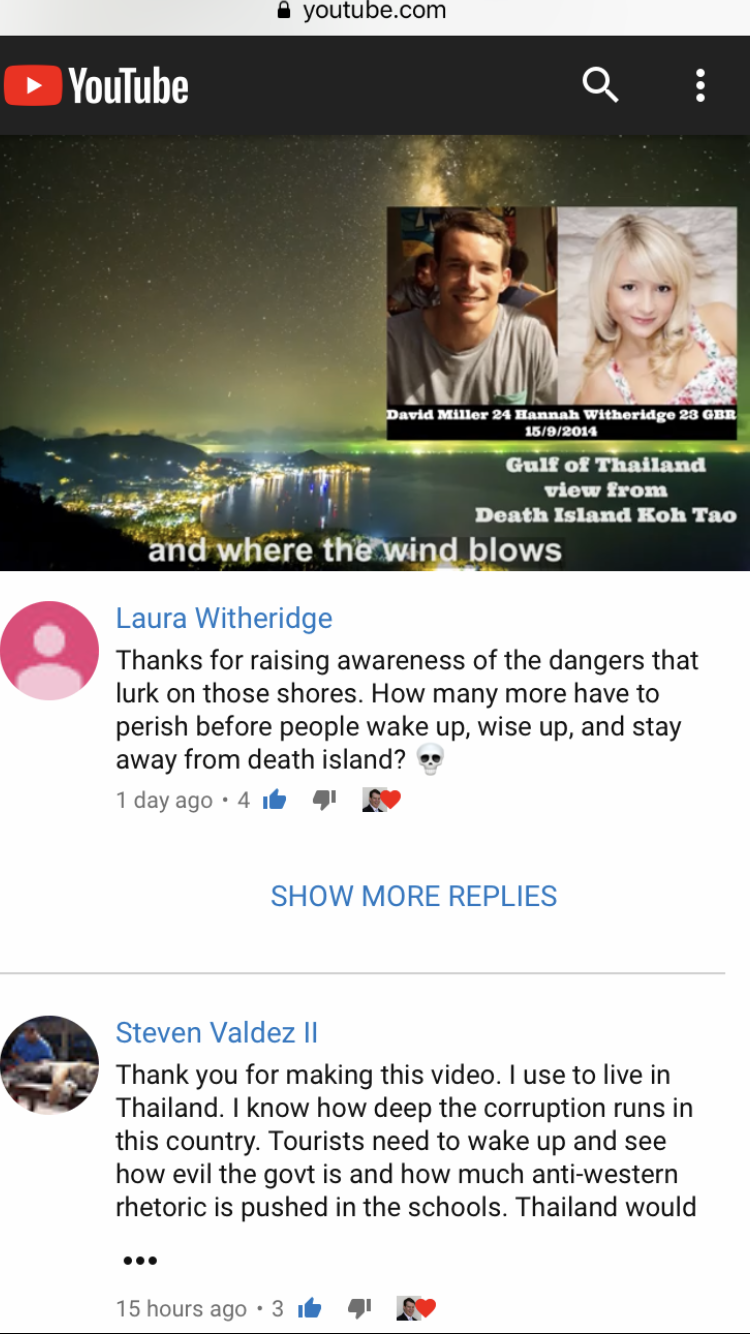 The video I published yesterday about 17 foreigners who died on Koh Tao (link above) has drawn a couple of notable comments. The first comment of approval came from Laura Witheridge who is one of the two older sisters of Hannah Witheridge. Many readers will recall that Hannah was brutally murdered on Koh Tao along with David Miller on the morning of 15 September 2014. Two small Burmese scapegoats were subsequently framed for their murders and sentenced to death.

Laura Witheridge had previously been threatened by the Thai Ministry of Justice and had also been the target of online trolls. One of those trolls was caught, tried and convicted and is now in prison in England.

Laura has had to put up with an awful lot of crap while grieving over her younger sister so I certainly appreciate her courage in speaking out publicly once more.
Top 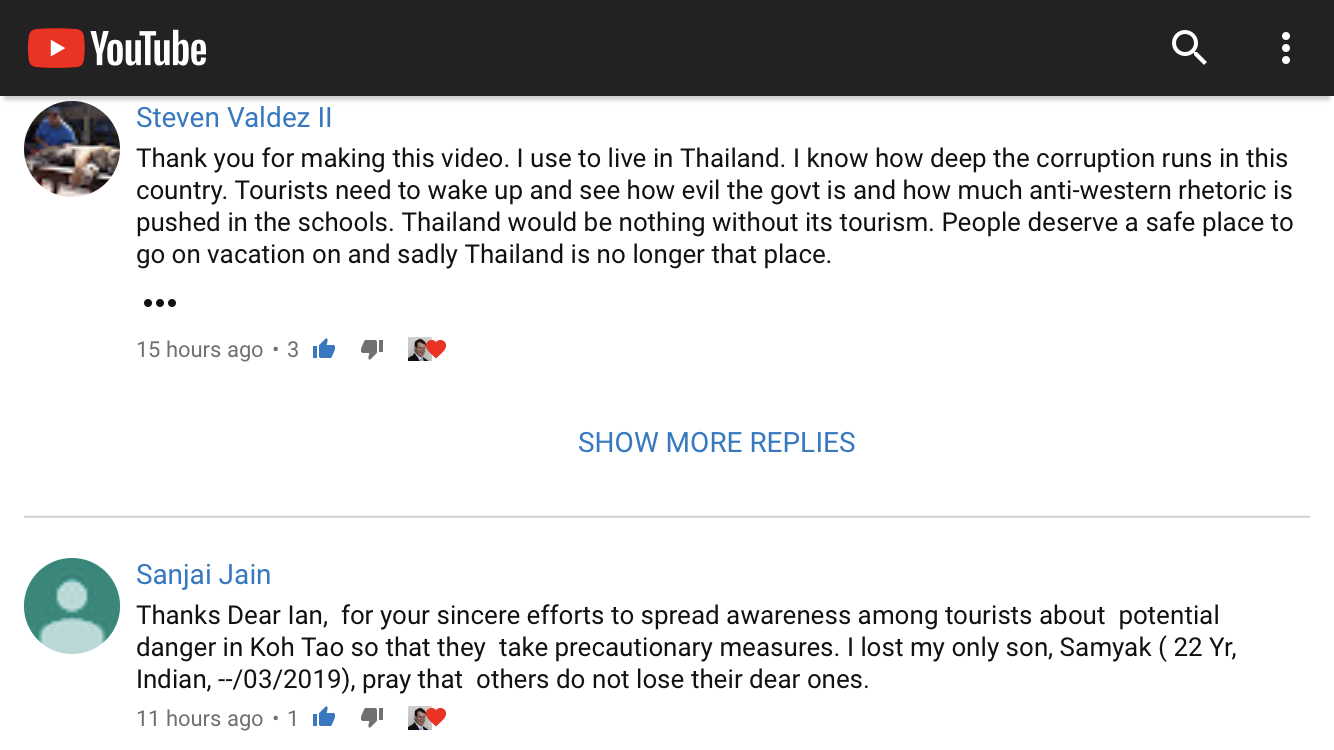 The other notable comment that appeared beneath my recent YouTube video came from the father of Samyak Choudhary. In March 2019, Samyak drowned in extremely strange circumstances. His body was kept alive for about 4 days but the incident caused brain death so his life support system was eventually turned off.
Top

I stopped going to Thailand when I realized the 'smiles' are actually shit-eating grins because, as a foreigner, I was being ripped off by one the most racist (in general) people in the world.
You could be next.
Top
Post Reply Previous topicNext topic
18 posts