Blue Diamond Affair: The mystery of the stolen Saudi jewels

Blue Diamond Affair: The mystery of the stolen Saudi jewels

Interesting read; This would make a great movie


Because of the "Blue Diamond Affair" Thais were prohibited from visiting Saudi Arabia for a generation and the number of Thai workers in Saudi Arabia declined from nearly a quarter million to only 10,000, costing the Thai economy an estimated $500-700 million US $6 billion (200 billion Thai baht) over 20 years in lost remittances from Thai workers. Thai-Saudi relations have yet to recover.

The New York Times once called it "the biggest scandal in the history of the Thai national police." 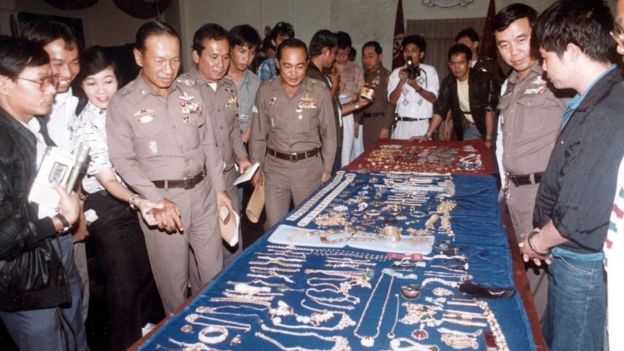 Thai police display some of the jewels they recovered, with Kriangkrai in handcuffs on the right


The theft of precious jewels from a Saudi palace in 1989 set off a chain of killings and a diplomatic crisis that continues to this day. Now, in a rare interview, the man behind the theft tells his story.
https://www.bbc.com/news/world-asia-49824325

1989 (Jan. 4) - Saleh Abdullah al-Maliki, the third secretary at the Saudi embassy in Bangkok, was shot to death by an unknown gunman while walking to his residence on a Bangkok street. According to the NY Times, "Two factions, the Soldiers of Justice and the Holy War Organization in Hejaz [al-Hijaz Islamic Jihad], have claimed responsibility for the murder of Salah Abdullah al-Maliki." [FDI lists this event as a possible Iranian hit squad murder]

1989 (Feb 1) - Bangkok Post (here) provides this date for some of the murders. This appears to be incorrect.

- Kriangkrai Techamong, a Thai worker steals 200 lbs of jewels from Riyadh palace of Saudi Crown Prince Faisal ibn Abdul Aziz al Saud, the son of King Fahd. Among the stolen gems was a rare blue diamond. The theft amounted to US$20 million.

---- - Kriangkrai packed loot in boxes and sent it to relatives in Thailand by DHL parcel post.

----- - Kriangkrai returns to Thailand and stashes loot at his home in Lampang (in the north of Thailand). Kriangkrai buried some of his loot on the farm and started selling items individually for $30 apiece.

---- - owner of a large Thai jewelery business, Santi Sithanakan, thought to have purchased most of the gems from Kriangkrai.

----- - Al-Besri and the three others- two diplomats (Albahli & Alsaif) and a private citizen (al-Ruwaili) - are assigned by Saudi Arabia to look into the highly publicised Saudi diamond scandal.

1990 (Jan 10) - Kriangkrai arrested in Mae Sot. An investigation led by Police Lieutenant-General Chalor Kerdthes led both to the arrest of Kriangkrai and the recovery of many of the jewels.

1990 (Feb 12) - Last sighting of Saudi businessman Mohammed al-Ruwaili, who is thought to have known who had stolen the jewelry. Mr. al-Ruwaili is seen in a car with Saudi consul Abdullah al-Besri (Note: either this date or this claim about al-Ruwaili "last" being seen in a car with al-Besri must be incorrect.) Clock begins ticking on 20-year "statute of limitations on investigations" into his murder.

1990 (March) - police handed over the jewels to Saudi Arabia in a public ceremony.

1990 - Saudis discover 80% of the returned jewels are fake. The Thai police are the prime suspects.

1990 - Saudis downgrade diplomatic relations with Thailand. They dispatch "a tough-talking, gun-toting" charge d'affairs, Mohammed Said Khoja, to Thailand to retrieve the family jewels. Khoja believes that the man responsible for the imitations is jeweler Santi. 'He is the one who changed the genuine stones for the fakes,' he says. 'He is the key.' Concerning the killings, "Khoja will not go into details, but says all four were in some way involved with the attempt to regain the jewels, and claims that they were killed because they had important information. A Thai policeman was also killed. The police denied that the murder was linked with the jewels but they promised to step up their investigations."

------ - "Saudis became convinced that the Thai police were involved in a huge cover-up, that the jewels had been distributed among some influential people at the top of Thai society."

----- - "At a gala dinner in Bangkok soon after the incident, wives of the Thai generals and leading politicians fiercely competed in showing off their jewelry. The Thai newspapers' photographers caught pictures showing diamond necklaces belonging to the Saudi royal family. The pictures were shown to Saudi officials who also confirmed its similarity. The Thai ladies, however, denied their authenticity." (Another?) sighting of the jewels is alleged to have occured at a Red Cross event (date unspecified).

1991 (Jun) - "after unrelenting pressure from Riyadh, the Thai police reopened the case, miraculously discovered some of the jewels - albeit a fraction of the total hoard - and charged four civilians with receiving stolen property. Jewels worth pounds 75,000 were returned."

1994 (Aug) - Santi Sithanakan is kidnapped and tortured by police on orders of Chalor.

----- - The witness, Bangkok jeweler Santi Sithanakan, goes into hiding. He is believed to have tried to pay a randsom for his family, but obviously something went wrong.

---- (Sep) - two police generals (of the 18 police officers implicated in the gems case) are dismissed.

1994 - The thief, Kriangkrai Techamong, is free. "He was released after serving two years and seven months for handling stolen goods after receiving two royal pardons."

1995 - 13 year-long trial of Chalor Kerdthes begins. Initially he is convicted of ordering the murder of the wife and son of the gem dealer in Aug 1994. He is sentenced to death (but the sentence is not carried out). It is revealed that four men admitted committing the murders on police orders. They had demanded a ransom of $2.5 million from the jeweler.

2001 - Police Lieutenant-General Chalor Kerdthes, still in jail, has formed a rock group and produced his own version of Jailhouse Rock. He claims to be innocent.

2002 - "Police Lieutenant-General Chalor Kerdthes, 64, the man charged with investigating the theft by the migrant worker and with returning the jewels to their owner, Prince Faisal bin Abdul Raish, was jailed for seven years, the newspaper reported. Major Thanee Sridokaub, 45, received the same sentence. Both were found guilty of kidnapping a Thai jeweler who was handling the stolen gems.Chalor faces further charges of collaborating in the murder of the jeweler's wife and 14-year-old son after a ransom demand of $2.5 million was not met, the newspaper reported. Instead of attempting to solve the case, Thai police saw riches in it for themselves, the criminal court in Bangkok had been told."

2004 - The Department of Special Investigations (DSI) which is under the Justice Ministry, takes over investigation into the Saudi murders from the Thai police.DIS

2007 (Sep) - new DSI team of investigators launched. It is under Army Colonel Piyawat Gingkaet. No former police have been appointed to the team.

2008 (Mar) - Foreign minister Noppadon declares Thailand's intention to normalize relations with Saudi Arabia, which will be possible once the Blue Diamond case is wrapped up.

---- (Mar) - "Two Muslim experts" who have a good relationship with Saudi Arabia appointed to serve as advisors to DSI investigators in charge of the cases.

---- (Apr) - Thai Justice minister Sompong Amornwiwat visits Chalor Kerdthes in jail. It was suspected that he could implicate some former police chiefs.

---- (May) - Kriangkrai -- the thief -- is now living in a small wooden house. It's not entirely clear where he got the money to buy a new tractor.

---- (fall?) - SDI Director Thawee reports that 90 percent of the investigation has been completed.

2009 (Jan) - Thai charge d'affaires to Saudi Arabia speaks of "renewed effort" by Abhisit government to "normalize diplomatic relations with Saudi Arabia by resolving the Blue Diamond theft case, the murder of three Saudi diplomats in 1989 and the case of the disappearance of a Saudi businessman in 1990."

---- (Aug) - SDI decides there is enough evidence to charge Abu Ali who is suspected of shooting Abdullah AAl-Besri, the first of three Saudi diplomats shot to death on Feb 1, 1990.

2010 (Jan 10) - Office of the Attorney General (OAG) indictes Somkid Boonthanom, chief Police Region 5, plus 4 active and former police officers in connection with the disappearance of Mohammad al-Ruwaili, presumed dead since 1990.
2010 (Feb 12) - The statute of limitations expires on investigations into the killings.

_________
Sources: Wikipedia, NY Times, TVNZ, 2Thailand, Economist, Thailand q and a, Bangkok Post, Diamond Timelines, The Nation, Zawya, Independent, JCK Online, Teak Door, Seattle Times, Death Penalty News, Gulf Times, Digital Journal, MCOT.net, APMRN
In a nation run by swine, all pigs are upward-mobile and the rest of us are fucked until we can put our acts together: not necessarily to win, but mainly to keep from losing completely. HST
Top
Post Reply Previous topicNext topic
1 post • Page 1 of 1

Users browsing this forum: No registered users and 195 guests