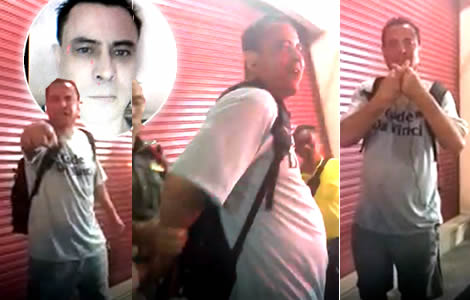 ‘I drink to destroy you’. I’m a real mother fucker,’

A US national was arrested by police on November 5th and charged with criminal damage but not before he created an outrageous public scene in which he racially insulted the Thai people and onlookers in front of him claiming to be a killer and a rapist.

It is reported that the man has been harassing a small restaurant owner in Chiang Mai, Salita Akaruean, with verbal insults, taunts and threats of violence.

On Novembers 5th last, the Thai woman posted a video of the man in action as he hurled a stream of venomous abuse at her and other members of the public before he was eventually arrested by Thai police. The video attached to this report has had to have its audio edited to mute many of the man’s obscene and offensive comments.He was arrested after he damaged a glass mirror in front of the shop.

At one point, he addressed the woman as a ‘coward chick bitch’ and consistently voiced racial put-downs to his audience accompanied by attempts to spit at them. ‘I don’t drink to be happy,’ he said ‘I drink to destroy you.’

The American also has a record of interaction with police in the United States. An arrest record from the Bismarck Police Department in the US state of North Dakota shows that he was arrested in the early hours of the 7th July 2017.

The American also appeared to be perspiring heavily during his rant causing some to speculate that he may have taken some sort of illicit narcotics. It is understood that the incident occurred at the Chiang Mai restaurant at 8 pm.

Days after, the American posted on Facebook where he goes under the name of Daniel Park living in the San Sai area of Chiang Mai, that he is a ‘runaway scientist’ working for the American government.

Describing himself as an American government VIP, he talks about developing his inner ‘evil genius’ and in reply to one Facebook member points out that he was arrested 3 times in 9 weeks but has been released on each occasion.

He also repeatedly referenced coded numbers and the Da Vinci code which was emblazoned on his shirt during his most recent disturbance captured on video.

full https://www.thaiexaminer.com/thai-news- ... ant-crazy/
The idea that seeing the world is going from place to place to look at obvious things is an illusion natural to dull minds.
Top

Great performance when he appears in court and his lawyer pleads not guilty for reason of temp insanity.
In a nation run by swine, all pigs are upward-mobile and the rest of us are fucked until we can put our acts together: not necessarily to win, but mainly to keep from losing completely. HST
Top

Perspiring heavily is normal for farangs in hot climate though. Even in good mood.
Top
Post Reply Previous topicNext topic
6 posts • Page 1 of 1