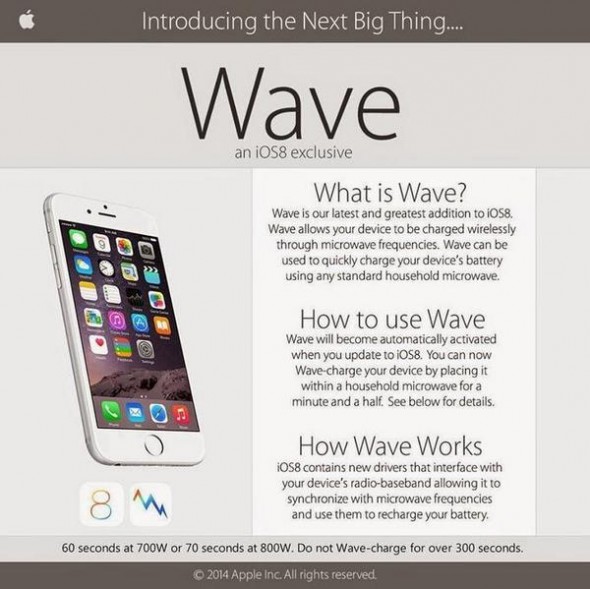 The iOS 8 update brings a number of cool new features to Apple devices, but one thing it most certainly does not do is enable wireless charging via a microwave. Why is that something that ever needs to be said? Because someone made an Apple-style graphic explaining the benefits of “Wave,” a fake technology that lets you charge an iPhone by popping it in the microwave.

According to the graphic, Wave sucks in power from the microwave radiation used by the appliance to cook food. This marvel of fake technology works by loading updated radio baseband drivers that “synchronize with the microwave’s frequencies” to charge the phone. If you’re wondering how long to Wave charge the phone, it’s 60 seconds at 700W or 70 seconds at 800W (this looks like a mistake). Don’t charge it for more than 300 seconds, though–then you might have a problem. It sounds just plausible enough that someone unfamiliar with technology could fall for it. The image itself is done in usual Apple style.

Surely no one would fall for this really, right? Well, I would direct your attention to the iOS 7 rollout when the waterproof iPhone hoax caused some number of people drop their phones in water. Again, that hoax graphic looked just enough like something Apple would make to trick people who weren’t well-versed in how modern technology works. It almost goes without saying, but a software update won’t change the fundamental nature of your phone’s hardware.

Both fake features probably gained traction because they speak to a desire iPhone users have. They would like a waterproof phone or one that charges wirelessly, so they want to believe. The magical Apple software update is like a dream come true!
Roasting your phone in a microwave will almost certainly kill it in a few seconds. Putting metal in a microwave is a bad idea all the time — doubly so when you paid hundreds of dollars for that chunk of metal.


It's a bit sad people fall for this.

It's an iPhone, no one will get sad

Now I understand. I'm tech support for Apple and had someone call in a couple days ago saying she "accidentally" put her phone in the microwave... hahaha

now i would like to introduce you about Genie Cambida
Genie provides a platform and service, which enables consumers to explore and discover the market around them. Genie also enables businesses to navigate the market place with ease, providing direct comprehensive information and connection.
Available on the App Store :https://itunes.apple.com/us/app/genie-c ... 36031?mt=8

You should see the faces of people with broken computer components when I tell them as a last resort to put it in the oven (with plastic removed). I have fixed so many motherboards and graphics cards with this method. Gotta love primitive methods for melting joints.

Then we have the other classic. Broken hard drives go in the freezer.
Top

Or get slammed flat onto a hard surface.
Bodge: This ain't Kansas, and the neighbours ate Toto!
Top

^ I didn't know you were a computer tech Stroppy....I have trouble finding the on off switch....
I was born with nothing , and I still have most of it left.

Milord wrote:... technology that lets you charge an iPhone by popping it in the microwave.

I'm old skool. None of this fancy new microwave technology for me. I still charge my cell phones by grilling them on the barbie.

General Chatter wrote:^ I didn't know you were a computer tech Stroppy....I have trouble finding the on off switch....

It's been a hobby, just something I tinker with.
Bodge: This ain't Kansas, and the neighbours ate Toto!
Top
Post Reply Previous topicNext topic
12 posts