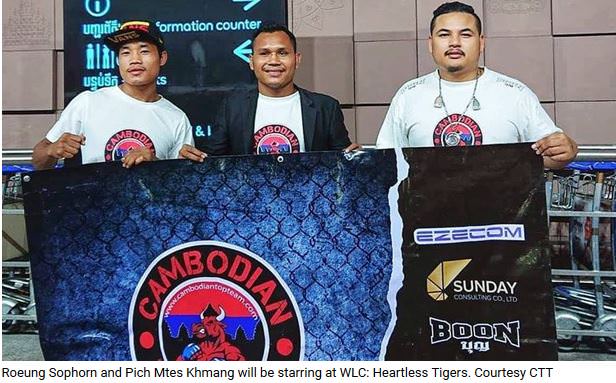 World Lethwei Championship to make US debut later this year, talks ongoing with ‘familiar names in MMA’
WLC is the leading lethwei organization in the world and are looking to broaden their audience over the coming year.
By Bloody Elbow - 1 February 2020

In full: https://www.bloodyelbow.com/2020/1/30/2 ... -muay-thai
Cambodia Expats Online: Bringing you breaking news from Cambodia before you read it anywhere else!

The first event is set for August 4 in Yangon, Myanmar, following the previous show produced in January. It precedes the organization’s debut in Phnom Penh, Cambodia, which is now penciled for September 18, after the original date of April 3 was postponed due to coronavirus (COVID-19) pandemic.
In full: https://www.fightmag.com.au/2020/06/12/ ... scheduled/
Cambodia Expats Online: Bringing you breaking news from Cambodia before you read it anywhere else!

June 30, 2020
World Lethwei C’ship in Cambodia slated for Sept 18
The World Lethwei Championship (WLC), the organisation behind the development and promotion of Lethwei, has released the new schedule for its ‘big event’ in Cambodia.

According to the WLC, the World Lethwei Championship will be held in Phnom Penh this coming September 18, more than five months after its original schedule.

This is good news for many fans, who have long waited for Lethwei to finally set foot in Cambodia.

Martial arts are among the most popular sports here. Cambodians often follow, not only Bokator, Kun Khmer and other home-grown martial arts, but also foreign competitions like Universal Fighting Championship (UFC) and One Championship.

“We look forward to working with the local Kun Khmer community and putting on exciting shows for our Cambodian fans,” Gerald Ng, the CEO of WLC, said.

The Cambodia edition of the World Lethwei Championship was originally scheduled for April 3, but its organisers decided against pushing through with the event at that time because of the coronavirus outbreak that swept through the Kingdom and other parts of the world.

If the event pushes through, this will mark the first time the World Lethwei Championship is to be held outside of Myanmar.

The Cambodia event is part of a growing number of events that WLC is planning to hold inside and outside of Myanmar to promote the ancient Burmese martial art.

In Lethwei, fighters compete bare-knuckled and are allowed to use punches, head-butts, elbows, kicks, throws, clinching and other forms of attack to subdue their opponents. This lead to the sport being dubbed as the ‘most brutal martial art in the world’.
https://www.khmertimeskh.com/50739649/w ... r-sept-18/
Cambodia Expats Online: Bringing you breaking news from Cambodia before you read it anywhere else!

would love to go to the BKK events in Jan, but I doubt travel will be possible by than
Top
Post Reply Previous topicNext topic
5 posts • Page 1 of 1