I’d like to hear your pre-war and 80’s / 90’s post-war Cambodia travel experiences. Here’s mine.

Do you have a Cambodian trip report you want to share? Post it here, and feel free to link to your blog if it's a travel blog for Cambodia, South East Asia, or anywhere really. You can ask and answer questions about travel advice in Cambodia or just share your pictures and videos with us. Most people who live in or visit Cambodia have also checked out nearby countries like Vietnam, Thailand, Laos, Myanmar, Malaysia, Indonesia and the Philippines, and you can get to most of these countries by traveling overland, so put any travel plans, reviews or questions here. Discussions about dirt bike trails in here as well.
Post Reply Previous topicNext topic
4 posts • Page 1 of 1

I’d like to hear your pre-war and 80’s / 90’s post-war Cambodia travel experiences. Here’s mine.

I started backpacking Asia in ’81, loved it, and while home read every Asia book I could get my hands on. Clearly Angkor would be the real jewel, and I tried to get there for years. In the mid 80’s I learned of Orbit Travel in Australia organized tours to Laos, Cambodia, and Vietnam. (I think they must have had some really good connections with a ministry or two in Saigon.) They arrange all your visas, which otherwise were basically impossible, and all the journeys were by air of course. But they were very expensive and really I wanted to do it on my own, or with a buddy.

Back then I think Cambodia just had 5 or 6 embassies in the world and one was in Vientiane. So I figured I’d start by trying for a Lao visa, then show up at the Cambodian embassy and give it my best shot.

Just getting into Lao was hard in the 80’s. Their embassy in BKK had tourism posters on the walls but visas weren’t issued. I tried to finagle the short ferry crossing to Vientiane from Nong Khai a couple of times but everyone said no. Finally in 1990 I tried a little travel agency near the Malaysia Hotel in BKK (still there, I think!) and the gal said “maybe". She dialed the embassy, and I’ll never forget hearing her side of the call. She reached a guy she apparently knew, and spent about 10 minutes flirting and chit-chatting. After warming him up she casually said something like “Oh by the way, I have a couple of farangs that want to see Lao. Can you help me get them visas for them?” It worked, bless her heart. So we flew to VTN, stayed at the Russian built hotel, and had had a blast there. The Cambo embassy was on a dirt lane, outside of town, pretty much in the middle of nowhere. They gave us a warm reception over tea and biscuits. After making introductions our meeting turned into a rather formal interview in French, our only common language. My friend Nick explained our deep cultural interest in the country and strong desire to visit. The official said it might be possible, and had us fill out some very roughly printed applications. He said our applications would have to be approved in Saigon and that could take months. But we were thrilled there was even a chance of going. We took his phone number and after getting back to the U.S. phoned periodically (not easy back then!), always conversing in French. After a few months, on the 3rd or 4th call, the gentleman told us our visas had been approved. We only had to return to the VTN embassy to collect them. He would help arrange a tour for us, booked with the government travel agency.

So in Feb. 91, with the help once again of the flirty Thai travel agent, we were back at the Cambodian embassy, and everything was arranged. The next week we flew from VTN to REP, with a stopover in Pakxe.I must mention that Pakxe airport had outhouse type toilets that were the filthiest places I’d ever seen, though that would change the following week. (And that's saying a lot, because I’d recently spent 6 months in India.) I think I have photos of the grisly inside, somewhere. All part of the travel experience, right?

The low flying prop plane more or less followed the Mekong river which was thrilling, as was our first look at the massive Tonle Sap. I think we were the only farangs on the plane. The other passengers seemed to be diplomats, ministers, and high ranking family members. After landing, a driver met us and took us into town. Siem Reap did not look war torn but it was empty, simple, and dusty. We checked into an older, colonial looking 3 or 4 story hotel near the town center -- I wish I could remember its name, and I wonder if it's is still there. There might have been 1 or 2 other guests. At night we always heard shelling in the distance.

Out Angkor tour started the next morning. We were driven around in an old jeep, “guarded" by a guy with a machine gun. What an incredible thrill to set foot into Angkor after all that anticipation! There were clouds of bats all over, which seem to be gone now. (Maybe exterminated by the local authorities in more recent years? I know that guano had been damaging the carvings.) We saw one other foreigner there, a photographer from Taiwan, and that was it. No Cambodian visitors though some kids were running around, and we’d see the occasional vendor. At the time, an Indian team was doing restoration work on the towers, and had set up scaffolding around them. They kindly let me climb up to the top, which gave unique view of the complex. Yes, I took photos.

We saw many priceless artifacts just scattered around, laying in the dirt. I suppose they’re all in other countries now. You know those thick knit wool hats with the pic keyed brims that Cambodian women wear? Nearly every woman and girl had one and they were all purple. Maybe a shipment had come in from someplace. Of course, happiness was not in the air. Everyone seemed shell shocked, blank, frightened. People were courteous and friendly with us of course but there was an overpowering feeling of sadness with nearly everyone we met, except for the very young kids. But Angkor and surrounds were everything we’d hoped for, and more.

We next flew to Phnom Penh. It was a bit chilling to see the Russian Market, Royal Palace, and other landmarks knowing the city had lain empty during the KR time. Thew Chroy Changvar bridge had a big open gap amid the span. If I’m not mistaken, it had been in that condition for almost 20 years. My buddy and I explored the supports at one end, which were now the biggest, most hideous open-air toilet you could ever imagine.

We saw a classical dance performance and met young students who were learning to revive the tradition. There were other small signs of hope but man, Phnom Penh was a bleak place then. Of course we were taken to Tuol Sleng and the Killing Fields site. The KR had left about 12 years prior, but the city was still devastated.

We were only in Cambodia for 5 or 6 days but I’ll never forget the experience. Rather than flying back to Vientiane we asked our guides to organize visas and a car to Saigon, which they did on short notice. The drive was memorable and we arrived there at the start of the Tet Festival which was a great surprise for us, and tremendously exciting. But that’s another story.

Now I’m an expat based in Chiang Mai. I’ve been back to Cambodia twice.I entered by boat via the 4000 Islands in 2005, and am on my third trip now, spending a week in Siem Reap and making day trips to places that I hadn’t seen before. (My first day at Angkor, making the rounds by bicycle, I was amazed by the lack of crowds, and found myself alone much of the time. (Thanks, covid!) I don’t need to tell you how much different it is here. I’m a littler bummed to see that the fast food chains have moved in (shades of Chiang Mai!), but glad to see that happiness is truly in the air.

I’d include some photos, but they're all back at my place in the States. Maybe I can add some later.

If you were here at some point between the 60’s and early 90’s, please chime in. I’d love to hear your recollections.
Top

Seems like you could tell more than 1 story, nice 1 David... iv been lucky I guess being born in 84.... since a young ish age travel has been easy and frequent... although I never found Asia until 07.... before then was all the party shitholes around Europe, but time spent in good company of great friends.... so not too many complaints.

Great story, the 70's- 80's were a great time to be travelling in SE Asia and Asia
a bit after the hippie trail stopped ( when Afghanistan closed its borders in 79)
I feel sad at times when i look back at the time when I flew into Bangkok in '75 and never headed north or east but back to the states after 14 months on the road from Amsterdam

If ur ever down south, i'm back in Phuket and would love to meet up for a reminisce.
In a nation run by swine, all pigs are upward-mobile and the rest of us are fucked until we can put our acts together: not necessarily to win, but mainly to keep from losing completely. HST
Top

I'm back in the U.S. for a while and have been going through souvenirs and videos from the '91 Cambodia trip, which has been fun.

There's a lot of Angkor footage. In all of them, it's amazing how quiet the place was at the time. I think we encountered 2 other foreigners during our 3 day stay and the only other people there were kids running around playing, some workers involved in restoration, and a few soldiers. Watching the old videos, about the only sounds are birds and on the roads, the occasional bicycle.

I couldn't help but notice that at the gates that the roads pass through, most of the head figures at the approaches are there, and in reasonable condition. Of course almost all are gone now, so that means they went missing between '91 (by which the government had "secured" Angkor, and I suppose the early 2000's. I wonder who took them, and under what circumstances.

Here are photos of a few things from my files that caught my eye 22 years later... 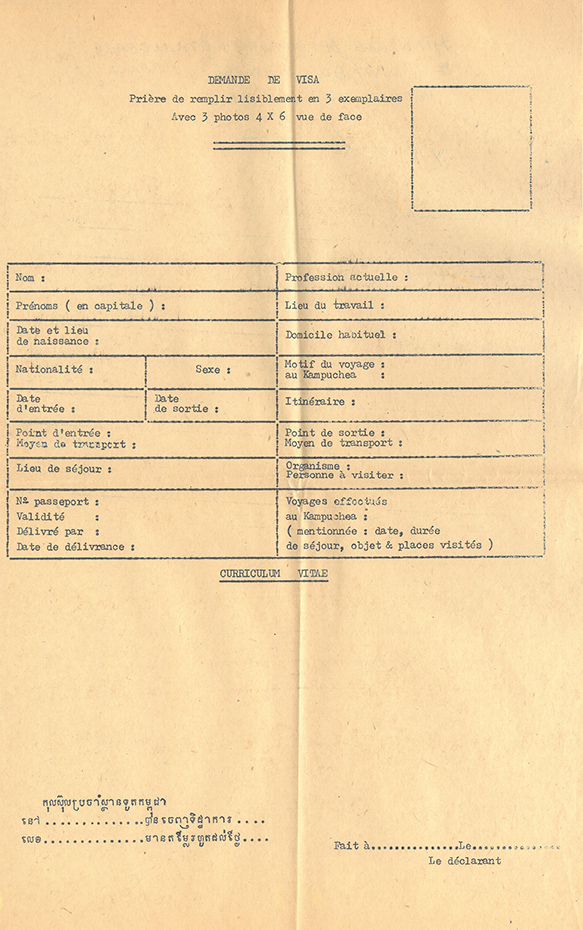 An extra copy of the visa app from the Vientiane embassy that hung onto. 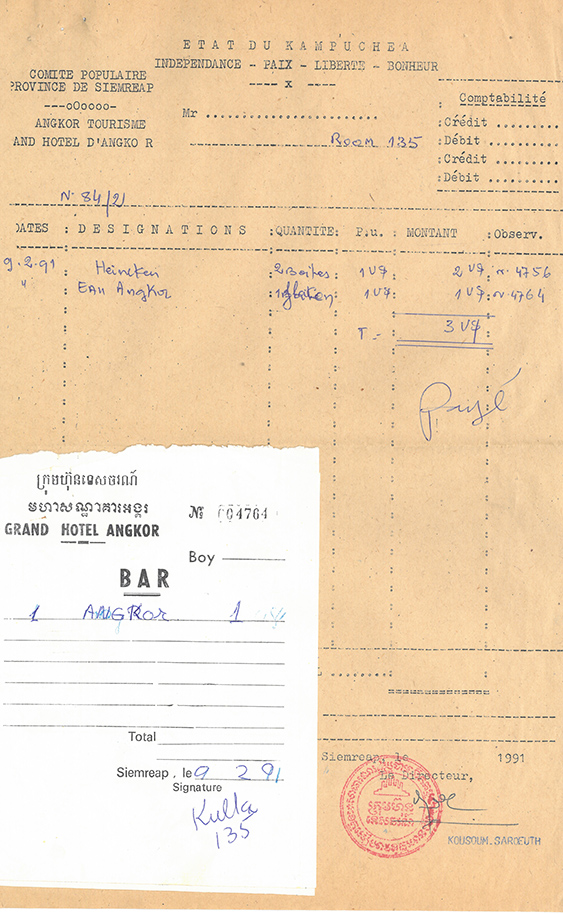 Receipt for a couple of beers from the Siem Reap Grand Hotel. (It was in pretty rough shape back then. Now it's the SR Sofitel and presumably has been renovated.) 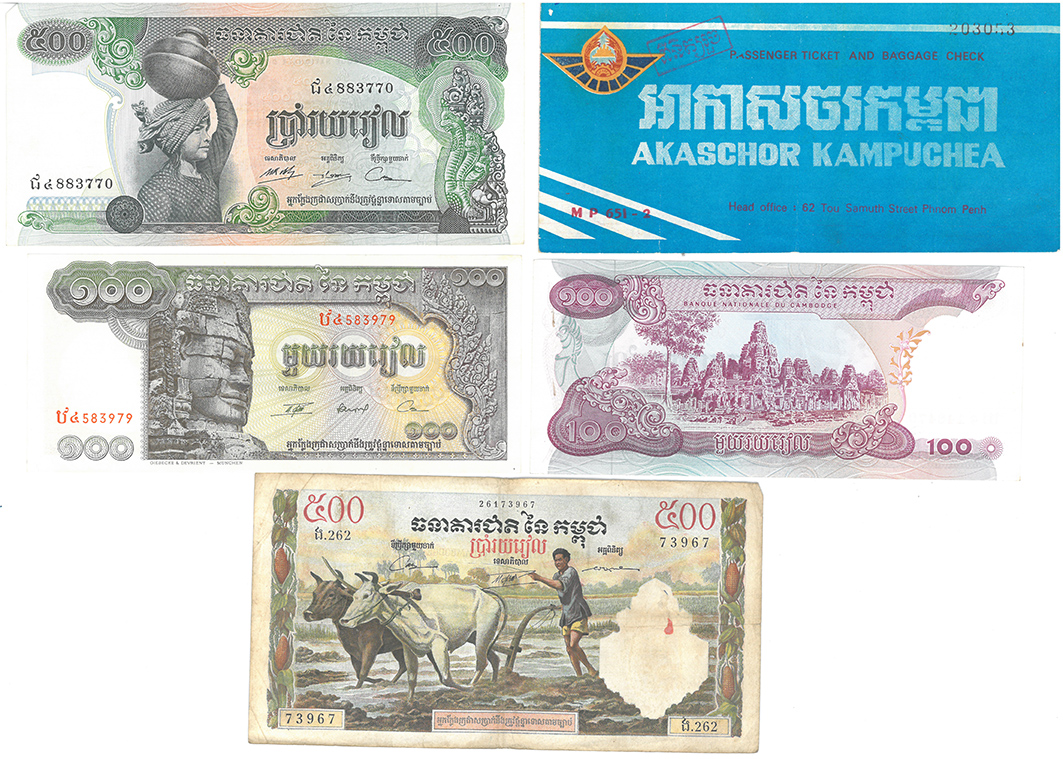 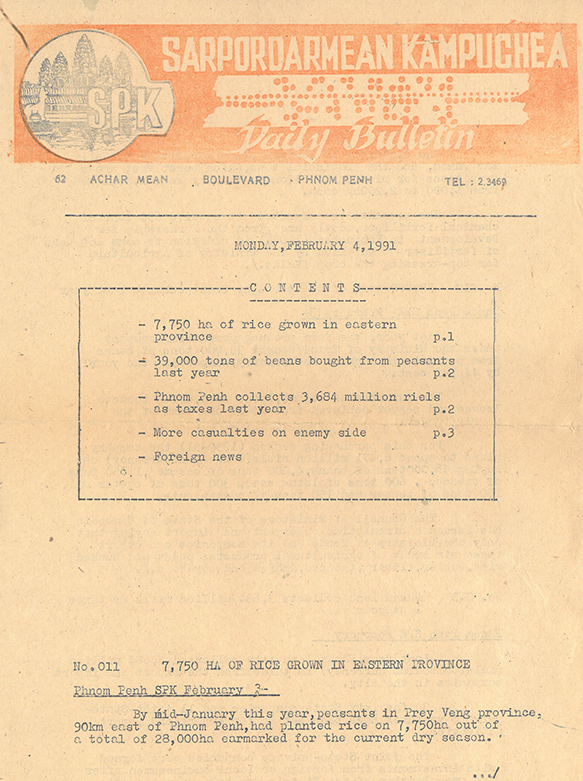 Users browsing this forum: No registered users and 43 guests