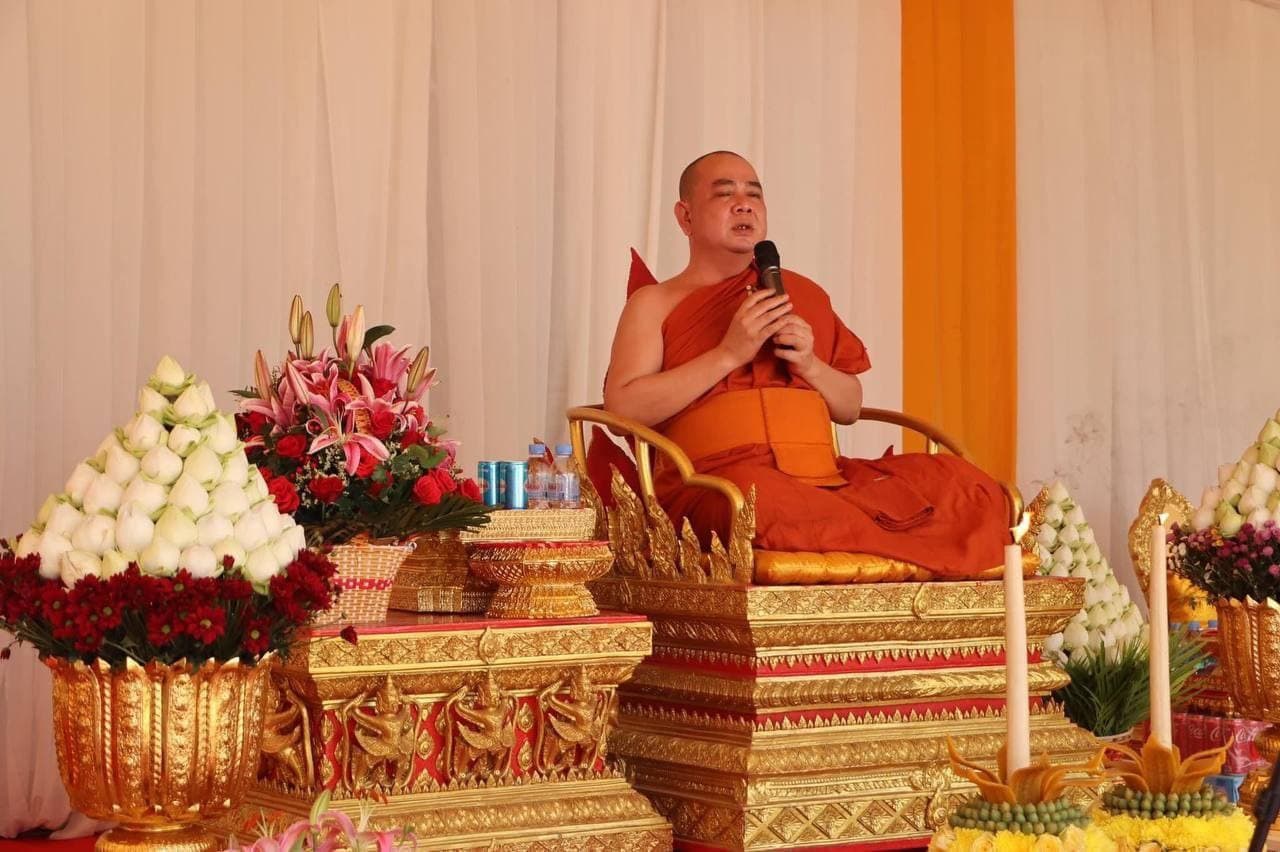 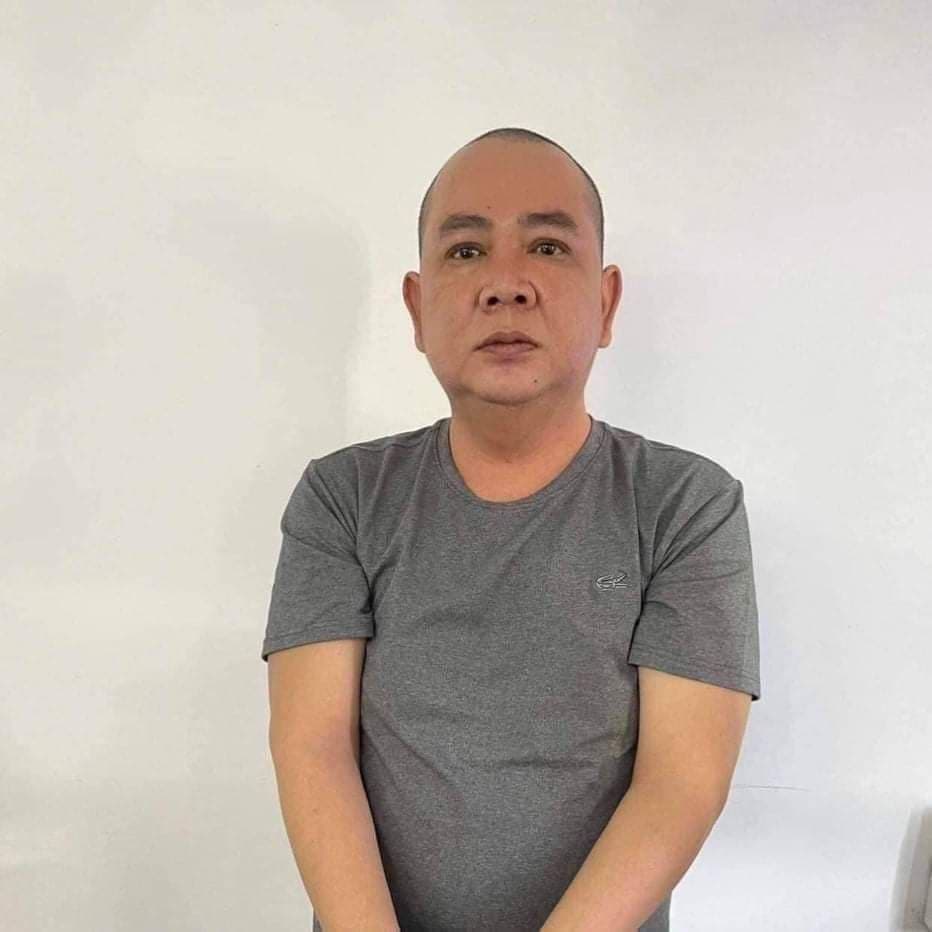 According to Ms. Oknha Sieng Chanheng's complaint, the former monk Pouy Metta is accused of "public defamation, forgery of a seal, forgery of public documents, usage of forged public documents and incitement to cause discrimination and unrest." This complaint is connected to a pagoda land dispute and protests by monks against Mrs. Oknha Sieng Chanheng.

The former monk, who is held responsible for the unrest, must therefore present himself at the Central Security Department of the Ministry of Interior before 3 February 2022. 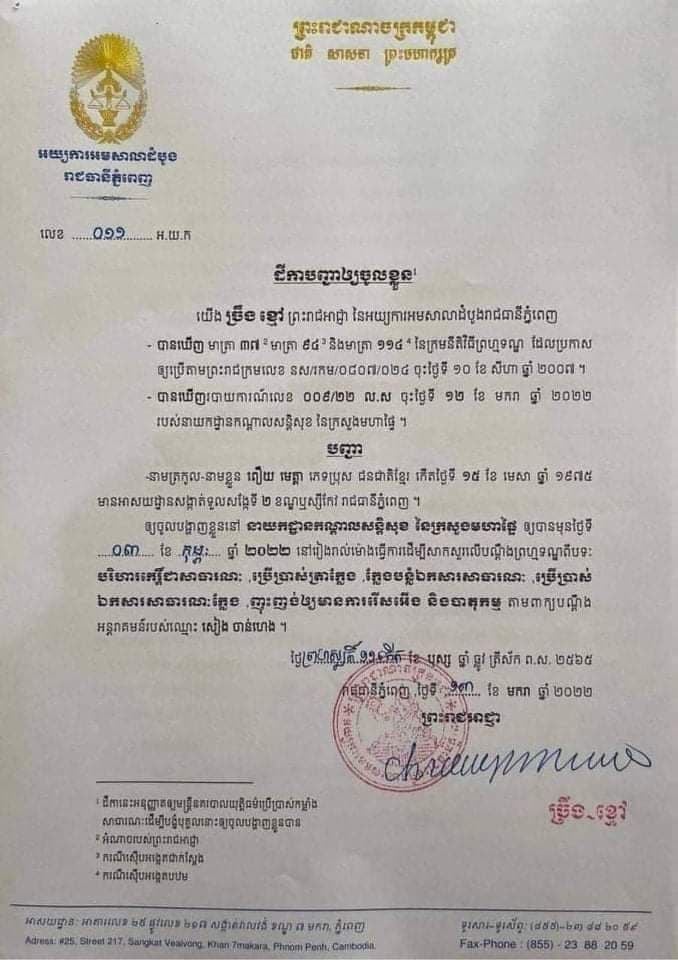 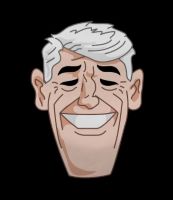 Defrocked from one pic to the next.
Top

Cambodian police have arrested a monk, who has been defrocked and charged with defaming tycoon Sieng Chanheng by claiming she had confiscated a plot of land in Japan which was to be used for construction of a Khmer pagoda.

According to the government-friendly Khmer Times, a Phnom Penh Municipal Court prosecutor identified Poeuy Metta, 47, former chief of Barameykirikhemara Phnombeydathom Pagoda in Japan, for defaming Sieng Chanheng and inciting people to discriminate against her.

It quoted Major Keo Sambath, a police officer working with the Interior Ministry’s Internal Security Department, as saying Poeuy Metta was arrested on Jan. 14 in accordance with a court warrant.

Poeuy Metta was charged with public defamation, use of a forged stamp, forging a public document, using a forged public document, incitement to discriminate and demonstrate. He faces a jail term of between five and 10 years if convicted.

Sieng Chanheng owns Heng Development Co. Ltd. and according to the Khmer Times is one of the strongest financial supporters of Buddhism in Cambodia.

Keo Sambath said Poeuy Metta had managed eight Khmer pagodas in Thailand, the United States, India, Nepal and Japan and had been in conflict with Sieng Chanheng over the Japanese plot since it was acquired in 2017.

He said that on Dec. 9 Poeuy Metta organized about 100 Buddhist monks to demonstrate in front of her residence in Takhmao city, south of Phnom Penh, where he alleged she had interfered with religion and the monkhood, causing divisions among the clergy.

“He was arrested after he was defrocked and expelled from the pagoda where he was staying,” Keo Sambath said, adding Poeuy Metta had asked for US$800,000 in compensation.

In response to the allegations, Sieng Chanheng said that in 2017 she bought a plot of land in Japan to build a Khmer pagoda for Buddhist monks or followers living in Japan.

She said she handed over the land to Venerable Tep Vong, great supreme patriarch of the Mohanikaya Sect, or to the government’s Cults and Religion Ministry, through Poeuy Metta who was staying in Japan at the time.
https://www.ucanews.com/news/cambodian- ... coon/95766#
Cambodia Expats Online: Bringing you breaking news from Cambodia before you read it anywhere else!