Have questions or resources regarding Khmer Culture? This forum is all about the Kingdom of Cambodia's culture. Khmer language, Cambodian weddings, French influence, Cambodian architecture, Cambodian politics, Khmer customs, etc? This is the place. Living in Cambodia can cause you to experience a whole new level of culture shock, so feel free to talk about all things related to the Khmer people, and their traditions. And if you want something in Khmer script translated into English, you will probably find what you need.
Post Reply Previous topicNext topic
26 posts

WASHINGTON DC — Cirque du Cambodia, a documentary film about two young Cambodian circus performers, is set to have its world premiere on Oct. 21 at the United Nations Association Film Festival. The film is available for anyone in California to register to screen online for free as part of the festival's educational programming.

The 90-minute documentary took eight years to film in four countries. Filmmaker Joel Gershon said it’s a story of two young Cambodian teenagers from a rural village in Cambodia, whose lives have been changed after they attended a “social circus” movement at the Phare Ponleu Selpak school located in Battambang.

“The school teaches arts to at-risk youths from challenging backgrounds, and these programs give kids the chance at a better life. It builds community, confidence, self-esteem, creativity, empathy and makes them good social citizens,” said Gershon in an email to VOA Khmer.

“The film follows two young men Dina Sok and Sopha Nem over 8 years as these talented young men win full scholarships to the National Circus School of Montreal to train for their dream of becoming a member of Cirque du Soleil,” Gershon stated.

Sopha and Dina first started at Phare Ponleu Selpak, a non-government organization, a home and a place of hope for thousands of vulnerable children who have social and financial problems in their families.

The pair had a chance to study and work at Phare as they grew up. They were talented and fast learners which led to them being admitted to study in Montreal, according to Dara Huot, chief executive officer at Phare Performing Social Enterprise.

“Sopha and Dina were just 16 and 17 when they went to Canada. They have shown their admirable talents. They are fast learners. They worked hard and were willing to learn. Therefore, their teachers recognized their ability and talent and encouraged them to show their talent through videos. We then sent the videos to the National Circus School of Montreal in Canada.”

Cirque du Cambodia, according to the filmmaker, will also have a global virtual screening on Nov. 20 UN World Children’s Day, as a benefit for Phare Ponleu Selpak school and the two stars of the film.
https://www.voacambodia.com/a/documenta ... 24756.html
Cambodia Expats Online: Bringing you breaking news from Cambodia before you read it anywhere else!

From Phare, The Cambodian Circus facebook page; as an entertainment center, they have been closed down until further notice, following the latest Covid-19 government restrictions. 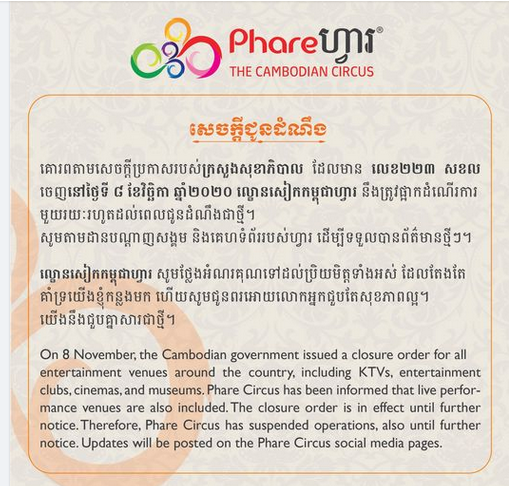 I went to a show a few years ago and the entire show looked like it was choreographed for a bar in Bangkok’s Silom Gay town. Nothing but gays in spandex tights spreading their legs and putting their assholes in my face. A bit disappointing to say the least! But I can see why the gay crowd is so into it.

It was a really exceptional show called “Sokha.” Later went and watched the one called “Khmer Metal.” Both shows were exceptional and entertaining.
Top

I went there in a past life, many years ago. Cirque du Soleil it is not. There were some mess ups and a couple of falls during the show.

But for who they are, at risk street kids starting from scratch, they were amazing.

Hopefully after the world recovers, they will open back up again.
Top

The making of "Cirque du Cambodia" is also an underdog tale about the indefatigable human spirit and its will to succeed against all odds. Produced, directed, narrated and financed by Joel Gershon, an adjunct professor of media studies at the American University School of Communications in Washington, D.C., "Cirque du Cambodia" took nearly a decade to transform from an idea to finished product.

"Cirque du Cambodia" was born in 2011 when Gershon, then a freelance journalist, filmmaker and media lecturer based in Bangkok, took a trip to neighboring Cambodia. After visiting Phnom Penh and the Angkor Wat archaeological park, he stopped at the northwestern city of Battambang. There he chanced upon Phare Ponleu Selpak (Brightness of the Arts), a vocational school for disadvantaged youths, founded by former refugees from the Khmer Rouge, which runs Cambodia's top circus.

"I saw a bunch of village kids put on the most amazing artistic interpretation of the Cambodian genocide," Gershon recalls. "The performance was top notch and there was an emotional beauty to it. You could feel what they were expressing -- it was quite extraordinary. I thought it was one of the greatest things I had ever seen and wanted to share their story."

Full article: https://asia.nikkei.com/Life-Arts/Arts/ ... he-big-top
Cambodia Expats Online: Bringing you breaking news from Cambodia before you read it anywhere else!

Under the bright lights of the circus tent, Kong Tida moves with captivating grace, every gesture unfolding with deliberation. He is excited to perform in front of an audience but he knows, his days in this circus may be numbered.

Phare could be described as Cambodia's answer to Cirque du Soleil. But Phare is more than a circus. Often called the "Circus of Hope," it trains destitute children to become top-class circus performers.

And each performer has a story to tell. Drawn from among the country's beggars, orphans, victims of human trafficking and drug addicts, they have honed their skills and found new purpose in life.

"Our families, all artists are from difficult family situations," Kong Tida said. "It was difficult when I was young. My parents had to take care of us all, and I had many siblings. It was difficult to survive and find food."

Kong Tida was 12 years old when he joined Phare. He, like many of the performers, was born to a poor family in Battambang Province. He spent his childhood scavenging for junk to sell. Performing with Phare, he was able to support his entire family and siblings.

For years, he performed to sold-out shows. Phare became one of the biggest attractions in Siem Reap. That was until the COVID-19 pandemic struck. Tourist arrivals slowed to a trickle and then stopped altogether as the audiences stopped coming. Phare found itself walking a tightrope, wobbling between hope and despair as it counted the emotional and financial cost.

"Eighty percent of our income was from the circus, performed by our artists. When our tent falls, it's like eggs in a basket. All the eggs are not safe. We only have enough money reserved until the end of March." Dara Huot, CEO of Phare Performing Social Enterprise, said.

The livelihoods of thousands depend on Phare. It has also been the prime source of funding for more than 1,200 students at an arts school – Phare Ponleu Selpak (PPS) – in Battambang.
https://news.cgtn.com/news/2021-02-22/C ... index.html
Cambodia Expats Online: Bringing you breaking news from Cambodia before you read it anywhere else!