When we all like to come out and play...
Bars, clubs and pubs oh my!
Post Reply Previous topicNext topic
3 posts • Page 1 of 1 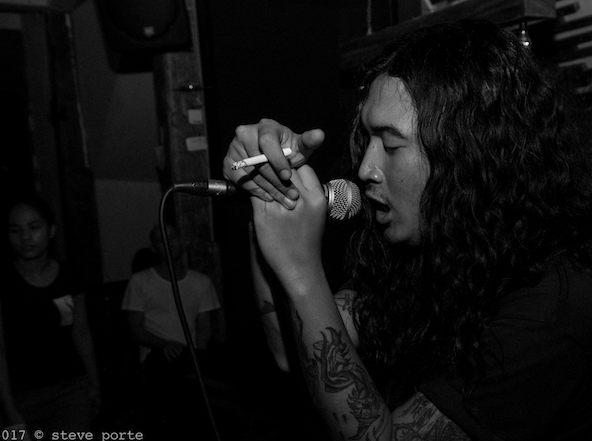 “Alcohol allowed me to be a little bit more out there.... But it also wrecked me pretty badly. Sobering up was long overdue, I just had to do it.

Vanntin Hoeurn, the softly-spoken, loudly-screaming, rock’n’roll-haired front for Sliten6ix, Phnom Skor, The Phnom Devils, Reign in Slumber and Blood Bricks is about to leave Phnom Penh for a new life in Washington State with his fiancé Janelle. This week Leng Pleng caught up with him to discuss music, the past and the future, and the importance of just doing it.

“It started around the end of 2011, when Alan Ou and I got together and started Sliten6ix,” he explains. “I was in first year of university, still in school. We knew many countries had extreme metal, why not Cambodia? So why not start it? So we did. People already had a pre-existing interest, but we took the first step. We knew there were other Khmer people who were listening to metal and punk music, who mostly met on-line. There was a Facebook page called Cambo Headbangers, and we shared music and conversed.”

The very first shows were at house parties organised by Cambo Headbangers, then the big leap into an outside audience was at Sharky Bar. [Then owner, the late] Big Mike and [then manager] David Maybe, they’d never heard of us, but they said: you play metal? Come and play at Sharky’s. It turned out all right. I don’t remember much because I was really nervous. The Cambodian bar staff had never been exposed to that sort of music, and there were some barangs who were more into classic rock – but our friends were there, who knew what we were about, and they went crazy. Everyone else was sort of bemused, confused as to what they were experiencing. We made a point of no clean singing – because I couldn’t sing [laughs] – I’m just going to scream. It’s intended that way

The next big step was finding Show Box, an alternative rock’n’roll youth culture bar in the Tuol Sleng district. “I remember Myles Rattle reaching out to us, probably around 2012 – come to Show Box, set up, no pay but an open bar. So lots of vodka Red Bull was consumed. After that gig the place became my home. Show Box was very counter-culture. Now we’ve got Cloud in a similar sort of space, but it’s cleaner, less prone to contracting COVID, no rats [laughs].

Now there’s one more leap, into the Pacific Northwest of the USA. “I’m going through mixed emotions. I’m excited, but I’m also a little melancholic as well. Living in another country has always been my dream, and it’s time to experience new things. Nobody likes where you were born and raised, you hate your own city and you move away, but I’m noticing stuff a little bit more. I just sold my bike as well, so now I’m either walking or taking tuk tuks – oh wow, I’ve seen this before, but not quite like this! I’m sad to leave friends and family, especially my mother.”

full https://lengpleng.com/?p=13591&lang=en_GB
The idea that seeing the world is going from place to place to look at obvious things is an illusion natural to dull minds.
Top

Wonderful story. Thanks for sharing!
Once you've read the dictionary, every other book is just a remix.
Top

Deleted because maybe I'm not as funny as I think I am. Probably that!
The idea that seeing the world is going from place to place to look at obvious things is an illusion natural to dull minds.
Top
Post Reply Previous topicNext topic
3 posts • Page 1 of 1