The desertion of Cambodia’s spirits

The desertion of Cambodia’s spirits 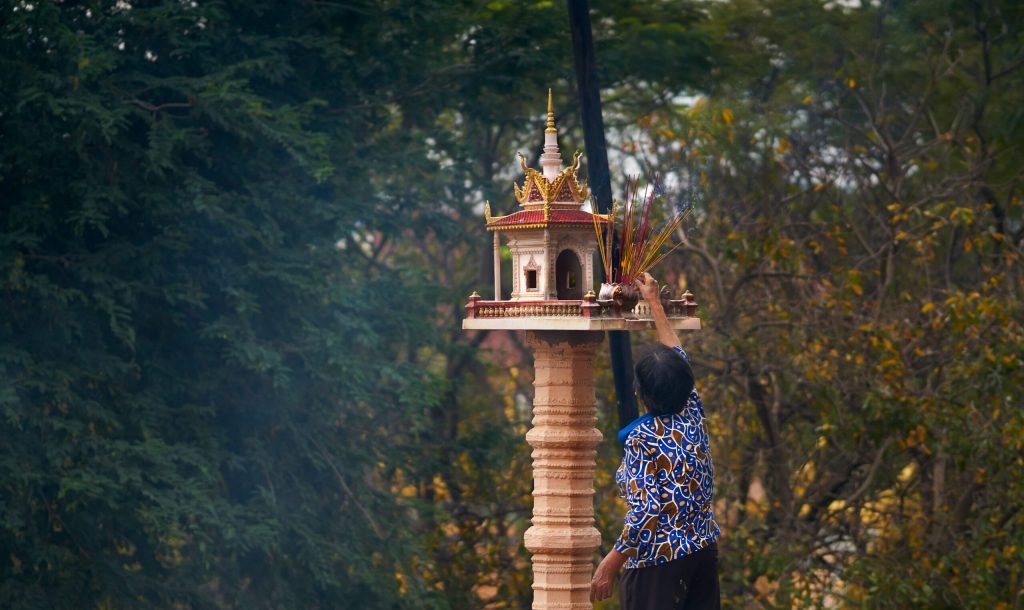 When I asked forest dwelling people in Mondulkiri province where the spirits of the great trees go once the trees have been felled, they told me they move to another tree.

When Theravada Buddhism spread throughout Cambodia in the 13th century, it subsumed but did not eclipse pre-existing spirit worshipping practices. Despite the cultural divergence between the lowland Khmer majority and highland minority groups, they continued sharing a concern for the spirits controlling the resources on which they depended. In this cosmological system, the power of the source of all life—generally known as the maja tuk maja day (literally owner of the water and land)—manifested in specific forms, such as rivers, mountains, trees, rocks, great ancient trees, peculiarly shaped rock formations, termite stacks, wooden linga and more. The term neak ta (or lok ta) is used to refer to these spirit forms. A neak ta may appear in the form of phenomena such as tutelary spirits that protect specific communities, or as human ancestors and deceased heroes.

These spirits articulate a variety of relationships: relations between people within the community, relations between the living and the dead, and relations between people and the environment—particularly when it comes to resource utilisation. Traditionally, when treated with respect, the neak ta responded by protecting and providing for communities and their members. However, when neglected or when the environment they ‘owned’ was transgressed, they could respond in wrath, striking people down with illness, flooding or depriving communities of rainfall and therefore food, withholding game animals during hunts, causing accidents, sterility and all manner of misfortune.

The government paid no heed to scientific or international expertise. While dam construction works continued apace, desperate members of local communities, who stood to lose everything, beseeched their local neak ta for assistance. They recalled the power of their guardian spirit, who had successfully protected the village from US bombs during the 1970s. In 2010, when the villagers first learned of the plans to construct a dam, they implored the neak ta to intervene on their behalf. They offered to sacrifice three water buffalo within five years in exchange for his protection.

A third example comes from Preah Vihear Province, where Jonas Kramp conducted a study in 2017 concerning a conflict between ethnic Kui villagers and five Chinese concessionaire companies, all subsidiaries of the Hengfu Group Sugar Industry Company. The deforestation of large swathes of land and takeover of villagers’ farmland to plant sugarcane was leaving local farmers destitute. Oppression by local authorities was also making it difficult for the communities to organise themselves and act in solidarity. Activists gathered in smaller groups, setting up protest camps and, importantly, building a new spirit house to worship the neak ta of the area.

The only recourse left for the villagers in this case seemed to be to appeal to their spirits to curse the Chinese companies, the local authorities and people who sold out to the companies to ‘become homeless ghosts and to die for seven generations’. Recent developments suggest that perhaps this is having some material effect since in mid-2020, the Hengfu Sugar Company’s subsidiaries all had to cease operations indefinitely on account of numerous irregularities.

Among rural people in Cambodia, there has therefore long been an understanding that greed and unrestrained exploitation of the environment will incur reprisals. If we abandon the powers that rightfully own and protect the treasures of the water and land, they too will abandon us. This worldview dovetails now with that of climatologists and environmentalists worldwide who are regularly presenting evidence of the way that the planet is irrevocably succumbing to human plundering.

full.https://www.newmandala.org/the-desertio ... s-spirits/
The idea that seeing the world is going from place to place to look at obvious things is an illusion natural to dull minds.
Top
Post Reply Previous topicNext topic
1 post • Page 1 of 1