Philippine police officer killed by rooster while breaking up cockfight

Philippine police officer killed by rooster while breaking up cockfight 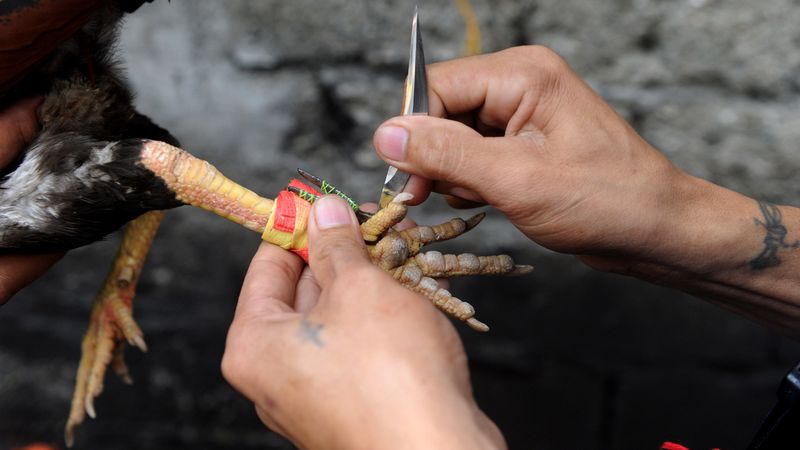 A rooster is fitted with a razor sharp blade as villagers engage in a cockfighting in a make shift arena as part of the town's annual "fiesta" celebrations in Barangay San Roque outside Manila on August 10, 2014. Cockfighting is hugely popular in the Philippines where large amounts of money are wagered on battles between roosters. (AFP via Getty Images)

The gaff hit Bolok's femoral artery as he was confiscating the bird, police said.

A police officer has been killed by a rooster while attempting to break up an illegal cockfight in the Philippines, authorities said.
Police in the Northern Samar province said Lieutenant Christian Bolok was struck by the rooster's gaff - a metal blade attached to the bird for a fight.

The gaff hit Bolok's femoral artery as he was confiscating the bird, police said.

"He was rushed to the provincial hospital but was pronounced dead on arrival due to heavy blood loss," officer's said.

There is a long history of both legal and illegal cockfighting in the Philippines, but the sport was banned in the region in August after it was found to have been a source of COVID-19 infections.

Illegal cockfights in the country are known as "tupada" and often operate in underground locations to avoid detection by authorities.

"I have a heavy heart as we have lost a brother who sacrificed his own life in the name of service," Northern Samar police provincial director Arnel Apud said in a statement sent to the government-run Philippines News Agency.

"The (Philippine National Police) grieves the untimely death of Lt. Bolok and extends its deepest sympathy to his family and relatives."

Three people were arrested at the event and three more suspects were identified but remain at large after escaping the raid, the Philippines News Agency reported.

Bolok's police force posted images from a memorial service held for the officer on Wednesday.

https://www.9news.com.au/national/phili ... 9b7280b37f
The idea that seeing the world is going from place to place to look at obvious things is an illusion natural to dull minds.
Top

Re: Philippine police officer killed by rooster while breaking up cockfight

Christ, what an unfortunate chap.

Killed by a chicken and Bolok for a surname.
Top

Re: Philippine police officer killed by rooster while breaking up cockfight

Killed by a chicken and Bolok for a surname.

Karma , :
... imagine how bad he was to deserve that ( from god if you believe that BS )
พิซออนเดอรูฟ
Top
Post Reply Previous topicNext topic
3 posts • Page 1 of 1