Understanding the History of Cambodian-Thai Relations 1950-2020

Understanding the History of Cambodian-Thai Relations 1950-2020 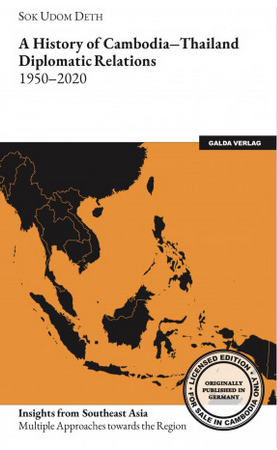 Sharing insights from his new book, “The History of Cambodia-Thailand Diplomatic Relations from 1950 to 2020”, associate professor of International Relations and Rector of Paragon International University Deth Sok Udam sheds light on how the relationship between the neighboring countries has evolved.

Sao Phal Niseiy: Weighing in at 231 pages, you have covered the history of Cambodia and Thailand’s diplomatic relations extensively, could you tell us what it covers in a nutshell?

Deth Sok Udom: This book is actually a revised and updated version of my doctoral dissertation on Cambodian-Thai diplomatic relations, completed in 2014. As the current title suggests, the book also covers recent developments during the past six years, since the coup that ousted Yingluck’s government in May 2014.

This book aims to provide an analysis of Cambodia-Thailand diplomatic relations over the past seven decades, specifically from 1950 to 2020. While other academic publications have focused on particular aspects of Cambodian-Thai relations—notably the border conflicts or the cultural ties—this book is the first to cover a comprehensive history of diplomatic relations between the two countries starting from the establishment of official diplomatic ties in 1950 to the present.

Sao Phal Niseiy: This book is a product of your 10 year-long writing and research on the ties between the two neighboring countries with a long history of love-hate relationships. What do you think is the most significant part of your new book?

Deth Sok Udom: In addition to empirical discussion, the book seeks to explain why Cambodian- Thai relationships have fluctuated and what primary factors caused the shifts during the period discussed.

In doing so, it employs the “social conflict” analysis, which views states not as unitary actors, but within which are comprised of different societal forces competing with one another and pursues foreign policies in accordance with their own ideology, interest, and strategy.

As such, it is postulated that Cambodia-Thailand diplomatic relations should not be seen simply as relations between two unitary states cooperating with or securitizing against one another, but rather as a matrix of intertwining relationships between various social and political groups in both states harboring competing ideologies and/or interests to advance their power positions at home.
Full interview: https://cambodianess.com/article/unders ... d-conflict
Cambodia Expats Online: Bringing you breaking news from Cambodia before you read it anywhere else!

Looks very interesting. (especially if your home is near the border)

Unfortunately, most historical material i have read about Kh - Foreign relations, written by Cambodians, has been far too influenced by the famously extreme Khmer nationalism.
Add party political line on top of that.

Open mind tho'...
Any new serious scholarship by Cambodians is a step in the right direction.
Top

SternAAlbifrons wrote: ↑Thu Oct 15, 2020 5:08 pm Unfortunately, most historical material i have read about Kh - Foreign relations, written by Cambodians, has been far too influenced by the famously extreme Khmer nationalism.
Add party political line on top of that.

Deth Sok Udom has been writing fairly balanced studies for years. His dissertation that was used for this book is easy to get on Academia or one of those sites.
Silence, exile, and cunning.
Top

SternAAlbifrons wrote: ↑Thu Oct 15, 2020 5:08 pm Unfortunately, most historical material i have read about Kh - Foreign relations, written by Cambodians, has been far too influenced by the famously extreme Khmer nationalism.
Add party political line on top of that.

Deth Sok Udom has been writing fairly balanced studies for years. His dissertation that was used for this book is easy to get on Academia or one of those sites.

Just from what I read there, he doesn't sound overly nationalist. Later in the interview Deth Sok Udom says:


"Accordingly, this book is the first major attempt to present a comprehensive empirical study of Cambodia-Thailand relations since the post-World War II period to the present by incorporating past and recent scholarships on Cambodian-Thai foreign affairs. It also offers an alternative and, I would argue, more useful theoretical framework for analyzing Cambodian–Thai relations. As such, it is also hoped that this book contributes further as a case study to the broader scholarships on border conflict studies, nationalism in international relations, and foreign policy analysis.


In the policy arena, understanding our own and the other side’s histories help us look at things relatively more objectively. Hopefully, lessons from the past—good and bad—would discourage enmity and instead foster cooperation between the two countries. At the end of the day, conflicts only breed further conflicts and losses on both sides. Peaceful cooperation, on the other hand, brings about development and prosperity for all."

I have to confess my reading in this area is related to mostly the debate around Koh Tral, now Phu Quok.
The Brevie Line and all that.
Nearly everything i have seen written about that by Cambodians has been an exercise in bending scholarship to fit the Khmer nationalist dreams.
Top
Post Reply Previous topicNext topic
5 posts • Page 1 of 1