CHONGQING -- Water levels at China's Three Gorges Dam set fresh records on Friday despite a gradual decline in inflows, doing little to assuage concerns of a possible collapse that would affect 400 million residents.

Inflows into the dam, one of the world's largest flood control facilities, declined 5% on Friday. But the water level is still rising because the amount of water discharged has also been cut back to limit flooding downstream. And with another round of torrential rain along the Yangtze River basin feared on Sunday, authorities remain on high alert.

In the winter, when rainfall is light, water is allowed to accumulate to a maximum of 175 meters for efficient transportation and power generation. During the summer, the limit is set at 145 meters to more effectively control flooding during the rainy season. The current water level is far above that, at 166 meters.

The growing burden on the dam has spurred talk of a potential failure that would have disastrous consequences.

When the water level rose during last month's flooding, the dam operator told the Communist Party-affiliated Global Times that there is no risk of deformation or collapse. But if it did burst, the resulting deluge would inundate Shanghai and other cities, affecting more than 400 million people living downstream. 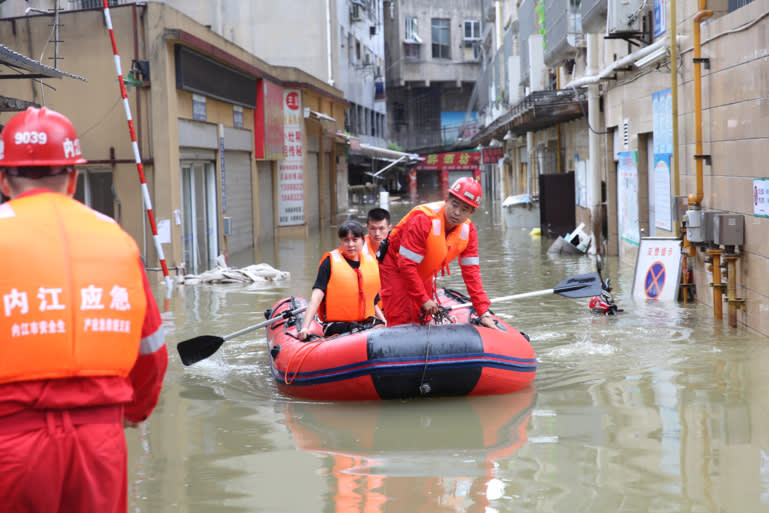 Fears over the dam add to the woes already suffered from several bouts of torrential rain this summer. Flooding in central and southwestern China has already killed hundreds and displaced millions just as the country appeared to be past the worst of the coronavirus pandemic.

The 185-meter-high, 2.3-km-wide Three Gorges Dam has a reservoir of 39.3 billion cu. meters of water and can generate electricity equivalent to 20 standard nuclear reactors. According to the operator, the facility is the largest hydroelectric power station in the world as well as the top flood control structure in terms of capacity.

The dam was first proposed in 1919 by Sun Yat-sen, but progress stalled amid the Cultural Revolution.

The National People's Congress finally approved the start of construction in 1992, but with an unusually large number of dissenting votes amid widespread environmental and budgetary concerns about the project. A total of 177 representatives voted against the proposal and 664 abstained, compared with 1,767 votes in favor.

Then-Premier Li Peng, himself a hydroelectric engineer, headed an expert committee on the project and pushed forward with construction, which began in 1994. The dam, which began storing water and generating electricity in 2003, was completed in 2006, and started operating at peak power capacity in 2012. Roughly 1.3 million people were forcibly relocated for the project.
Top

Another environment disaster waiting to happen in the name of never ending progress
I'm standing up, so I must be straight
What's a poor man do when the blues keep following him around.(Smoking Dynamite)
Top

They have releases large amounts of water without telling the people downstream. That is one of the reasons many people have died.
## I thought I knew all the answers, but they changed all the questions. ##
Top
Post Reply Previous topicNext topic
3 posts • Page 1 of 1