Tradition and Fermentation Science of prohok..

Discussions about restaurants, cafes, coffee shops or bars in Cambodia. Feel free to write any reviews you have, whether its the best burger you've had in Phnom Penh or the worse pizza in sihanoukville, we want to read it! Discussions about Khmer dishes are also in here, or you can leave your own. If you own a restaurant, feel free to let the expat community know about it here so that we can come check it out. Found a favorite cafe or have a place we should avoid? Tell us about it. Asian recipes & questions are always welcome.
Post Reply Previous topicNext topic
1 post • Page 1 of 1

Tradition and Fermentation Science of prohok.. 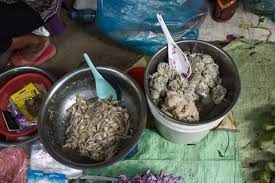 You used to eat it because it's all you have, but now it is a necessity in the culture. It’s always been there.

One notable adaptation to traditional prohok production practices has arisen with the advent of modern modes of transportation. Traditionally, communities coordinated together during the peak fishing season to arrange caravans to the nearest waterway, sometimes 60 km away. Ethnic traditions of many families included traveling in oxcarts, sometimes for a week, to target one of the two-week periods of peak fishing activity that preceded a full moon. Fish would be purchased and processed before families make the return trip home.

Overall, bacterial counts were found to range from 105–107 cfu g-1 and consisted primarily of Gram-positive cocci or rods. Among these bacteria, halophilic and halotolerant bacteria Staphylococcus and Tetragenococcus were primary (estimated at 105–106 cfu g-1). Clostridium was also a major genus observed (105 cfu g-1).

The palate of the Khmer people is so refined they are able to distinguish between many different regional preparations, grades, and qualities of prohok. The different tastes, textures, and aromas are influenced by multiple factors including the method of preservation; different types of additional ingredients such as herbs, fruits, or vegetables; the kinds of microorganisms present during the fermentation; the nutritional status of the fish; the origin of the salt; the types of salt impurities present; and even the surrounding air in the production environment.

full https://journalofethnicfoods.biomedcent ... 019-0027-1
The idea that seeing the world is going from place to place to look at obvious things is an illusion natural to dull minds.
Top
Post Reply Previous topicNext topic
1 post • Page 1 of 1

Users browsing this forum: No registered users and 119 guests