15 December 2017
Even if you live in Phnom Penh and never leave the city, it is still possible that you might come across trafficked wildlife in market stalls, or you may get offered turtles or some delicious (but endangered) wild sambar deer in a local restaurant. You might stay in a guest house where they are keeping an exotic "pet" chained up or in a cage. In that case, what do you do ? And how do you know if the animal is a protected species ?

Today there's a new app which identifies protected wildlife, and also makes it easy to contact the appropriate authorities in Cambodia if you see protected species that are or have been illegally trafficked. Granted, if you see a turtle being served in a restaurant, it will be too late to save it, but if you report it, the restaurant might take turtles off the menu, definitely a good thing in the long run. 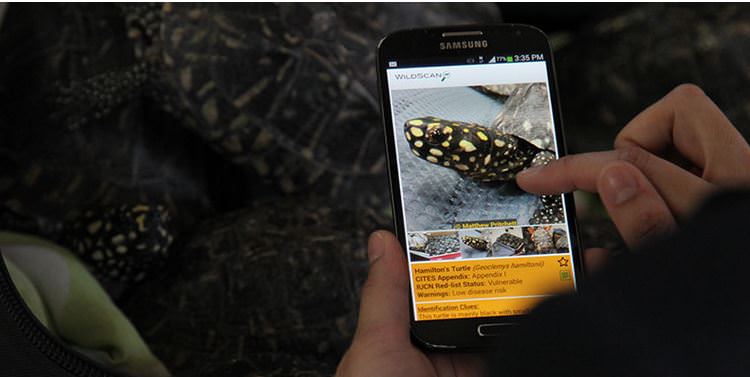 Today we would like to promote a great smartphone app from our friends at Freeland. This is a great way to anonymously report illegal wildlife trafficking and have your report forwarded to the appropriate authorities here in Cambodia. Download the android app here: WildScan
Download available here: https://www.wildlifealliance.org/fight- ... -wildscan/
You can also report by sending a message to Wildlife Crime Hotline – Cambodia who are responsible for all wildlife trafficking in Cambodia.

Tried to download it for android, but it keeps crashing before it's even running. Great app
Top

This has potential. 1k installs is WAY above the usual 12 installs that most $100,000 ngo apps accumulate in their first year after release.
Top

An app like that has been working very well in VN for many years. But this one still has a few bugs.
Top

An app like that has been working very well in VN for many years. But this one still has a few bugs.

Are they a protected species of bug ?
Cambodia,,,, Don't fall in love with her.
Like the spoilt child she is, she will not be happy till she destroys herself from within and breaks your heart.
Top

Public invited to help stop illegal online trading of wildlife
March 03, 2018 10:01
The public is invited to become the eyes and ears of online anti-animal-trading efforts through a social media campaign launched by the Department of National Parks, Wildlife and Plants Conservation (DNP) together with a coalition of conservation NGOs.

This effort builds on the public uproar that followed the recent publicity over the hunting and killing of a highly endangered leopard in Tung Yai Naresuan Wildlife Sanctuary early last month, said a statement issued on Saturday by the group.

The campaign builds on Thailand’s status as a highly digitally literate society. Bangkok is the city with the world’s most Facebook users, pegged at 27 million in 2017. And Thailand also sits in the world’s top 10 countries for social media use and adoption growth.

The effort will share information about some of the most vulnerable species and raise awareness of the DNP’s anonymous hotline number (1362) for reporting potential offences involving illegally traded wildlife.

The campaign launch features a series of social media posts highlighting the six species most commonly illegally owned and traded online through both closed and open social media groups in Thailand.

Each post will invite the public to look online for examples of suspected sales of these species and to report them to the hotline.
http://www.nationmultimedia.com/detail/ ... l/30340090
Top

The problem with the app is it is tied to the provider...if you report a certain nation for wildlife trafficking, and they are of the nationality of the provider, what are your chances of anonymity?
Top