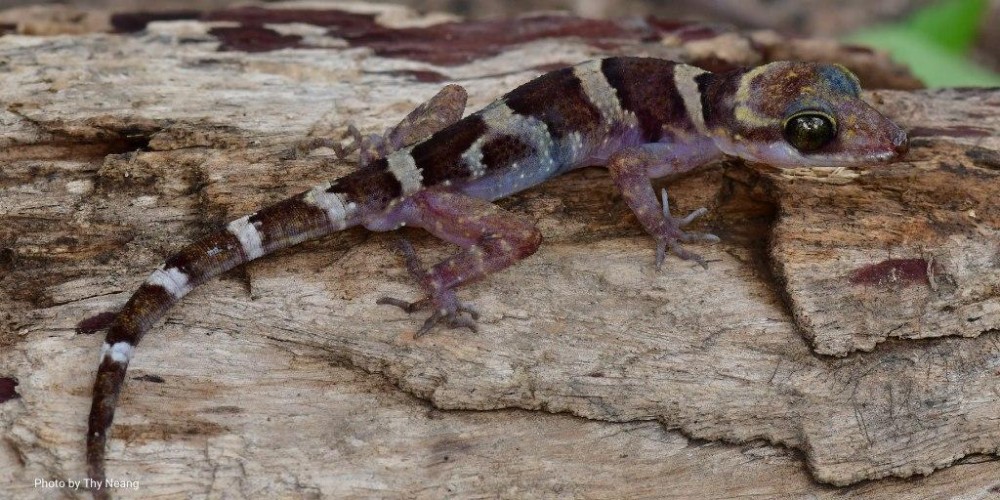 Photo Thy Neang
A new species of bent-toed gecko (Cyrtodactylus phnomchiensis) has been discovered in Cambodia’s Prey Lang Wildlife Sanctuary by Wild Earth Allies Biologist Thy Neang in collaboration with North Carolina Museum of Natural Sciences‘ Herpetologist Bryan Stuart. This new species is described in ZooKeys, according to a press release from Wild Earth Allies.

The discovery was made during Wild Earth Allies field surveys in June-July 2019 on an isolated mountain named Phnom Chi in the Prey Lang Wildlife Sanctuary when he encountered an unusual species of bent-toed gecko. “It was an extremely unexpected discovery. No one thought there were undescribed species in Prey Lang,” said Thy Neang.

The geckos were found to belong to the C. irregularis species complex that includes at least 19 species distributed in southern and central Vietnam, eastern Cambodia, and southern Laos. This is the first member of the complex to be found west of the Mekong River, demonstrating how biogeographic barriers can lead to speciation. Additionally, the geckos were unique in morphological characters and mitochondrial DNA, and distinct from C. ziegleri to which they are most closely related. Researchers have named the species Cyrtodactylus phnomchiensis after Phnom Chi mountain where it was found.
https://www.akp.gov.kh/post/detail/29819
Cambodia Expats Online: Bringing you breaking news from Cambodia before you read it anywhere else!