With no cargo airplanes travelling between Cambodia and South Korea, the fruit must be shipped to its destination.

“We have a lot of experience and technical know-how to send produce by ship. It would take six days to reach the destination and we can maintain the fruit’s freshness,” said Lee.

The first shipment will be a relatively small 10-15 tonnes and the process to receive the South Korean government's approval was not without its challenges.

“It is a very tough process because there are really strict requirements when it comes to importing fruit, especially into South Korea," explained Lee.

“However, everything will go as planned and, after we passed the requirement, this means there is no further problem for us. It can also be a signal to other countries such as China and Japan to export their mangoes,” he said.

Although the exporter received approval, competing with the likes of Vietnam, Thailand, Peru, and the Philippines remains a challenge.

“Vietnam and Thailand have an air cargo connection with South Korea and enjoy a very low cost of transportation,” noted Lee.

“Every day, Thailand sends more than 100 tonnes of mangoes to South Korea and they are dispersed everywhere in one day, while Vietnam’s duties for mango exports are lower than for Cambodia because of the free trade agreement area.”

The facility can process up to 50,000 tonnes of fruit a year, including coconuts, durians and mangosteens.

The Korean firm teamed up with local mango producer Mao Legacy to plant mangoes on 2,400 hectares in the province.
http://www.fruitnet.com/asiafruit/artic ... outh-korea
Cambodia Expats Online: Bringing you breaking news from Cambodia before you read it anywhere else!

Mangoes for China Export
24 October 2019
China will buy half a million tonnes of mango from Cambodia every year for its market if a deal on mango exports to China succeeds next year. 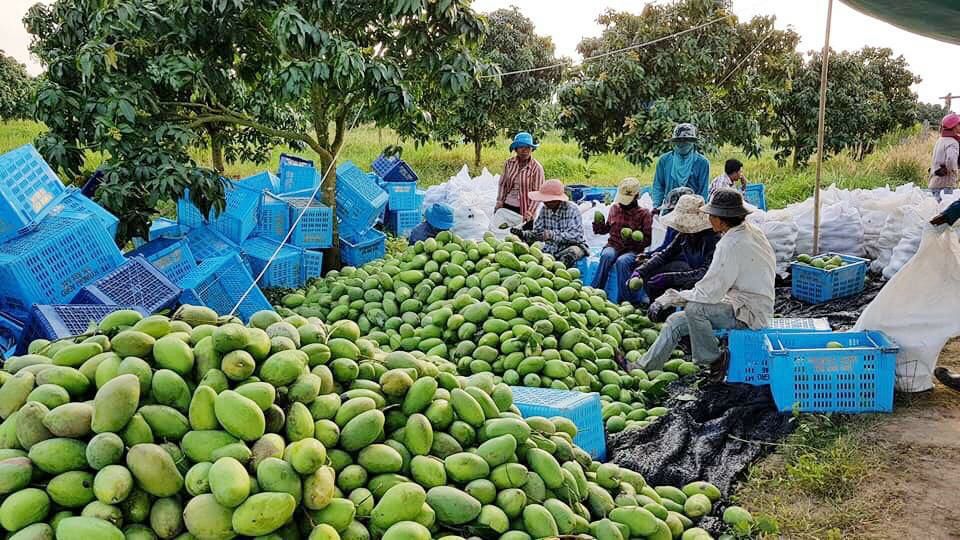 The Chinese Embassy in Cambodia on October 24, 2019 said that if the process is smooth and successful in early 2020, Cambodia and China will sign a joint agreement on exporting more than half a million tonnes of Cambodian mangoes to China every year.

In addition to the mangoes, Cambodia has also asked the Chinese side to expedite the export of some agricultural products such as dragon fruit, coconuts, and chili pepper to China.

According to the Ministry of Agriculture, in the first nine months of this year, Cambodia exported more than 40,000 tonnes of mangoes to markets in Vietnam, France, Germany, the UK, Japan, Singapore, Saudi Arabia, India, Taiwan, Belgium, Thailand, Australia, Switzerland, Canada and Kazakhstan.
Cambodia Expats Online: Bringing you breaking news from Cambodia before you read it anywhere else!

PHNOM PENH--Cambodia is not taking advantage of the promising mango market in China due to its lack of treatment and packaging facilities, a government official said.

During a press conference at the Council of Ministers on Dec. 4, Ngin Chhay, director general of agriculture at the Ministry of Agriculture, Forestry and Fishery, said that Cambodia aims to export 3,000 to 4,000 tons of fresh mangoes to China every day. But the country’s packaging and treatment facilities remain an issue, he said.

“The next stage: The Chinese authorities will inspect and carry out practical assessment of our mango farming plantations to ensure that we comply with safety standards,” Chhay told reporters. “Therefore, in order to export our mangoes to China, we need to set up factories responsible for treating and packaging.”

“If we don’t have those facilities, we won’t be able to export our fresh mangoes,” he added.

According to Chhay, only Hyundai Agro currently runs a mango treatment facility in Cambodia, but it can only treat 25 to 30 tons per day.

And in the meantime, Cambodia’s eight mango factories can handle up to 4 million tons of mangoes, he said.

Chhay said he remains optimistic that Cambodia will be able to export its mangos to China very soon. He added that he would like to encourage domestic and foreign investors to support the opening of mango treatment facilities.

The Cambodian government has considered obtaining access to the Chinese mango market a top priority.

In late November, Chinese agriculture and custom officials conducted an initial inspection of Cambodia’s mango plantations and concluded that mango farming in the country comply with their import standards.

However, Cambodia still has difficulties meeting the sanitary and phytosanitary (SPS) requirements due to the ongoing use of pesticides and bug issues.
https://cambodianess.com/article/cambod ... ngo-market
Cambodia Expats Online: Bringing you breaking news from Cambodia before you read it anywhere else! 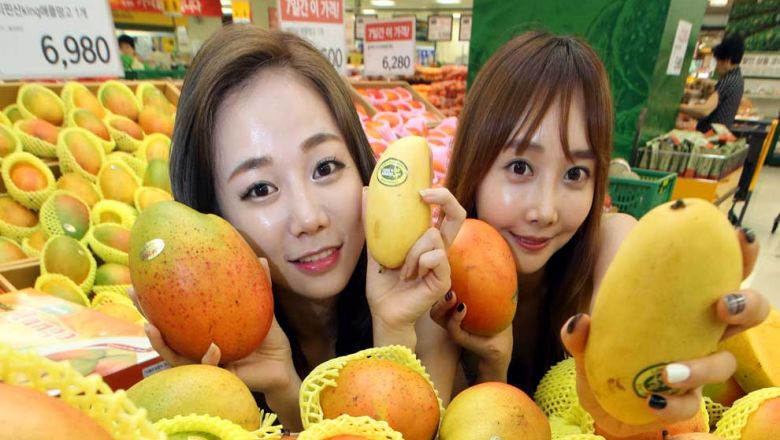 The first shipment of Cambodian mangoes to South Korea will be carried out by Hyundai Mao Legacy Co Ltd on Wednesday. YONHAP NEWS AGENCY

Exports of Cambodian mangoes to South Korea will begin this week after Korean authorities gave the nod.

The Ministry of Agriculture, Forestry and Fisheries’ Department of Plant Protection, Sanitary and Phytosanitary Requirements director Ker Monthivuth told The Post on Sunday that after several inspections of local mango farms, Korea’s Animal and Plant Quarantine Agency greenlighted the shipments.

The first shipment of Cambodian mangoes to the East Asian market will be carried out by Hyundai Mao Legacy Co Ltd on Wednesday, Monthivuth said.

“Initially, the volume of mango exported will probably be less than 10 tonnes. This can be transported by aeroplane. When the market is bigger, the company will probably start shipping by sea,” he said.

Cambodia can also export mangoes to Vietnam and Thailand, with which it has signed the necessary agreements, Monthivuth noted.

He said Cambodia has more than 100,000ha dedicated to growing mango, with a total yield estimated at more than four million tonnes per year.

Hyundai Mao Legacy is a joint venture between South Korea’s giant Hyundai Corporation and local company Mao Legacy. The company was formed in 2016 and grows mangoes on 2,400ha in Kampong Speu province.
https://www.phnompenhpost.com/business/ ... begin-week
Cambodia Expats Online: Bringing you breaking news from Cambodia before you read it anywhere else!

“Fresh mango from Cambodia enjoys a warm welcome in South Korea. This will help attract more South Korean investors to Cambodia, ” he said.

Exports of Cambodian mangoes to South Korea begun in January after Korean authorities approved shipments of the fruit.

“We are looking for partners in South Korea because this market has great potential for Cambodian mango products, ” Sophea said.

The company exports about 180 tonnes of dry mango products per year, mostly to Australia, China, Japan, the Philippines, Thailand, Vietnam, the United Kingdom, and the US.
“On average, the company processes about 60 tonnes of fresh mango per day, ” Sophea said.

According to a report from the ministry, in January and February, Cambodia exported 16,868 tonnes of fresh mangoes to Thailand, Vietnam, France, Russia, South Korea, and Hong Kong.
https://www.thestar.com.my/news/regiona ... outh-korea
Cambodia Expats Online: Bringing you breaking news from Cambodia before you read it anywhere else!

The Agriculture Ministry has instructed local farmers and producers to rethink their mango supply chains, as coronavirus-related economic disruptions have sent the price of the fruit plummeting during peak season.

Mango prices dropped by 60 percent from last year due to reduced orders for export as consumer spending has nosedived amid the Covid-19 pandemic, pushing some mango-processing businesses to temporarily suspend operations, the ministry said in a directive on Friday.

Prices of the fruit fell from 800 riel ($0.20) per kilogram last year to 320 riel ($0.08) per kilogram this month, and orders from processing plants were also down, according to the directive.

To withstand the fall in prices, the ministry ordered provincial and local authorities to work with the private sector and development partners to chart out a production plan, suggesting that stakeholders help connect farmers to new markets or train them to produce higher-value products, like dried mango or syrup.

The directive also asks officials to form collective production groups of farmers and collect data on the cost of mango production so the ministry can create a more specific plan in the future.
https://vodenglish.news/mango-prices-sl ... son-sales/
Cambodia Expats Online: Bringing you breaking news from Cambodia before you read it anywhere else!

The dried mango from Battambang is fantastic. Naturally super sweet without added sugar or preservatives and then pressed into round sheets. Had it once. Since then have searched Phnom Penh for it without any luck.
Top

Cambodia to export 500,000 tonnes of mangoes annually to China
Cambodia News, Phnom Penh: According to the Chinese Embassy in Cambodia, China and Cambodia will officially change the Mango Protocol on June 9, 2020, and will sign a new agreement at the Ministry of Agriculture, Forestry and Fisheries. 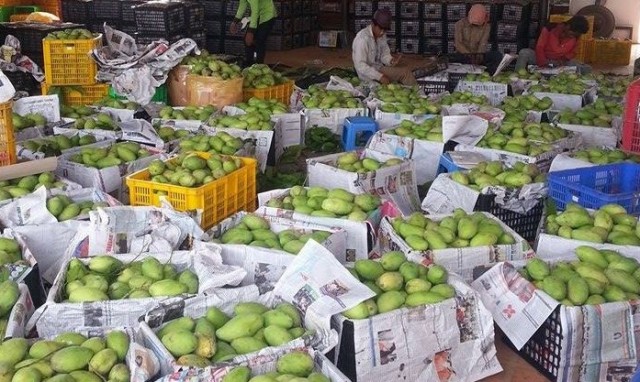 As a result, Cambodia will be able to export 500,000 tonnes of high quality mangoes to the Chinese market every year. The Chinese embassy in Cambodia claimed: “The opening of the Chinese market will enable better agricultural development in Cambodia. ».
Cambodia Expats Online: Bringing you breaking news from Cambodia before you read it anywhere else!