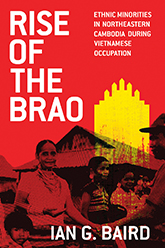 In the early 1970s, the Khmer Rouge had become suspicious of communist Vietnam and began to persecute Cambodian ethnic groups who had ties to the country, including the Brao Amba in the northeast. Many fled north as political refugees, and some joined the Vietnamese effort to depose the Khmer Rouge a few years later. The subsequent ten-year occupation is remembered by many Cambodians as a time of further oppression, but this volume reveals an unexpected dimension of this troubled past. Trusted by the Vietnamese, the Brao were installed in positions of great authority in the new government only to gradually lose their influence when Vietnam withdrew from Cambodia.

Based on detailed research and interviews, Ian G. Baird documents this golden age of the Brao, including the voices of those who are too frequently omitted from official records. Rise of the Brao challenges scholars to look beyond the prevailing historical narratives to consider the nuanced perspectives of peripheral or marginal regions.

“The quality of the scholarship is high. This book makes extensive and skilled use of multiple, repeated, and lengthy interviews with key surviving ethnic minority political figures. Over time, the result of the cultivation of these unique sources has been an increasing degree of candor and provision of detail on the part of those interviewed.”
—Stephen Heder, University of London

“A fine-grained regional history of the Northeastern provinces of Cambodia, in particular Ratanakiri, during the Khmer Rouge and People’s Republic of Kampuchea periods. The book will contribute to a better understanding of the history of Cambodia and the region, and especially the varying and diverse roles of ethnic minorities within larger historical frameworks.”
—Oscar Salemink, University of Copenhagen

https://uwpress.wisc.edu/books/5655.htm
The idea that seeing the world is going from place to place to look at obvious things is an illusion natural to dull minds.
Top
Post Reply Previous topicNext topic
1 post • Page 1 of 1