Trust nature: The best way to defend deltas against rising seas is with sand and mud
WWF
Oct 2 · 5 min read
By Marc Goichot, WWF Freshwater Lead, Greater Mekong
Doubtless it sounds crazy to anyone who has watched a sandcastle crumble as the tide washes in but the key to stopping the world’s densely populated deltas from sinking beneath the waves is sand. Or rather sediment: the combination of gravel, sand, silt and clay that large rivers carry down to the sea and deposit on deltas. Sediment that constantly and naturally replenishes deltas, keeping them — and all the people, fields, industries, cities and wildlife that rely on them — above the water.

While scientifically proven, this surprising fact has struggled to gain much traction outside the small world of geomorphologists — like me. Instead, communities, cities and countries have continued to put their faith in concrete solutions to try and stop floods, salt water intrusions and erosion, and reduce the impact of extreme weather events. But these efforts always end up being little more than short term ‘solutions’ because they are a response to the symptoms, not a cure for the root causes of the crises facing deltas across the world.

So it is extremely significant that last week’s authoritative IPCC Special Report on Oceans and Cryosphere in a Changing Climate (SROCC) specifically refers to the important role river sediment plays in replenishing deltas and counteracting land subsidence. And stabilizing deltas is becoming ever more urgent. The report predicts that hundreds of millions of people in low lying areas could be at risk from climate change, while acknowledging that the ground is already sinking beneath the streets and skyscrapers of many of the mega-cities sprawling across Asian deltas — including Bangkok, Ho Chi Minh City and Shanghai.
Land is sinking beneath the skyscrapers of Ho Chi Minh City, Vietnam © WWF / Greg Funnell

And we know why. The amount of sediment flowing along most major rivers has been drastically reduced over recent decades, trapped behind an ever increasing number of hydropower dams and extracted by accelerating demand for sand and gravel for construction and land reclamation. As with CO2 emissions, there is a lengthy time-lag between changes in sediment supply and the impact on deltas. And also, like CO2 emissions, we might have already unknowingly passed some dangerous thresholds.

So what to do? The answer is to take urgent steps to avoid any further reduction in sediment loads: critically, this means opting for solar and wind projects rather than new hydropower dams on free flowing rivers and ensuring that sand mining is regulated and sustainable.

But surprisingly, the report does not take the obvious next step: recommending that efforts are made to ensure the natural processes of transport and deposition of sediment that underpin the stability of Asia’s deltas — and the societies, economies and ecosystems that depend on them — are protected or restored. Instead, the report falls back on responses that do not measure up to the challenge: more hard infrastructure, moving people away from rapidly eroding shorelines, and expansion of mangrove forests to provide natural protection against storms and sea level rise.

All these have a part to play because the complex crisis facing our deltas requires a concerted, multi-faceted approach. But they are just part of the solution. And they are doomed to failure unless they are supported by sediment flow in rivers. Let’s take just one example: planting mangroves to act as buffers and help coastal areas adapt to climate change. There is no doubt that they improve resilience: the issue is for how long because mangroves have an Achilles Heal. Guess what? Sediment.

Without enough new sediment, mangroves in deltas and estuaries (representing over 60% of all mangroves on earth) cannot thrive, let alone successfully contribute to ‘coastal protection’. The extent to which mangroves can be conserved or replanted fundamentally depends on sediment supply. Many mangrove rehabilitation or restoration projects — often implemented at a considerable cost — unfortunately overlook this fundamental criterion and will therefore fail to achieve their long-term goals.
Full read:
Cambodia Expats Online: Bringing you breaking news from Cambodia before you read it anywhere else!

CEOCambodiaNews wrote: ↑Wed Oct 09, 2019 9:20 pm Trust nature: The best way (abbreviated edition)
sediment: the combination of gravel, sand, silt and clay that large rivers carry down to the sea and deposit on deltas. Sediment...
...Instead, communities, cities and countries have continued to put their faith in concrete
...important role river sediment plays
...sediment flowing along most major rivers has been drastically reduced
...changes in sediment supply
...avoid any further reduction in sediment loads
...ensure the natural processes of transport and deposition of sediment
...expansion of mangrove forests
...unless they are supported by sediment flow in rivers
...planting mangroves
...mangroves have an Achilles Heal. Guess what? Sediment.
Without enough new sediment, mangroves...

mangroves can be conserved...
depends on sediment supply...
Many mangrove rehabilitation or restoration projects.... 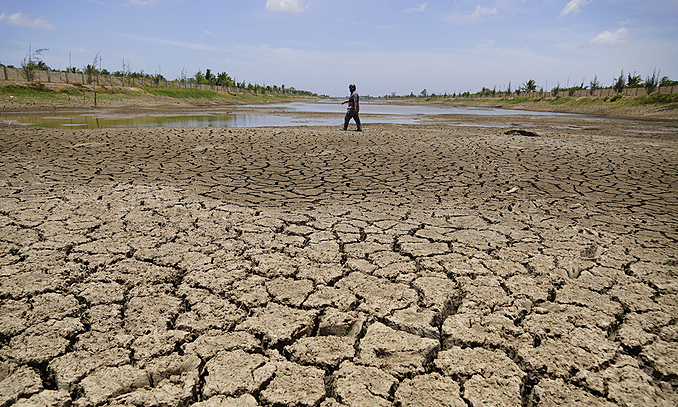 Arguably Vietnam's most fertile region, feted for long as the nation’s granary, the Mekong Delta is now a ghost of its former self.

Perhaps nowhere is this more evident, literally and symbolically, than at the region's largest reservoir, Kenh Lap, in Ben Tre Province.

The reservoir, which has a capacity of more than one million cubic meters of water, is virtually bone dry.

After a long drought, the once vast body of water is now a piece of parched land with a few puddles, dead lotus bunches and fishing boats and nets lying motionless on its bed. Birds walk about, looking for food and water pumps stand idle on its banks.

Kenh Lap, nearly five kilometers long and 40-100 meters wide, is the Mekong Delta’s largest manmade freshwater lake. Located in Tan Xuan Commune, it was built at a cost of VND85 billion ($3.6 million). It opened last August but could only function for six months before it was overcome by a salinity problem. Today the region’s largest water reservoir is dry land.

The reservoir is designed to supply water to more than 200,000 people living in 24 communes and towns for household use, and for industrial and irrigation purposes. The fact that it has gone completely dry has thrown daily life into disarray.
https://e.vnexpress.net/news/news/mekon ... 91483.html
Cambodia Expats Online: Bringing you breaking news from Cambodia before you read it anywhere else!

August 8, 2020
MRC warns of ‘Severe Impact on Cambodia’ as Mekong continues to dry up despite storms

The Mekong River Commission (MRC) said Friday it was urging the six Mekong countries to address low water flows as the basin endures record lows for the second year in a row.

“The current low flows could have severe impacts on Cambodia due to a loss of fisheries and irrigation potential,” the statement warned.

“We call on the six Mekong countries to increase data and information sharing on their dam and water infrastructure operations in a transparent and speedy manner with the MRC,” said An Pich Hatda, chief executive at the MRC Secretariat in Vientiane.

“It is time to walk the talk and to act in the common interest of the entire Mekong River Basin and the affected communities,” he said.

The statement said an MRC report released Friday on hydrological conditions from January to July identified “multiple possible causes” of the low flows and drought.

“Among these are abnormal low rainfall affected by the El Nino weather phenomenon, prolonged low flow conditions carried over from 2019, and lower water flow contributions from the Mekong tributaries,” the statement said.

“The low flows have caused Cambodia’s Tonle Sap Lake to experience ‘extremely dry conditions’, with reverse flows at their lowest on record since 1997,” it said.

“However, the MRC Secretariat has been unable to obtain official data and information to verify the potential impacts of storage operations in the upper basin.”

According to the report, the statement said, “there could be an ecological imbalance due to significant changes of timing, duration and extent of inundations in the Tonle Sap Lake and its surrounding floodplains.

“This could in turn lead to reduced reproduction through a loss of nursery areas, affecting the growth of fish and other aquatic animals and plants.

“A reduction in fish catch is predicted, threatening food security for the most vulnerable communities in the region.”
https://www.khmertimeskh.com/50752989/m ... te-storms/
Cambodia Expats Online: Bringing you breaking news from Cambodia before you read it anywhere else!