It's official: the Huawei Mate 30 phones are launching on September 19
By David Nield 2 hours ago Mobile Phones

We've already heard plenty of rumors and speculation around the Huawei Mate 30 Series phones, but here's something official: a launch date of Thursday September 19, with the unveiling happening at an event in Munich.

That's per the official Huawei Mobile Twitter account, so it's time to mark it on your calendars, book some time off work, or do whatever else you need to do in preparation.

The launch date tweet and accompanying preview site are encouraging us to "rethink possibilities" – so make of that what you will. There's also extensive use of what looks like a camera lens graphic, suggesting the Mate 30 phones will come packing some serious photo-taking capabilities.

We will of course be bringing you all the news as it happens from the Mate 30 Series event, and no doubt we're in line for plenty more leaks and rumors between then and now.
Some of the shine of the launch event is likely to be taken off by the news that the Mate 30 phones probably won't be able to use Google apps and services, thanks to the ongoing trade disputes between the US and China.

It's possible that Google will apply for an exemption for the Huawei Mate 30 handsets, but if not, Huawei is going to have to rely on its own HarmonyOS. We won't know exactly how this is going to play out until we see the phones themselves.

We're expecting both a Mate 30 and a Mate 30 Pro, at least. Previous leaked images point to a circular housing for the rear-facing camera, which could pack in as many as four individual lenses.

Other rumored improvements include faster wireless charging, but most attention is going to focus on exactly what software and apps the Huawei Mate 30 phones come running.

Smartphones were the most exciting tech to hit the planet 10 years ago. For the first five or six years, it was exciting to get latest and greatest. But they've now become quite boring to me. I had a Galaxy S7 which I kept for 3 years and kind of reluctantly upgraded to a Galaxy S10 earlier this year but I do regret it. It does nothing that my S7 couldn't do apart from it looks a lot nicer.

Innovation in the smartphone market is really starting to scrape the barrel now. Who cares if there's 1mm less bezel around the display? The camera's are as good as they're ever going to get, despite the hype, and while you're scrolling through your apps, does anyone ever stop to think 'wow, I'm so glad I bought a phone with the snapdragon 8560 instead of the snapdragon 8570)??

Phones are boring for most people like me who use them only for sending messages, occasional phone calls, scrolling through Facebook while I'm taking a dump or checking my email that is almost always 100% spam.
Top 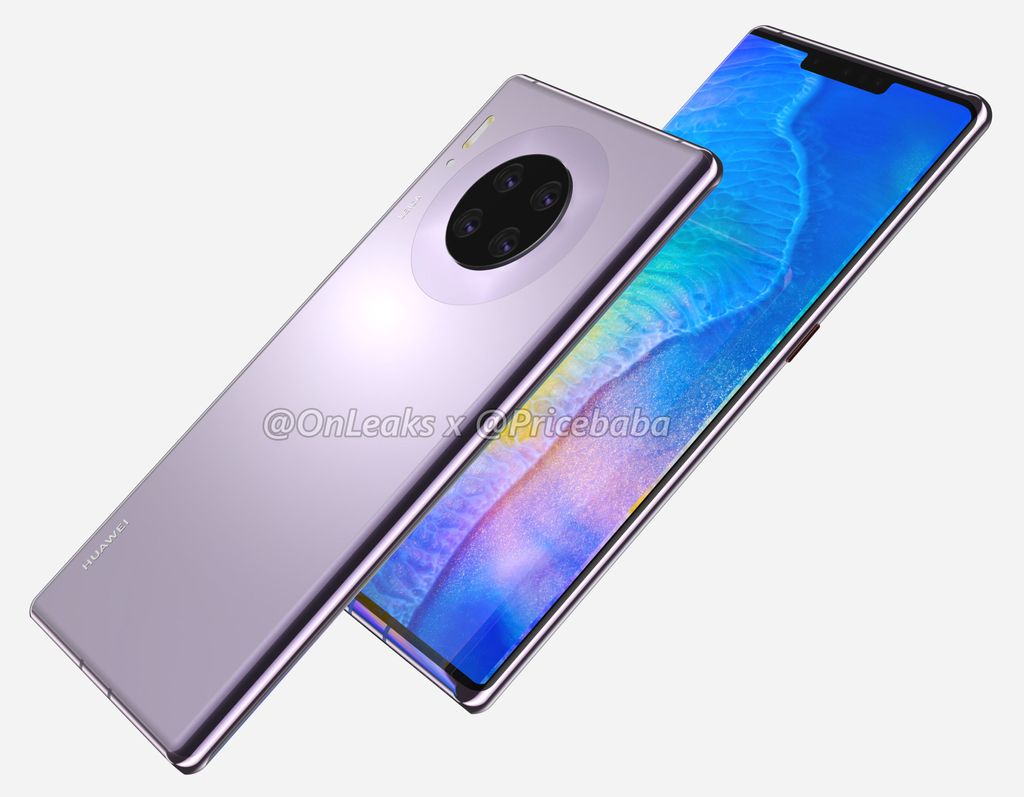 This is the new design of the Huawei Mate 30 Pro. On the front it is all screen except for a small notch.

On the back, it looks like a compact camera, which makes sense given Huawei's photo expertise and because it is rumored to have “breakthrough” video features. Love them or hate them, Huawei is making some excellent iron lately.

At least according to master rumormonger Ice Universe, who usually is spot-on on his predictions. In a tweet, the galactic cat pointed out that he is “looking forward to a breakthrough in video shooting”. If this means that Huawei has implemented its best-of-class depth of field and low-lighting photographic abilities into the Mate 30 Pro’s video mode, users will be very happy.

But for now, we only know for sure how the phone will look, thanks to these exclusive renders by @onleaks for Indian tech site Pricebaba. The renders are in line with a recently leaked marketing poster made public by Ice Universe. I’m digging the back design. Instead of doing the ugly square pirate patch found in early renders of the iPhone 11 and the Pixel 4, Huawei has chosen to embrace a symmetric camera look that reminds me of the Canon Ixus compacts, but more elegant and ultra-thin. I like the sharply cut top and bottom ends too.

According to the rumors, the camera module will have two 40-megapixel sensors, plus an 8-megapixel telephoto lens and a Time-of-Flight sensor capable of capturing three-dimensional information of the scene to make depth of field effects.

The first 40MP sensor will allegedly have a lens with variable aperture from f/1.4 to f/1.6, with a RYYB pixel layout, same as the current king of the photographic hill, the P30 Pro. According to Sony — the sensor manufacturer — the RYYB layout collects 40% more light than standard RGGB sensors. A RYYB sensor uses can capture there times more light as a standard RGGB sensor, since the Y pixels are made of two red and green pixels each.

The second 40MP sensor is the same as the first, but with a 120-degree ultra-wide lens. The telephoto will offer a 5x zoom, according to the rumors posted by reliable leaker @Onleaks. On the front the rumor is that there will be three sensors, perhaps to enable facial id and selfie depth of field effects. 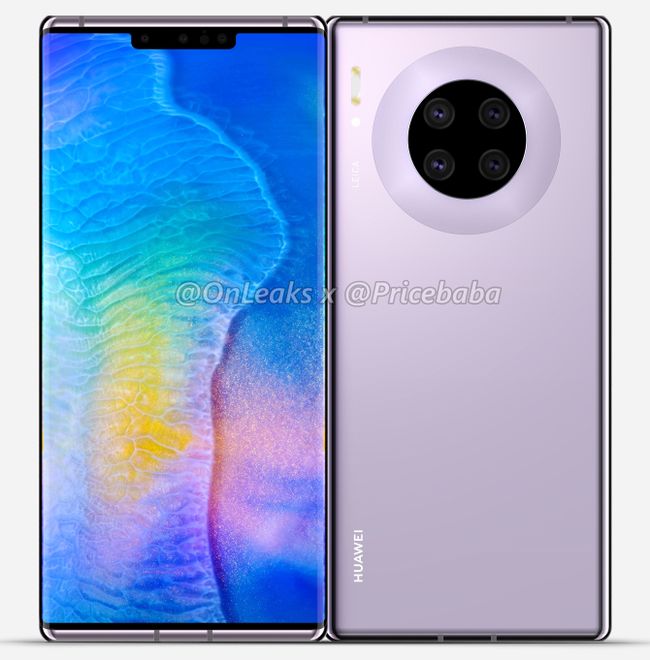 The display — which is a curved OLED similar to the one used in Samsung Galaxy phones — is estimated to be a whopping 6.6 inches, again according to @Onleaks. The entire package will be allegedly powered by the latest HiSilicon Kirin 990 chip, which has a built-in modem.

The phone will include a 4,500mAh battery with 25W wireless charging and fast 55W wired charging. It’s all pretty solid — except there is no headphone jack. The bottom has a USB Type-C pro, microphone, speaker, and the SIM card tray. 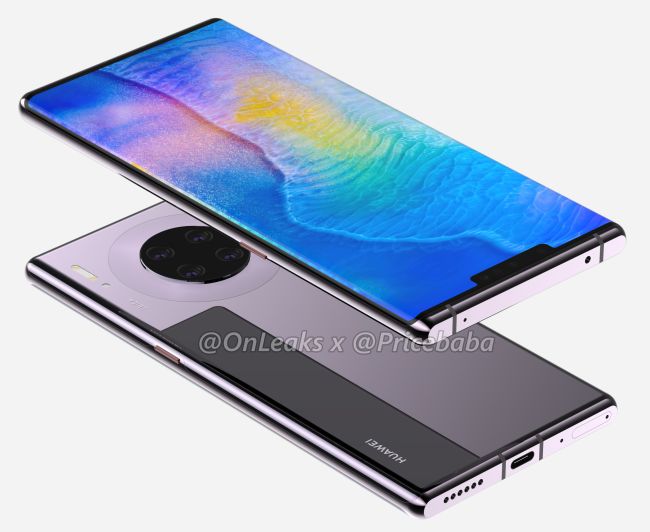 It is expected that the Mate 30 Pro will run an open source version of Android. Google confirmed that it has not licensed its apps for pre-installation in the Mate 30 and Mate 30 Pro following the U.S. Department of Commerce’s “Entity List” that bans American companies from doing business with the Chinese company.

Mate 30 users will be able to download the apps on the internet like they do in China — where Google apps are not included in Huawei terminals — installing an app shop like Aptoide, Google Play, or directly from any APK repository, like APKmirror.com. It’s a nuisance, but an acceptable one.

We will know more about the Mate 30 line when it is announced on September 19 in Munich, Germany.
Top

While I agree with much of what you wrote, the cameras are one of Huawei's strongest features and their innovations in that direction have well outshone their competitors - and at lower prices.
Top

While I agree with much of what you wrote, the cameras are one of Huawei's strongest features and their innovations in that direction have well outshone their competitors - and at lower prices.

But what do you do with the pictures? How often do you actually look at them after a day of taking them? I have an SD card that's almost full to the brim of pictures I've only ever looked at once, and will probably never look at again.
Top

[Admin Edit: No need to throw insults at fellow members. Take a couple weeks off, and knock it off if you decide to come back, or the ban can be extended. Thanks.]
Top

This thread feels like spam. They received the extension and announced Harmony will not be run on the phone, only a tv for now.

Multiple camera (this has 3 rear) is nothing new. It's like razor blades one had 2, the other 3, then one came out with 5 blades. Xandrue is correct to me. Phones seem to have reached a plateau.
For me though, the cool tech it has is the finger print sensor that is in the center and underneath the front glass.
The KoW, where you get tired of asking "WTH..?" Collector of high-end opium paraphernalia and looking for more.
Top

While I agree with much of what you wrote, the cameras are one of Huawei's strongest features and their innovations in that direction have well outshone their competitors - and at lower prices.

But what do you do with the pictures? How often do you actually look at them after a day of taking them? I have an SD card that's almost full to the brim of pictures I've only ever looked at once, and will probably never look at again.

No but your grandkids will thank you for taking them for many years after you have departed.
Cambodia,,,, Don't fall in love with her.
Like the spoilt child she is, she will not be happy till she destroys herself from within and breaks your heart.
Top

What a nice piece of shiny plastic junk! I must have 2, no, 4 of those right away!
Top
Post Reply Previous topicNext topic
24 posts

Users browsing this forum: No registered users and 31 guests