Breaking news from Cambodia can be found here. CEO often finds Khmer news and translates it into English for our readers if it is interesting to expats, locals, Cambodians living abroad and anyone who wants to stay informed of the latest local and international news stories about Cambodia and our neighbors in South East Asia. There are many sources for Khmer news articles and they can all be found here in one place. Most of the media comes out of Phnom Penh, Siem Reap or Sihanoukville, but we cover national Cambodian news from all provinces.
Post Reply Previous topicNext topic
26 posts 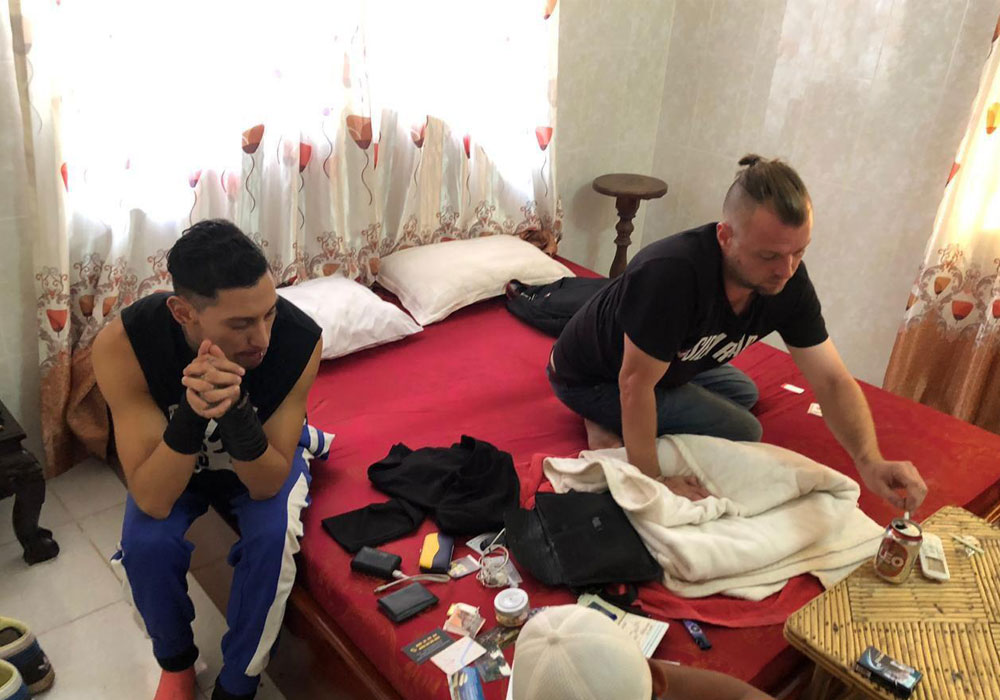 Cambodia Breaking News (Siem Reap): On August 19, 2019, at 9:30 am, the police from the investigation and procedure department (Immigration) collaborated with anti-drug police in the arrest of two foreign tourists in Siem Reap.
ERIC COMERCI​ , a 28-year-old Argentinian man, and a 41-year-old Danish man, DONALD GUNDEL​ SEJR​, were arrested for possession of drugs, after they were caught red-handed while taking drugs in Room 206 at a guesthouse located in Stung Thmey Village, Sangkat Svay Dangkum, Siem Reap City. 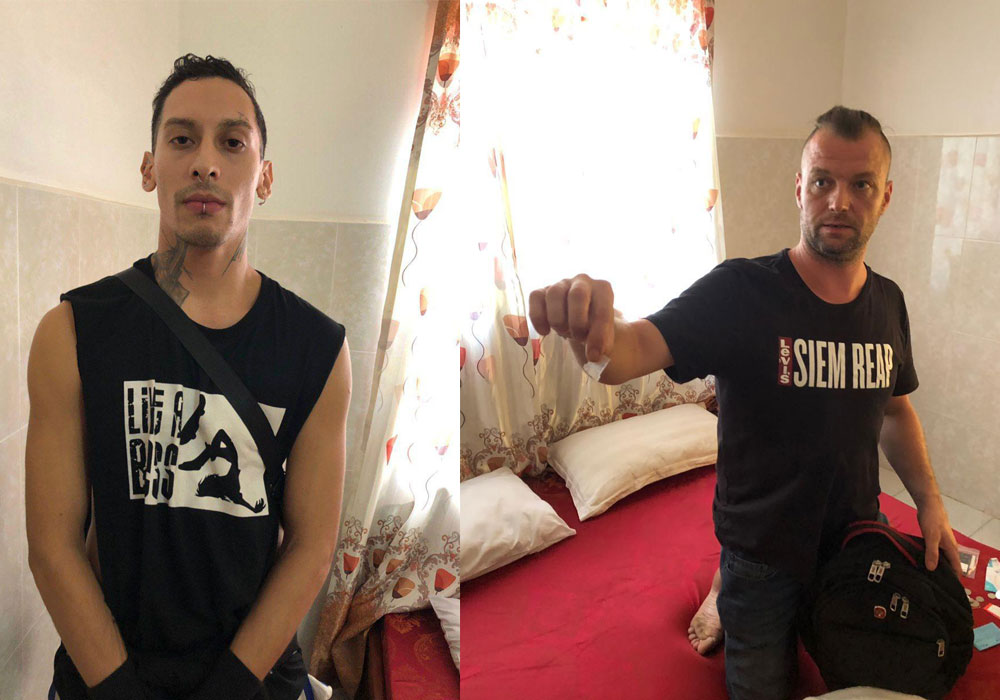 During the raid, the police confiscated a packet of white powder drug and some equipment for using drugs. Mr. Kert Vannareth, the prosecutor of Siem Reap court, decided to detain the two foreigners at the Anti-drug department for case preparation.
Cambodia Expats Online: Bringing you breaking news from Cambodia before you read it anywhere else!

Why would a guesthouse owner sick the cops on them?
Top

hanno wrote:Why would a guesthouse owner sick the cops on them?

Because he doesn't want two bodies from an OD in his guesthouse?
Ex Bitteeinbit/LexusSchmexus
Top

Siem Reap Provincial Court yesterday charged a Danish national, an Argentinian national and three Cambodians with drug use and trafficking.

Brig Gen Mara said they were all charged with drug use and trafficking after they were arrested by provincial anti-drug police in Siem Reap city on Monday. They are currently in pre-trial detention, he added.

Captain Huoth Dara, a police officer working with Siem Reap city police, yesterday said they were previously suspected of drug use and selling drugs to foreign tourists in the province.

Cap Dara noted that they were arrested at about 6.30pm on Monday, after police raided a guesthouse in Svay Dangkum commune, where they were staying.

He said police monitored their activities for about one month before cracking down and arresting them on Monday.

Cap Dara noted that two of the Cambodian men worked as translators for the tourists, while the woman was a cook.

“They were arrested while they were smoking drugs inside the guesthouse room,” he said.
https://www.khmertimeskh.com/50635876/f ... afficking/
Cambodia Expats Online: Bringing you breaking news from Cambodia before you read it anywhere else!

A gofundme was set up late last year to get Eric Comerci out of jail.

Why would anyone contribute to a go fund me for a drug trafficker?
Top

oh get off the fence
Top

Why all this attention ? Eric Comerci is an Argentinian dancer and choreographer and his friends have been trying to raise money to get him out on bail since January 2020. 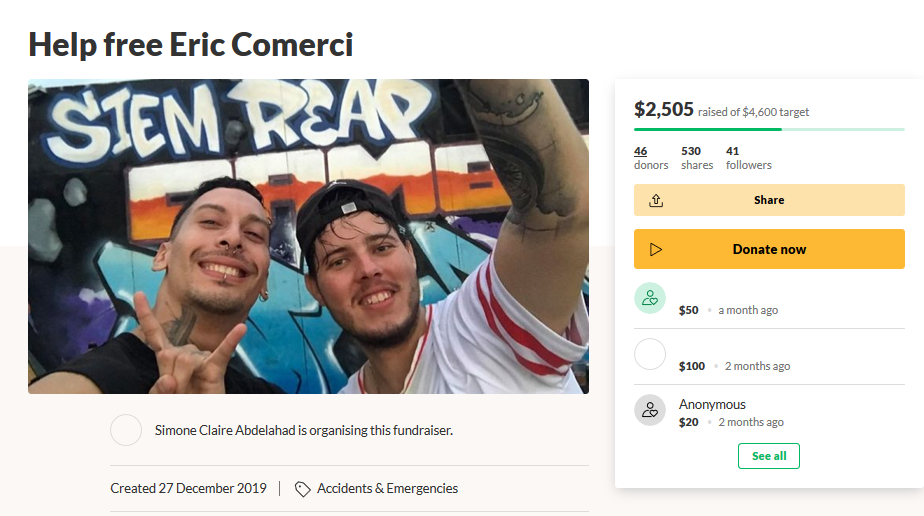 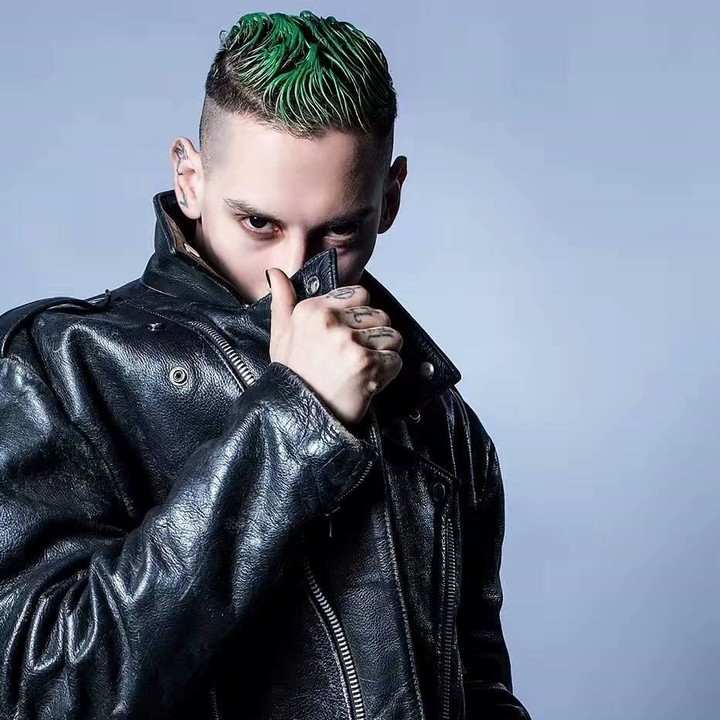 His name is Eric Comerci, he is an Argentinian dancer and he has been detained in a Cambodian prison since August: he is accused of drug use and trafficking. Right now, an online campaign is trying to raise funds to post bail.

According to the Cambodian news site Khmer Times, Comerci was arrested in the morning on August 19, 2019 . The Immigration Police and the Anti-drug brigade raided the room of the hotel where Comerci was staying in the city of Siem Reap, near the border with Thailand.

"We seized two packages of methamphetamine, a scale, four telephones, instruments for consuming drugs and passports," the district police, who also participated in the raid, told the Cambodian site. Prosecutor Kert Vannareth ordered the arrest of Comerci and the Danish man, Donald Gundel Serj, who shared his room. Three Cambodians were also arrested, suspected of working as translators in the sale of drugs to tourists.

The Cambodian police report said that they had monitored the activity of the Argentine, the Dane, and the Cambodians during the month prior to the operation. It was also reported that at the time of the actual police raid, the Argentine and the Danish were found using drugs and that all five detainees tested positive for a substance abuse test.

The provincial court has charged Comerci, 29, with drug use and trafficking: he has been maintained in prison since his arrest in August.

"In August 2019 Eric was in the wrong place at the wrong time and was sent to Siem Reap Prison," says the gofundme.com platform, which calls for "friends, family, acquaintances and everyone who supports Eric Comerci" to donate money to reach the $ 3,200 that, according to the publication, is needed to pay the bail of the Argentine dancer.

"Eric is one of the most passionate and creative people I know. He is a kind friend, an amazing dancer and he needs our help," says the post signed by another dancer. "Eric has been in that hell for four months, they only give him water and rice twice a day, the sanitary conditions are so bad that he had a reaction on his skin," says the site, adding: "He is separated from his family and his friends awaiting trial. "

That same publication maintains that the $ 3,200 is unpayable for the Comerci family and that, therefore, any amount is useful and appreciated. So far, it has raised 30% of what is necessary. But the campaign continues.

Comerci was filming in Siem Reap at the time of his arrest: