She says she came to Cambodia to start a business because in Nanning city, where she hailed, $20,000 is not enough to operate a restaurant.

"Ms Sopheak says her regular local and western customers have slowly disappeared, while her shop is now surrounded by Chinese restaurants and massage parlours."

"In order to make ends meet, Ms Sopheak says she had to rent out her storehouse to a Chinese national."

“We have set conditions for Chinese nationals who wish to run a business in Cambodia, including [conditions covering] hygiene, signature and location,” Mr Sothy says. “By doing so, we are able to manage them and their businesses.”

"There are more Chinese tourists than other foreign tourists,” Ms Chenda says. “But in terms of contribution to local vendors, it can be said that it is very little.”

She says that Chinese tourists visit the Kingdom, but they do not purchase local products or enlist the services of locals."

Full https://www.khmertimeskh.com/50622607/b ... m-chinese/
The idea that seeing the world is going from place to place to look at obvious things is an illusion natural to dull minds.
Top

Re: Locals Concerned with Chinese Competition.

Chinese-owned shops are on the rise in central Phnom Penh 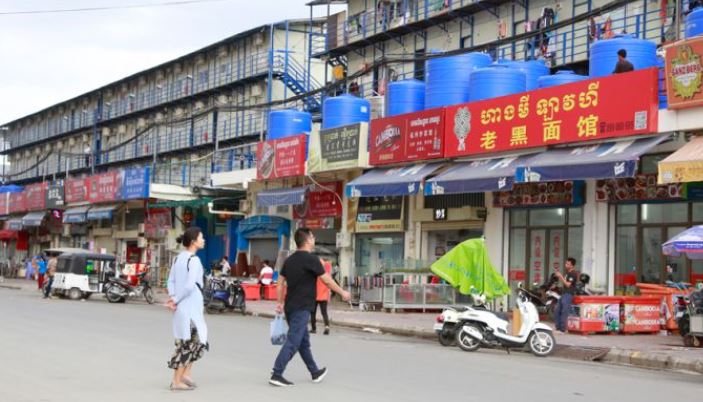 The influx of Chinese nationals over the last few years has been a hot topic of discussions among locals for its positive and negative aspects.
Sok Mao, a shop owner in Central Market, said the market has seen an increase in the number of Chinese nationals buying commodities, vegetables and fish.

She said there are also some Chinese-owned seafood and variety shops in the market.
“They only buy goods from Chinese nationals. As I cannot speak Chinese, they do not buy my wares,” she said.
Another vendor who asked not to be named said that with the growing number of Chinese nationals in Phnom Penh, she expects that more of them will open up small businesses like locals.
“I’m not interested in the Chinese, but if the Chinese were to come and run shops here, it could hurt Cambodian businesspeople,” she said.
The Ministry of Labour and Vocational Training this week said it will ban foreigners who live in Cambodia from opening informal businesses to curb competition with local family-run ones.
With hotels, restaurants, casinos and Chinese-owned shops, the area around Koh Pich now resembles a small Chinese town.
Chan Sok Mom, a mobile beverage-vendor near the Toyoko Inn Hotel, said that at night, the area turns into a Chinatown, with many Chinese nationals remaining until dawn.
“At night there are so many Chinese. I do not know where they came from,” she said.
Phnom Penh authorities could not be reached for data on the number of Chinese-owned businesses.
At Koh Pich and the surrounding area, there are many small businesses run by Chinese nationals such as barbershops, massage parlours, phone repair shops and grocery stores.
Sao Socheat, a traditional tuk-tuk driver, always waits near a bridge to Koh Pich for customers, most of whom are Chinese.
“Some Chinese people give me a lot of money, that is why I am here,” he said.
In Sihanoukville, Chinese nationals are said to own more than 90 per cent of businesses, ranging from hotels, casinos, restaurants to massage parlours, according to a report by the Preah Sihanouk provincial authorities.
The report showed that there are currently 156 hotels and guesthouses of which 150 are Chinese-owned. There are 62 casinos, of which 48 have Chinese investment.
There are 41 karaoke clubs and 46 massage parlours owned by Chinese nationals. They own 95 per cent of the 436 restaurants in the area.
These businesses are tailored to serve Chinese nationals, especially workers at construction sites invested in by the Chinese.
Cambodia expects to receive about 2.6 million Chinese tourists this year and about three million by next year, five million by 2025 and about eight million in 2030.

Re: Locals Concerned with Chinese Competition.

This is very similar to the post you opened with "Kung-fu Hillbilly" but 8 days later, use of the same photo's. That is one thing in it's self, the prefab buildings in the photo's seen there behind the row of shops (if I am not mistaken) will give a certain hold very quickly to any area, with room to erect them in no time at all. In the short time I have been in Phnom Penh I have witnessed quite a change.
Top
Post Reply Previous topicNext topic
3 posts • Page 1 of 1