Have questions or resources regarding Khmer Culture? This forum is all about the Kingdom of Cambodia's culture. Khmer language, Cambodian weddings, French influence, Cambodian architecture, Cambodian politics, Khmer customs, etc? This is the place. Living in Cambodia can cause you to experience a whole new level of culture shock, so feel free to talk about all things related to the Khmer people, and their traditions. And if you want something in Khmer script translated into English, you will probably find what you need.
Post Reply Previous topicNext topic
57 posts

Gov’t promises support for LGBTIQ community
28 June 2019
Some 150 people, including representatives of the government and relevant ministries, the LGBTIQ community (lesbian, gay, bisexual, transgender, intersex and queer), local authorities, ambassadors, parents and guardians held a meeting on Thursday under the theme Dialogue on Legal and Public Policies to Protect LGBTIQ People in Cambodia.

Keo Remy, head of the Cambodian Human Rights Committee, said at the meeting that the government had called for an end to discrimination against the LGBTIQ community and supported all forms of freedom of expression.

“Prime Minister HE has sent a message through me to inform the members of the LGBTIQ community at this meeting that the government stands against all discrimination against LGBTIQ people."

“This is the positive message that I will take to the UN Human Rights Council in Geneva, while we have included it in the Universal Periodic Review [UPR] meeting. We clearly state that the Cambodian government stands against discrimination."

“It is very important for LGBTIQ people to come together and create a platform with which to express themselves for the general public to understand. The government supports this,” Remy said.

Remy said Cambodian tradition could make it difficult for parents to accept their children’s choice of partner, particularly if they were of the same sex.

“Cambodian culture can make it hard, not only for the LGBTIQ community but for people to choose who they marry. Marriage is often arranged by parents. This issue has improved, and parents now often go along with their children’s decision,” he said.
https://www.phnompenhpost.com/national/ ... -community
Cambodia Expats Online: Bringing you breaking news from Cambodia before you read it anywhere else!

Why Prumsodun Ok Founded Cambodia's First Gay Dance Company in His Living Room
27 June 2019
How do you respectfully preserve a dance tradition that is more than 1,000 years old while recontextualizing it for 21st-century audiences? Perhaps no one has done it so well in recent memory as Prumsodun Ok, the founder of Prumsodun Ok & NATYARASA, Cambodia's first gay dance company.

Ok, a Long Beach, California, native whose parents were Cambodian refugees, not only restages traditional works of Khmer classical dance but also uses the stories and vocabulary of the ancient style to create new works that center LGBTQ+ characters and perspectives. In the process, he's helped to revitalize and bring global attention to an art form that was nearly wiped out with the vast majority of its practitioners in the Khmer Rouge genocide of the late 1970s. We caught up with him via email.


Article: https://www.dancemagazine.com/prumsodun ... belltitem9
Cambodia Expats Online: Bringing you breaking news from Cambodia before you read it anywhere else!

The report said research, jointly carried out by RoCK and a team led by Kasumi Nakagawa, gender academic at Pannasastra University of Cambodia, also showed that 35 percent of the LBT community had considered suicide following their families’ non-acceptance.

The report said the research, titled “Family Violence towards Lesbian, Bisexual and Transgender (LBT) people in Cambodia,” was carried out through interviews with 61 LBT people across eight provinces.

It said 81 percent, aged below 35 years, revealed they faced emotional violence such as being beaten or having their liberties controlled.

“LBT people identified that compared to non-family violence towards them, family violence had the most negative impact on their lives,” the report noted.

It said that the violence stemmed from intersecting factors, including traditional parenting methods, rigid social norms and religious and/or ethnic beliefs.
https://www.khmertimeskh.com/50625480/m ... -violence/
Cambodia Expats Online: Bringing you breaking news from Cambodia before you read it anywhere else!

More on Prumsodun Ok and his gay dance company on this PBS News Hour video from 5 September 2019:
https://www.pbs.org/newshour/show/how-c ... -tradition
Cambodia Expats Online: Bringing you breaking news from Cambodia before you read it anywhere else! 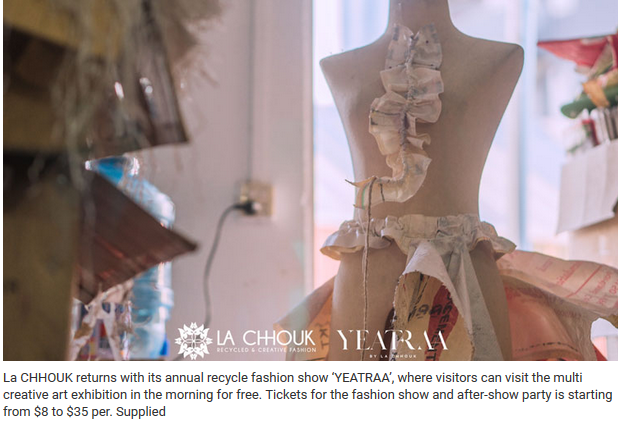 November 21, 2019
La Chhouk to stage ‘YEATRAA’ solo
La Chhouk, a recycle fashion design group which is well known in fashion circles, is now emerging in its own right by hosting a solo fashion show alone. This year, ‘YEATRAA’ will become the first solo fashion show hosted by La Chhouk at Factory Phnom Penh on November 30 with the mixed theme of waste management and LGBT+. 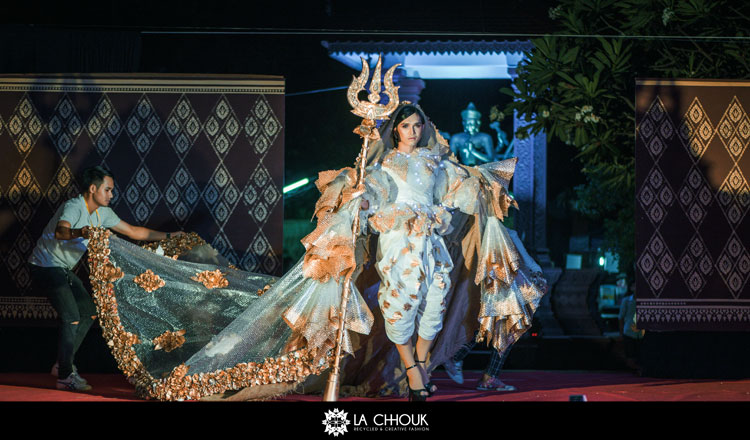 Ith Sovannareach, a co-founder of La Chhouk said that ‘YEATRAA’, the name is inspired by a Khmer word which means walking to somewhere, just like doing a fashion show.

“Our concept is we want to protect environment. In the event, we are going to tell people that garbage that people are throwing away is also a material for creative art. This event also tells people about the impact of garbage you have made in daily life,” said Mr Sovannareach.

Ten designers with some 40 in the logistics team and models are now getting ready for the big day. With 90 percent of the team being university students, he said, La Chhouk wants to give young people a golden opportunity to show off their talent as well as to improve their creativity.

Tickets for the fashion show and after-show party is $30. Some of the proceeds from ticket will be contributed to the mangrove planting activity in Trapeang Sangkae Community Based Ecotourism-Kampot province on Dec 21-22.

“We want to propose ideas of environment protection. So aside from cleaning up the environment, we need to do reforestation. The mangrove trees are important to the ocean and ecosystem which we should consider saving,” said Mr Sovannareach.
Full article: https://www.khmertimeskh.com/50662628/l ... traa-solo/

Previous post on this same outfit: post291248.html?hilit=recycled%20fashion#p291248
Cambodia Expats Online: Bringing you breaking news from Cambodia before you read it anywhere else!

PHNOM PENH — Members of the LGBTIQ community on Monday asked the Cambodian government to legislate protections against discrimination, coinciding with a report released by a rights group which shows that a fifth of respondents saying they had been rejected a job because of their identity.

The rights group also released a report that revealed members of the LGBT community routinely faced discrimination on the basis of their sexual orientation, gender identity and expression (SOGIE). This had led to 25 percent of respondents to hide their SOGIE during a job interview for fear of losing out on the opportunity.

Noun Sidara, gender and identity project coordinator at CCHR, said the lack of legislative protections was one of the reasons the community was discriminated against by people around them, including at home and at work.

“If there was no discrimination, [members of the community] would have the same rights in the workplace and schools, particularly helping to prevent domestic violence from their parents,” Noun Sidara said.

Activists at the event pointed out that the community faced hurdles to access higher education and wanted legislation to push for marriage equality.

Chhun Monyvichera, who identified as lesbian, said the discrimination against community members was making it hard to access opportunities and express themselves freely.

“I want to see legal protections for the LGBTIQ community, so they can do just about anything if they are capable,” Chhun Monyvichera said.

Chhun Monyvichera said it was time the government also ensured marriage equality for all citizens.
https://www.voacambodia.com/a/lgbtiq-co ... 99963.html
Cambodia Expats Online: Bringing you breaking news from Cambodia before you read it anywhere else!

Users browsing this forum: No registered users and 63 guests