The Lost City of Cambodia

Have questions or resources regarding Khmer Culture? This forum is all about the Kingdom of Cambodia's culture. Khmer language, Cambodian weddings, French influence, Cambodian architecture, Cambodian politics, Khmer customs, etc? This is the place. Living in Cambodia can cause you to experience a whole new level of culture shock, so feel free to talk about all things related to the Khmer people, and their traditions. And if you want something in Khmer script translated into English, you will probably find what you need.
Post Reply Previous topicNext topic
14 posts

The five-week excavation within the Phnom Kulen National Park focused on a specific building within a 400-metre-by-600-metre site believed to be the palace compound of Jayavarman II. It was first identified in 2009, said Jean-Baptiste Chevance, the program director of the NGO Archaeology and Development Foundation, which works closely with the Apsara Authority and trains student archaeologists.

“The first investigation was precisely on that building in 2009 and the second was the Lidar survey in 2012, which confirmed that the site in itself was [likely] the royal palace,” he said, referring to a remote sensing method that can reveal ground features otherwise hidden by vegetation. “We are interested in the way it was constructed and the way it was used.”
https://www.phnompenhpost.com/national/ ... ires-first

More here on the site:
http://www.adfkulen.org/phnom-kulen.html
Cambodia Expats Online: Bringing you breaking news from Cambodia before you read it anywhere else!

The event is making the archaeology news worldwide.

SIEM REAP, CAMBODIA—According to a report in The Nation (Thailand), archaeologists led by Jean-Baptiste Chevance have been excavating a site they think may be the ninth-century royal palace of Jayavarman II in Phnom Kulen National Park, located in a mountain range some 20 miles north of Angkor Wat. Jayavarman II was the first ruler of the Angkor Empire. The massive compound was investigated with lidar technology in 2012. “It’s obviously one of the most important buildings because of the quality of the construction,” Chevance said. The square building, made of high-quality brick, was surrounded by a series of concentric walls. Radiocarbon dates obtained from the site suggest the building was abandoned late in the ninth century, which corresponds with inscriptions relating to the reign of Jayavarman II. No inscriptions have been found to date in the well-made building, however.
https://www.archaeology.org/news/6535-1 ... man-palace
Cambodia Expats Online: Bringing you breaking news from Cambodia before you read it anywhere else!

The scenic northern section of Phnom Kulen National Park was once the site of ancient city of the Khmer Empire Mahendraparvata, or Mountain of the Great Indra. Today, the long gone city’s splendour lives on in stunning rock carvings depicting Hindu deities.

Hidden in the forest, the 11th century carvings have a wonderful history that attracts archaeological students and tourists curious about the ancient city.

Overhanging rocks on mountains are also believed to be a sacred place to have temples or shrines, and though they are rare, carvings and ancient inscriptions of deities in such locations can still be found today.

Among the already discovered carvings is Poeung Komnou, or Poeung Keng Korng, on the northern side of Kulen Mountain. It is located in Ta Siem commune’s Trapaing Toem village in Svay Leu district.

To reach the site, about 30km from Angkor Wat, you drive down National Road 6 heading east and turn left at Damdek commune heading towards Beng Mealea temple.

Once you reach Beng Mealea temple drive a further 10.5km until you reach Svay Leu town where you will need to turn left into Phnom Kulen National Park.
At this point the road becomes too narrow for cars and it is recommended you find a local guide to take you to the carvings.
https://www.phnompenhpost.com/travel/vi ... ional-park
Cambodia Expats Online: Bringing you breaking news from Cambodia before you read it anywhere else! 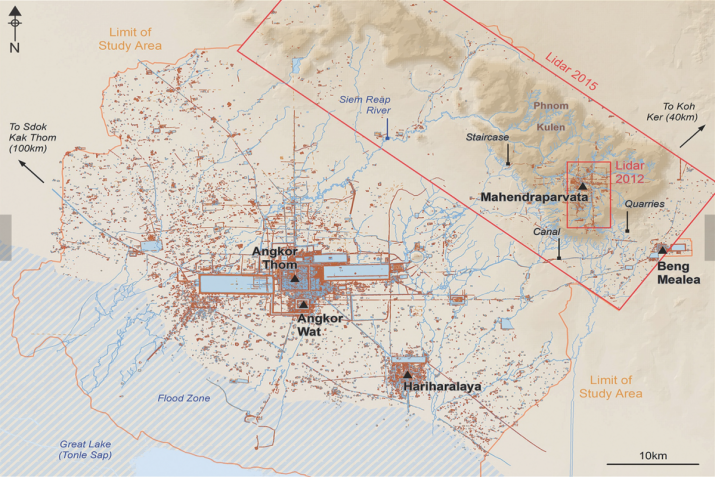 Inscriptional evidence suggests that the Phnom Kulen plateau to the north-east of Angkor in Cambodia was the location of Mahendraparvata—an early Angkorian capital city and one of the first capitals of the Khmer Empire (ninth to fifteenth centuries AD). To date, however, archaeological evidence has been limited to a scatter of small and apparently isolated shrines. Here, the authors combine airborne laser scanning with ground-based survey to define an extended urban network dating from the ninth century AD, which they identify as Mahendraparvata. This research yields new and important insights into the emergence of Angkorian urban areas.

Long read: https://www.cambridge.org/core/journals ... ore-reader
Cambodia Expats Online: Bringing you breaking news from Cambodia before you read it anywhere else!