Thuy Chanthourn, the deputy director of the Institute of Arts and Culture of the Royal Academy of Cambodia, said the remnants of the temples had not been recorded in earlier Cambodian or French archaeological studies, including Inventaire descriptif des monuments du Cambodge by E Lunet de Lajonquiere from 1902-11.

They had also not been registered in the Ministry of Culture and Fine Arts’ list of ancient temples.

“The French registered more than 10 temples in the northern Samphu Borak area, while the provincial department of culture discovered more than 50 others. I have found nearly 100 temples that have not been unearthed before. We will carry out further inspections and studies,” Chanthourn said.

He said the temples were constructed from sandstone and dedicated to the Brahmanism religion of early Hinduism.

Only the foundations remained of Trapaing Prey, the final Chenla-era temple in the Samphu Borak area discovered by Chanthourn.

He said his team will use the global positioning system (GPS) to carry out in-depth research into the temples and record and preserve them as areas of important historical value.

He said people must be educated as to the importance of the ancient sites as in the past, villagers had damaged them looking for items of worth.

“Local people in the past have dug at the foundations of the temples looking for statues and other valuable relics to sell,” he said.

Royal Academy of Cambodia archaeologists found the ancient foundations as part of their research into the Chenla civilisation that also took them to locations in Kratie, Mondulkiri, Ratanakkiri, Kampong Thom and Kampong Cham provinces, as well as to Vietnam and Laos.
https://www.phnompenhpost.com/national/ ... ed-temples
Cambodia Expats Online: Bringing you breaking news from Cambodia before you read it anywhere else! 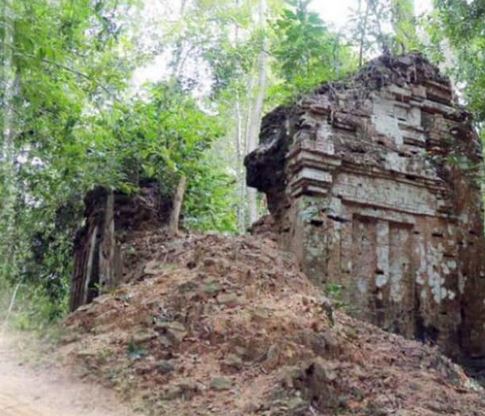 Cambodia News: According to the Ministry of Environment, an ancient temple hidden in the jungle has been discovered in Kampong Thom or Kratie Province.*
Archaeologists’ preliminary conclusion is that the temple was built during the late 8th century and resembles the style of Kampong Preah, a temple from the late Chenla era. More to follow.
* The location differs according to news reports.
Cambodia Expats Online: Bringing you breaking news from Cambodia before you read it anywhere else!