This is a part of our Cambodia forums to chat about anything Cambodia-related. This discussion forum is at the top of our site because it's usually the busiest part of the expat community chatter with random topics on just about everything, including expat life, Khmer politics, Cambodian blogs we have or have come across, or whatever else our members want to discuss. Whether you're an expatriate, tourist, Cambodian or random traveler just passing through South East Asia, you are welcome to talk about anything or start new topics yourselves.
Post Reply Previous topicNext topic
45 posts

It's still unclear what the official line is.
Latest report on the incident from Fresh News says they are still searching for the culprits, but doesn't mention whether in Cambodia or China.
13/05/19 17:46 (Chinese)
http://cn.freshnewsasia.com/index.php/e ... 43-07.html

Typically and conveniently confused reporting.
===============
We are all puppets in the hands of an insane puppeteer...
--Brother Theodore
Top

False flag to get the Chinese cops there on a permanent basis?
Top

CEOCambodiaNews wrote: ↑
Mon May 13, 2019 4:22 pm
Breaking news: An unconfirmed report says that Chinese police have arrested a Chinese man who posted a bragging video of the insecurity in Sihanoukville.
According to a source close to the Chinese embassy in Cambodia, a Chinese man who posted the video clip threatening Sihanoukville's security was arrested by police in China on May 13, 2019.

After the arrest, the suspect confessed to filming and posting the video, and has been charged for their crime.

However, sources close to the embassy confirmed that the Chinese authorities would send the suspects to Cambodia to hand over to Cambodian developers to continue to help building the casinos

Fixed it for you

[Admin Edit: We are serious about getting rid of those whose main objective is to troll. Take a week off and decide if you want to be a part of the community or not. Thanks.]
Don’t listen to Chinese whispers.
Top


In recent years, Chinese developers have built more than 100 casinos and dozens of hotels and resorts in the province, situated on Cambodia’s southwestern coast.

In a video circulated on Facebook, a Chinese man speaks to the camera while surrounded by about 20 other Chinese men, some of them sporting tattoos and cheering.

“Kampong Som, in the next three years, whether it will be safe or chaotic is under my control,” the leader declares in Mandarin, referring to Preah Sihanouk by its alternative name.

https://www.scmp.com/news/asia/southeas ... 1557820173
In a nation run by swine, all pigs are upward-mobile and the rest of us are fucked until we can put our acts together: not necessarily to win, but mainly to keep from losing completely. HST
Top

From the National Cambodian Police website tonight:
On May 14, 2019, the National Police Chief confirmed, after collaborating closely with the Chinese side to investigate this case, that the video clip posted on social media, featuring threats of insecurity in Sihanoukville, was in fact made in China.
After research, and with the cooperation of the Chinese police, the Cambodian authorities have determined that none of the gang members featured in the video are present in Sihanoukville or anywhere in the Kingdom of Cambodia.
Cambodia Expats Online: Bringing you breaking news from Cambodia before you read it anywhere else!

Khmer press article on Cambodian concerns about the Chinese, following the uproar caused by Chinese "gangster video".
To put the following article in context, it was published by a Khmer press outlet the day before the announcement by the authorities that the Chinese gangster video was actually made in China. However, it gives an insight into the rising concern of Cambodian citizens about Chinese lawlessness in Sihanoukville and Cambodia. 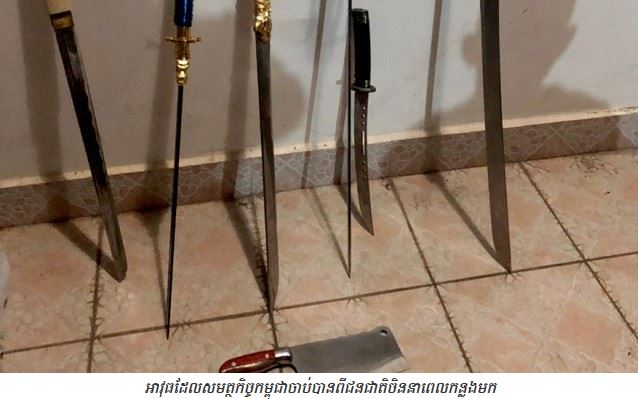 - Reprehensible actions by some Chinese nationals on Cambodian territory have triggered great concern. These include acts of violence, murder, intimidation, gambling, drinking, driving, disobedience, drug trafficking, and extortion. Preah Sihanouk Province is the hottest hot spot for the Chinese.

In a video clip, a group of Chinese have declared an insecurity warning in Sihanoukville, seeming to have taken control of the entire province. They are not afraid to ignore the law.
Surprise! How do they dare to do this ?

Nowadays, Cambodians are worried and are becoming more and more alert because some Chinese people are constantly struggling to keep up with each other. The latest report shows that in the first three months of the year 2019, the Chinese were the number one criminal offenders in Cambodia.(sic)

In fact, the Chinese are not all bad and frightening. Some are respectable and worthy of being exemplary. For Chinese wrongdoers, they should be embarrassed when they commit these crimes because their country is supposed to be an advanced, prosperous, and civilized country; a country of many scholars that from ancient times developed theories of morality and virtue. Khmer people do not discriminate against any nation, but they do not welcome disgusting people.

However, we observe that the Cambodian Government and the Chinese Embassy in Cambodia have confirmed their efforts to prevent this phenomenon caused by the Chinese.
The governments, as well as local authorities, must take action and enforce Cambodian laws on Chinese and other foreigners so they will be scared and stop thinking that Cambodia is a land where they can easily commit crimes.
In fact, people are really sick of seeing foreigners, especially some Chinese, who seem to be willing and proud to commit crimes without fear of Cambodian law.

The government must crack down on anarchic aliens to increase confidence for Cambodian citizens.
Cambodia Expats Online: Bringing you breaking news from Cambodia before you read it anywhere else!

Reprehensible actions by some Chinese nationals on Cambodian territory have triggered great concern. These include acts of violence, murder, intimidation, gambling, drinking, driving, disobedience, drug trafficking, and extortion. Preah Sihanouk Province is the hottest hot spot for the Chinese.

Surely this isn't just about the chinese people per se?

Rather, isn't it about the vice in Sihanoukville...how it's become a casino town with associated gambling, loan sharking, drugs and prostitution etc. Seems to me organised crime and gangs etc will follow where the flow of money is....unless it's properly regulated..

I wonder what the outcome might have been if it had just been a beach resort town serving mainly chinese tourists minus the casinos.
Top
Post Reply Previous topicNext topic
45 posts