Do you have a Cambodian trip report you want to share? Post it here, and feel free to link to your blog if it's a travel blog for Cambodia, South East Asia, or anywhere really. You can ask and answer questions about travel advice in Cambodia or just share your pictures and videos with us. Most people who live in or visit Cambodia have also checked out nearby countries like Vietnam, Thailand, Laos, Myanmar, Malaysia, Indonesia and the Philippines, and you can get to most of these countries by traveling overland, so put any travel plans, reviews or questions here. Discussions about dirt bike trails in here as well.
Post Reply Previous topicNext topic
24 posts

violet wrote: ↑
Sat Aug 25, 2018 1:53 am
What are the laws about public liability and prof indemnity here? ...not asking about whether they are enforced, just wondering what they are.

About ten years ago I went to visit a river near the Battambang /Pursat border, they had a zipline, duck boats, and a bunch of other things. About half way through the day, the zip line pulleys started to come off, people became stuck half way across the river and then began to get the wire to shake and the travel on this steel braided cable was impressive, it would go about 20ft up and drop about 20ft down with each wave, eventually some of the pulley keeper / gates just gave up and people were flung into the air or went crashing down into the river below. Meanwhile, the sketchy duck boats that were being paddled around by kids without life jackets began to run into trouble, and I watched as one of them actually sank into the river near me. Looking around I didnt see one of the kids, so I slipped down to the bottom of the river and low and behold here was a 14-16 year old girl just standing on the bottom, hands outstretched straight up, when I pulled her up she was quite calm and we asked her what she was waiting for, and she said for someone to come get her. It is beyond a miracle nobody died that day. And yet somehow kids drown in supervised pools in Battambang, go figure.

I would say that you probably take your life into your own hands anytime you participate in any activity in Cambodia. That just seems to be the way it is. Odds are, whatever the failure is, will probably resort in your death, making it very hard to file a complaint. Just my 2c.
Top

Hot air balloon tourism on the rise
Jason Thomas
8 January 2019
Adventure tourism is gaining a strong foothold in ASEAN, a region which already enjoys a mature and well-developed tourism market.

Blessed with jungles teeming with flora and fauna, an abundance of underwater life and a wide range of islands, mountains and cliffs to explore, Southeast Asia has world-class adventure destinations and has been marketed as such.

The ASEAN Tourism Strategic Plan (ATSP) 2016-2025 states that adventure tourism should be promoted regionally. Prior to that, the ASEAN Tourism Marketing Strategy (ATMS) 2017-2020 stated that ASEAN member states have adopted nature and adventure as one of its four overarching themes.

The ATMS 2017-2020 defines adventure travel as travel which involves exploration or travel to remote, exotic and possibly hostile areas.

“It gains much of its excitement by allowing its participants to step outside their comfort zone and may include activities such as mountaineering, trekking, bungee jumping, mountain biking, rafting or rock climbing,” stated the report.

Though rafting and rock climbing have long been on the bucket list for adrenaline junkies in Southeast Asia, hot air ballooning is steadily gaining in popularity.

From floating over the skies of Cambodia’s historic Angkor Wat to taking in views of Malaysia’s vast Kenyir Lake, a growing list of operators are offering thrill seekers a unique bird’s-eye view of familiar sights.
https://theaseanpost.com/article/hot-ai ... urism-rise
Cambodia Expats Online: Bringing you breaking news from Cambodia before you read it anywhere else!

that genius wrote:Crossing the damn street is adventure enough for me, thank you

Bob and weave, in most cases your faster than the foe 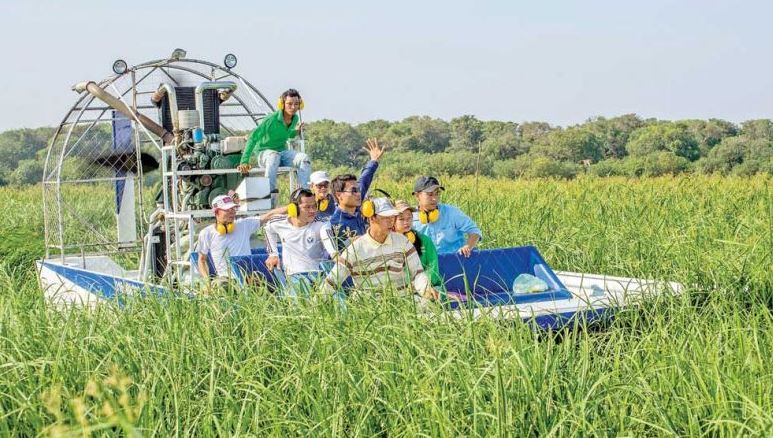 Two Cambodian brothers broke new ground and found a creative way to earn a living after teaching themselves to build an airboat, now using the vehicle to provide tours of Tonle Sap lake.

In 2012, Som Samnorp and his younger brother Som Samnang – both engineers from Arey Ksat Village near Phnom Penh – came up with the idea of modifying an airboat to use on Tonle Sap lake. Their vision was to provide a safe and effective way for tourists to explore the area.

Following three years of rigorous self-taught study in 2015, the brothers became the first people in Cambodia to build an airboat.

Soon after, they launched Komnob Airboat Tours. Today, the tours are proving a hit with visitors, both Cambodian and foreign alike.

“My goal is to use this airboat to serve the tourism industry in our country, providing tours around amazing ancient temples, the Tonle Sap lake, and other potential tourism destinations,” Samnorp tells The Post.

The brothers also have charitable aspirations, as they use a percentage of their profits to help children living in Tonle Sap’s floating villages receive a better education by donating books and study materials.

Airboats are a giant fan propelled means of transporta used in shallow waters where submerged propellers are impractical. They became popularised by their use in the southern US’ alligator infested wetlands, swamps and marshes.
https://www.phnompenhpost.com/travel/tw ... r-cambodia
Cambodia Expats Online: Bringing you breaking news from Cambodia before you read it anywhere else!

Seeing Siem Reap province, lakes, temples, mountains, from the air.
Posted today on social media. You can book a flight with Eddie on 078941969 for a flight around Tonle Sap and the temples or other special flights by arrangement. 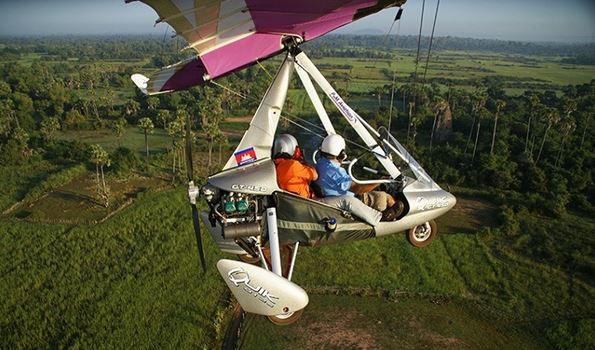 If paddleboarding through nipa palm forests, bathing in Teuk Chhou rapids, waterfalls and zip lining aren’t enough excitement and nature for you when visiting Kampot town, then Daung Te resort may just provide you with that adrenaline fix you crave.

Daung Te resort sits among many other restaurants along Kampot river – about 7km upstream from Kampot bridge – and offers sports activities ranging from kayaking, fishing boat trips, slides, rope swinging and the exhilarating Russian swing that is only for the bravest visitors.

“We opened in December 2017. We have swing, a Russian swing, new floating inflatables and we are installing the second of three slides. This May, we will also add one more twisting slide bought from China,” says the resort’s owner Ly Ratana, standing by a bending coconut tree, after which the resort is named.

At only $3 a ticket for entry and use of the equipment, Daung Te regularly welcomes over 20 visitors per day, most of whom stay to have lunch at the resort’s riverside beach and hut-like bar.
https://www.tourismcambodia.com/news/lo ... ung-te.htm
Cambodia Expats Online: Bringing you breaking news from Cambodia before you read it anywhere else!

Book online and enjoy exclusive savings on G Adventures 14 Day Ultimate Cambodian Adventure. No matter where you travel in Cambodia, the past is always present. History, both ancient and modern, is everywhere here; whether you’re cycling in the shadows of the mighty Angkor Wat, wandering the streets of cosmopolitan Phnom Penh, or exploring the Irrawaddy in search of river dolphins, you can’t escape the pull of time that shaped, and continues to shape, this arresting land. 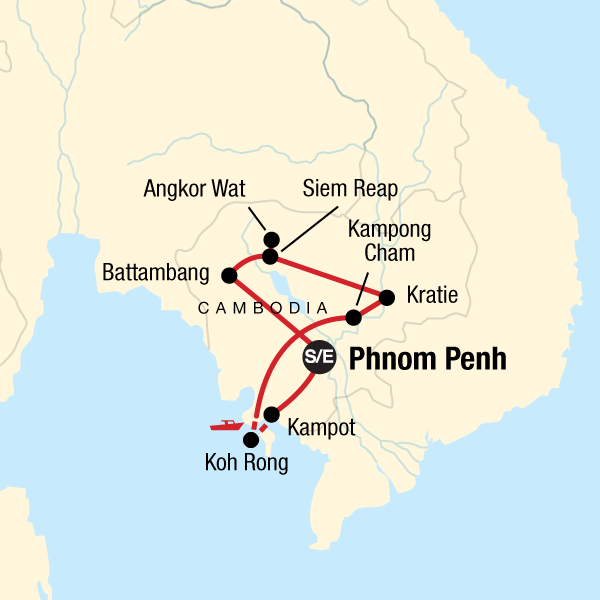 https://www.globaljourneys.com/trip/gadventures-aopp
Cambodia Expats Online: Bringing you breaking news from Cambodia before you read it anywhere else!

Stern's wildest Cambodia
things you never knew existed
places no white man has ever been
remember 'til the day you die
$xxx/day, negotiable 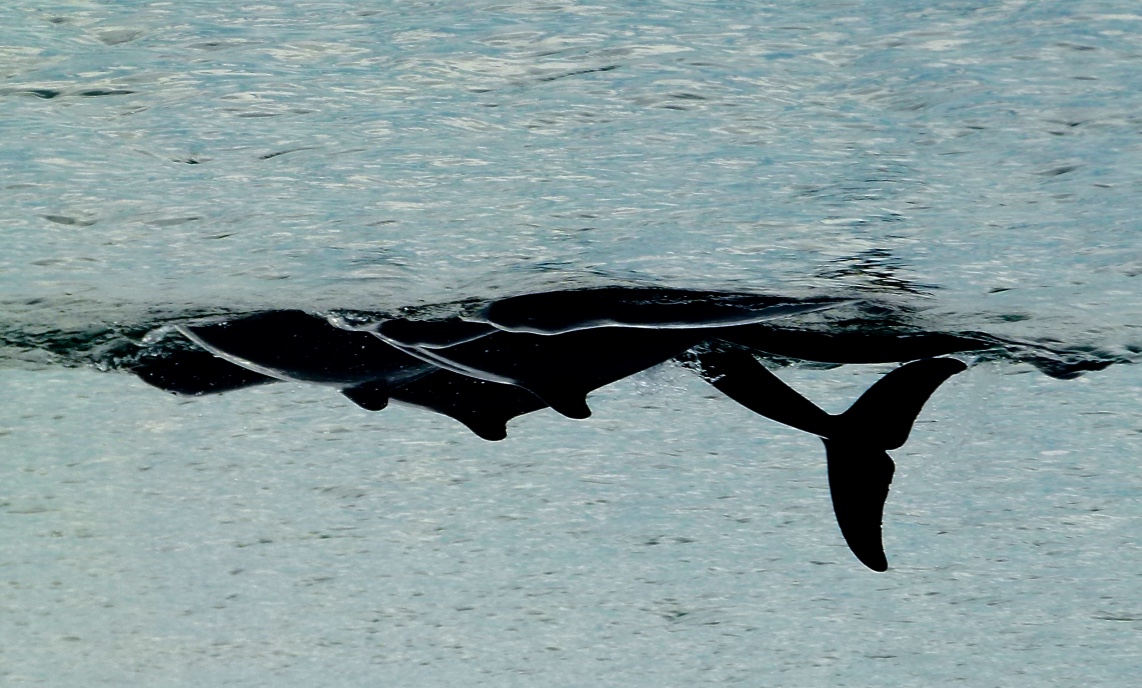 I am myself a past certified outdoor instructor. I don't have knowledge of any outdoor activities, of what qualifications or skills a person has in these activity centres. I have seen many over the border, being Thailand. The one I had visited were run by western instructors.
Then again I would be more happy being led in the Cardamom by a local guide who knew the area. Also I agree with the poster above, I had witnessed myself the aftermath of two teenagers getting into difficulties at a lake, unfortunately one had drowned.
I would seriously consider what I was doing, what abilities and skills one has before undertaking an adventure. Insurance I would think is none existent.
"I am built from every mistake I have made".
Top
Post Reply Previous topicNext topic
24 posts