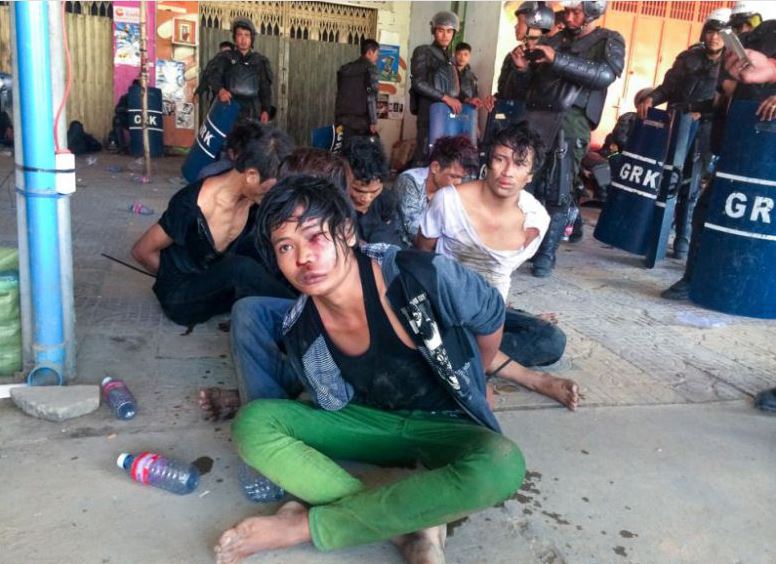 Photo 2014, RFA
Vorn Pov says he was only trying to ease tensions between protesting garment workers and security personnel outside the Yakjin garment factory on Phnom Penh’s Veng Sreng Boulevard on January 2, 2014.

Nonetheless, soldiers from the elite 911 paratrooper unit attacked him, brutally beating him and dragging him away. Photographs of Pov, blood pouring from his mouth, have become synonymous with the violent crackdown on garment worker protests that year.

The next day – four years ago yesterday – authorities launched one of the most violent crackdowns in recent Cambodian memory, with security officials firing live ammunition at protesters, killing four individuals. Another worker, last seen with bloody chest wounds, has been missing ever since and is presumed dead.

For the last three years, Pov has marked the tragic events of January 2014. Last year, he even held a memorial service at his association’s offices where workers put up pictures from the demonstrations and conducted a religious ceremony. The union leader himself displayed the bloodied clothes he wore on the day he was beaten.

But that was not the case yesterday.

“We did not organise any event this year as the political situation is not looking good, and the political climate is heated. It is preventing us from doing any gathering,” he said.

“In the current situation, all NGOs or organisations don’t want to do any gatherings at any public spaces as they have a lot of concerns about our security.”
https://www.phnompenhpost.com/national/ ... tests-pass
Cambodia Expats Online: Bringing you breaking news from Cambodia before you read it anywhere else!

A memorial service which took place on Thursday, 3 January, was interrupted by the authorities for obstructing traffic without permission.

Protest dead tribute broken up
Soth Koemsoeun | Publication date 04 January 2019 | 13:40 ICT
Sen Sok district police in Phnom Penh on Thursday broke up a memorial ceremony marking the fifth anniversary of a crackdown on a protest on the capital’s Veng Sreng Boulevard in 2014 that ended in violence.

Civil society organisations, human rights activists, victims and their relatives holding the memorial said they had been discriminated against by the authorities.

The ceremony was held with the slogan “We Will Never Forget January 3, 2014”, marking the day of the crackdown on a protest by Yakjin garment workers outside the factory on Veng Sreng Boulevard. Four protesters were killed, while the body of a fifth, a teenage boy, is yet to be found.

Sen Sok district governor Mov Manith told The Post on Thursday that police removed the marquee because it had been erected on a public road, thus interfering with traffic, without the authorities being informed.
https://www.phnompenhpost.com/national/ ... ute-broken
Cambodia Expats Online: Bringing you breaking news from Cambodia before you read it anywhere else!