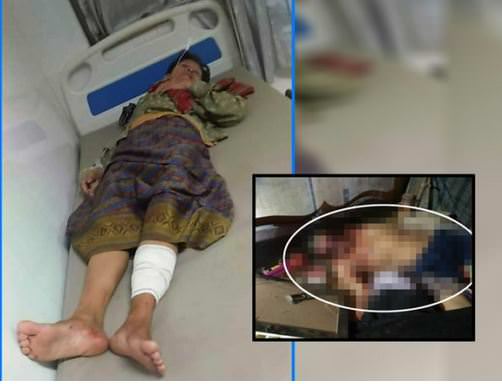 Pursat Province, Cambodia News: At 6:20 pm on November 24, 2018, Boeung Bophoug villagers of Bakan District, attacked the home of an elderly couple, 83-year-old Thuzana, and his wife, Hun Nem, age 72.
The villagers believed that the couple were making their children sick, so a vigilante group of three or four men went to their house, where they killed the man with a knife and left the old lady injured. Witnesses say that there was a lot of bad feeling against the couple, because the villagers were sure that they were using witchcraft.
Police say that this was only a rumor and cannot be true, and the suspects will be charged with the murder of the old man.
Cambodia Expats Online: Bringing you breaking news from Cambodia before you read it anywhere else!

CEOCambodiaNews wrote: ↑
Mon Nov 26, 2018 11:04 am
Police say that this was only a rumor and cannot be true, and the suspects will be charged with the murder of the old man.

So if it were true, and they were indeed using witchcraft, they wouldn't be charged with murder? Interesting....
Top

This case, where an 83-year-old man was murdered last November in Pursat, has caught the attention of international media, who are surprised to learn that sorcery and superstition are alive and well in Cambodia.

Sorcery and black magic are alive and well in Cambodia, and they’re worth killing over
Outbreaks of disease, unsolved deaths or bad luck are often blamed by villagers on witchcraft, and sometimes there are violent consequences
PUBLISHED : Monday, 14 January, 2019, 8:04pm
Phnom Penh seems to have all the trappings of a modern cosmopolitan city: towering skyscrapers, world-class restaurants and painfully air-conditioned shopping malls. But venture a few hours outside the capital and things become different very quickly.

There is, particularly in rural provinces, a pervasive belief in the supernatural in Cambodia. Near the end of November, a couple was attacked in Pursat Province – about 200km northwest of Phnom Penh – by a small mob accusing them of killing someone’s daughter with sorcery. The accused husband, 83, was beaten to death while his wife, 72, was shot in the leg with a home-made rifle.

Alleged sorcerers are often blamed for unexplained deaths, a rash of illnesses or other small-town misfortunes, leading to a beheading in November 2017 and a deadly stabbing in 2016 – just two examples.

Ryun Patterson, a former journalist with The Cambodia Daily and author of Vanishing Act: A Glimpse Into Cambodia’s World of Magic, said there is a large economic element to sorcery incidents.

The poor and disenfranchised often find their belief in magic and witchcraft can explain factors outside their control.

“They look to these people [fortune-tellers and spirit mediums] to give them any sort of sense that things could possibly be better for them,” he said. “They’re in a kind of hopeless situation.”

Bringing up the topic of sorcery in provincial towns is likely to be met with hushed voices and averted glances. Cambodians – even in the capital – are generally religious and hold firm beliefs in the supernatural. Ghost stories and fortune telling are part of life, with many believing a trip to a temple or pagoda, can bring them and their loved ones good luck.
https://www.scmp.com/news/asia/southeas ... mbodia-and
Cambodia Expats Online: Bringing you breaking news from Cambodia before you read it anywhere else!