EZECOM issued a notice on Tuesday that the company is facing DDoS twice yesterday and today and that are two of the biggest attacks in Cambodia's history, even the advanced DDoS Protection Authority could not handle.

EZECOM said that the technical working group and its overseas partners have been active to ease the situation and that the issue will be tackled within one or two working days if there is no further attacks.

A spokesman for the Ministry of Posts and Telecommunications Khov Makara said Tuesday that the ministry had received information on the DDoS attack over the weekend and sent officials of the Information Security Department to work with the ISPs in Cambodia to tackle the issue.

The spokesman explained that DDoS is an attack on data traffic not espionage.

Distributed Denial of Service, short for DDoS, is a type of DOS attack where multiple compromised systems, which are often infected with a Trojan, are used to target a single system causing a Denial of Service (DoS) attack.
=FRESH NEWS
Cambodia Expats Online: Bringing you breaking news from Cambodia before you read it anywhere else!

Yup, internet at work has been gash for two days now. 4G fine though.
Top

This might have been a practice run for a full-on disruption to the US mid-term elections.


US Midterm elections are going to take place on November 6th,2018 and news is out that the election activity could be targeted by a DDOS Attack/s.
Yes, you’ve read it right! Experts say that the results of 2018 US Midterm Polls could be manipulated by state actors from Russia and that’s possible if the voter registration sites of different states are flooded with fake web traffic.

Users of EZECOM, SINET, Telcotech, and Digi, have confirmed difficulties in accessing online services all week, with the biggest problems being reported on Monday and Tuesday.

Local news outlets have called the DDoS attacks some of the biggest in the country's history. According to sources familiar with the matter, DDoS attacks totaling nearly 150Gbps have hit Cambodian ISPs on Monday.

The downtime caused by the attacks have lasted for as much as half a day, and internet access speeds have been slow all week, as smaller-sized DDoS attacks have continued to hit ISPs.

With such glaring issues affecting internet connectivity all over the country, SINET issued a press release on Monday apologizing for the technical problems.

EZECOM issued a similar presser, but the irony wasn't lost on some users, who were quick to point out that EZECOM, a company that provides DDoS mitigation services, wasn't able to safeguard its infrastructure by itself and needed to bring in outside specialists.

The DDoS attacks on Cambodian ISPs were also glaringly visible in internet traffic charts, with big connectivity dips and latency spikes being noticeable right away. 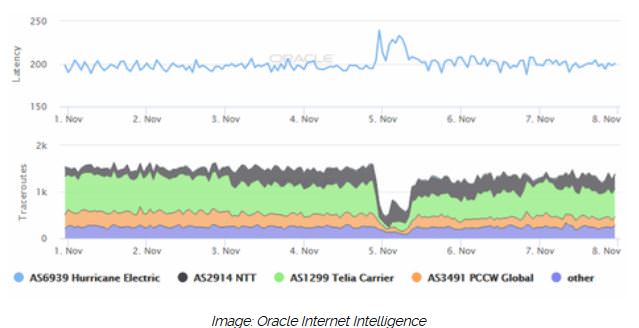 The reasons and motivations for the attacks are unclear. There is currently no political or civil unrest in the country, the ISPs have not reported ransom demands, and no chatter has been observed on social media regarding any hacktivist campaigns.
https://www.zdnet.com/article/cambodias ... s-history/
Cambodia Expats Online: Bringing you breaking news from Cambodia before you read it anywhere else!

My internet (Opennet) has been slow all day. Anyone else?

Is there more ddos happening today?
... give 'em a quick, short, sharp shock ...