Do you have a Cambodian trip report you want to share? Post it here, and feel free to link to your blog if it's a travel blog for Cambodia, South East Asia, or anywhere really. You can ask and answer questions about travel advice in Cambodia or just share your pictures and videos with us. Most people who live in or visit Cambodia have also checked out nearby countries like Vietnam, Thailand, Laos, Myanmar, Malaysia, Indonesia and the Philippines, and you can get to most of these countries by traveling overland, so put any travel plans, reviews or questions here. Discussions about dirt bike trails in here as well.
Post Reply Previous topicNext topic
13 posts

As many of my friends know (from holidays we've spent together) I've always been fascinated by islands . I grew up on one - although unfortunately it was too large to see the edges, which made it a little less exciting than one might expect - even for a child.
And now I’d arrived safely in Phnom Penh, Cambodia, which I was sure was nowhere near the sea, so this naive enchantment lay latent. There was no glittering coastal speck to lure me, and no beach or jetty for idle walks, or so I thought. But I was taken by surprise, because the city in fact sits upon the banks of the Mekong River, and it wasn’t long before the romance of the Mekong, with it’s soft whispering voice, drew me. Looking out at the broad stretch of sparkling water, despite the bright sunshine, it was unclear, in that vastness, whether I was looking out at an estuary, a lake, or a scattering of ocean islands. In my child-like excitement, my curiosity grew. I needed orientation; I needed to know if there really were islands here. I needed a map. Driven by a compulsion to explore, the paper illustration I’d just purchased unfolded in my hands. As the land was revealed before me I scanned it intensely for blueness and all that lay within its watery grasp. Sure enough, I spied islands, river islands.
Something inside me was awoken. My wife smiled at my animation and my small son (and dedicated fellow adventurer) laughed innocently with delight as he raised a pencil to the map. Thinking of how Robert Louis Stevenson must have adored his stepson – he wrote ‘Treasure Island’ for him, I nodded, and his little hand drew a cross on the island.

“But where are we going?” He asked
“How can you ask that?” I replied, “you’ve just marked it on the map”
“Yes, but what’s it’s name?”
I held up the map and examined it, “there’s text printed on it, but it’s too small and I didn’t bring my glasses”, I handed it back to him, “it’s time to practice your reading my little lad.”
He held the map high and inspected it close-up, as smiles chased each other across his eyes, before turning to me in wonder,
“Diamond Island Dad, it’s called Diamond Island.”
The stage was set. Tomorrow we were going to Diamond Island.

I awoke at dawn to a pink, gold and burning red sky, but my mind was not completely there. A yearning hunger had returned and I was once again longing for the water, for the island. How much more beautiful the sunrise must have been from Diamond Island. But as I watched those two sleepers lying peacefully beside me, I knew I must be patient. I mustn’t wake them yet. I cooked instead. They rose around seven. The table was already laid with breakfast, tea and milk. Little legs were fidgeting excitedly as I urged calm.
“Save that for when we arrive, now you can eat your breakfast quietly please”, I told him firmly ,glancing at his mother, who was still somewhere between dream and wakefulness and was best left undisturbed for another twenty minutes.
Soon we were outside, standing on the road. There was slow stream of traffic, early morning sunshine, and a relaxed atmosphere as people had begun to stir and make their way to breakfast, work or school. A tuk-tuk driver pulled up,
“would you like a lift somewhere Sir?”
I waved my hand, “no thank you”.
I knew that the walk would wake my wife up and provide an outlet for the boundless energy of a child. Besides, Diamond Island wasn’t far, and watching this sleepy city come to life was both endearing and captivating. Children laughing in the street, monks praying and offering prayer, the casual smiles of street vendors and their customers as breakfast was served. Even the pace of the professionals and business people seemed cool and breezy. A bridge appeared before us.
“Is this the bridge to Diamond Island Dad?”
“Yes.”
“Why doesn’t the river wash the island away?”
“The river made the island.”
“How can a river make an island?”
“When a river finds a placid place, it slows down and drops sand. Slowly, over thousands of years the grains of sand mount up and an island rises from the water as nature plants trees and people build.”
We’d arrived in Koh Pich. The City Hall stood behind rows of hedge mazes and statues. Mermaids and dolphins. Horses, lions and serpents graced the fountains inviting us to play.
“Dad, we’ve reached the cross, but where’s the treasure?”
“Perhaps it’s in the labyrinth”, I cried as I stepped through a gap in the hedge, “catch me if you can...”
Top

Work on your authentication. Your average tuk-tuk jocky wouldn't even know how to lace up a pair of shoes, let alone address potential clients like some turn of the century Indian coolie.

PS, Whilst we're bullshitting, you should join Strop-meister in his little brain-child endeavor: video-and-entertainment/collaborative-s ... 21864.html

This should tide you over till you find your perfect social club....and Strops thread won't go embarrassingly dormant...two birds / one stone.
Top

I know - it's not really travel writing, but it isn't intended to be. It's fiction. But it is loosely based on a walk down to Diamond Island suggested by lostjeremy, my boy really liked the little mazes.
Top

reminds me of another poster we had on here for a while.
Top

i think he is published

Might have been more interesting.
-
Per ardua, ad stercus
Top

Thanks for your honesty Finbar. I figure something more Hunter S. Thompson-ish would fit in a bit better here. I might try it at some point.
Top

britscienceteacher wrote: ↑
Sun Aug 12, 2018 7:45 am
Thanks for your honesty Finbar. I figure something more Hunter S. Thompson-ish would fit in a bit better here. I might try it at some point.

You're welcome.
Remind me to get "in character" if I'm ever called to read such a thing.
Good luck anyway.
-
Per ardua, ad stercus
Top

Well your in luck cause PP has a nice island with a good sandy beach just a few km up the Mekong about two hours drive in a tuk-tuk. I take my family and kids there every year in about March as at that time of the year the water is nice and clear. 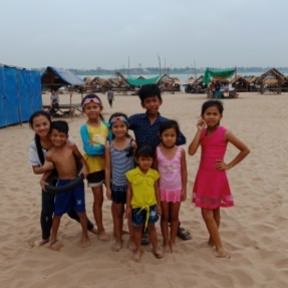 Cambodia,,,, Don't fall in love with her.
Like the spoilt child she is, she will not be happy till she destroys herself from within and breaks your heart.
Top
Post Reply Previous topicNext topic
13 posts